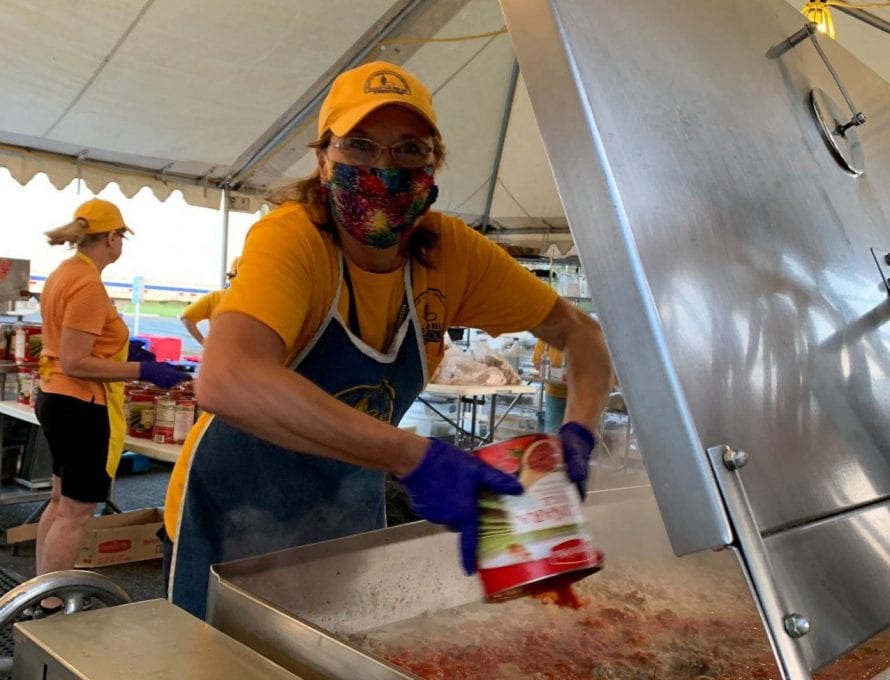 DERIDDER, La. – Missouri Baptist Disaster Relief (DR) volunteer Gina Mabery cooks in a temporary kitchen set up in the parking lot of the First Baptist Church here. She is only one of many Missouri DR volunteers bringing help and hope in the aftermath of Hurricane Laura. As of Aug. 31, Missouri DR had feeding, shower/laundry, incident management, assessment, chaplain and chainsaw teams on the ground here. To learn more, visit www.mobaptist.org/dr/laura. (Photo courtesy of Mo. DR)

ALEXANDRIA, La. (Louisiana Baptist Message) — A little more than a week after slamming the Louisiana coast, it is obvious Hurricane Laura’s 140 miles per hour, Category 4, winds considered nothing sacred, including houses of worship.

Numerous reports have shed light on the hundreds of thousands of Louisianans left without power and water. Power companies have indicated it may be weeks, or longer, before power is restored to certain areas. Likewise, many communities remain under a boil advisory and cars are lined up to receive bottled water and ice from the National Guard and various non-profit groups, including Louisiana Baptist Disaster Relief teams.

However, perhaps as devastating to the state is the destruction to houses of worship, which often are central to the lives of thousands in a community.

According to John Hebert, director of missions and ministries for Louisiana Baptists, approximately 107 Louisiana Baptist churches have sustained damage from minor to catastrophic – and some may not open their doors again.

“We’ve seen reports indicating as many as 140 churches sustained damage of some nature, but we’ve been able to address some of those needs which has brought the total down to 107,” Hebert explained.

Louisiana Baptist state missions staff have spent most of the week since Hurricane Laura’s landfall in the state calling and visiting pastors and churches across the state trying to get an idea of the severity and scope of the damage.

Steve Horn, executive director for Louisiana Baptists, has visited many of the affected areas to encourage local pastors and offer them assistance.

“Our calls and visits are showing 43 Louisiana Baptist pastors sustained damage to their homes in addition to their churches.” Horn said. “Unfortunately, it appears that around 10 of those may be a total loss.

“Pastors are busy helping their members and assisting their communities while attempting to address their own damage as well,” Horn observed. “To say they are stretched thin is an understatement at best.”

Hebert said as reports come in they are prioritized according the severity of the damage.

“Level 3 is for the buildings that have sustained the most damage,” Hebert said. “This includes roofs that are collapsed or missing, large holes in the roofs and extensive water damage resulting from those roof issues.

“Level 2 reflects those with moderate damage including smaller holes in the roof, blown out windows and subsequent water damage. Level 1 is for those who have the least amount of damage,” continued Hebert.

Current reports reflect 38 churches with Level 3 damages, 34 in the Level 2 category and 35 assigned to Level 1.

“We are grateful for all of our state convention, national and local church partners that are assisting in the recovery effort,” Horn added. “While Laura has faded from the headlines, she remains front and center for those of us in Louisiana, and will for months to come.”