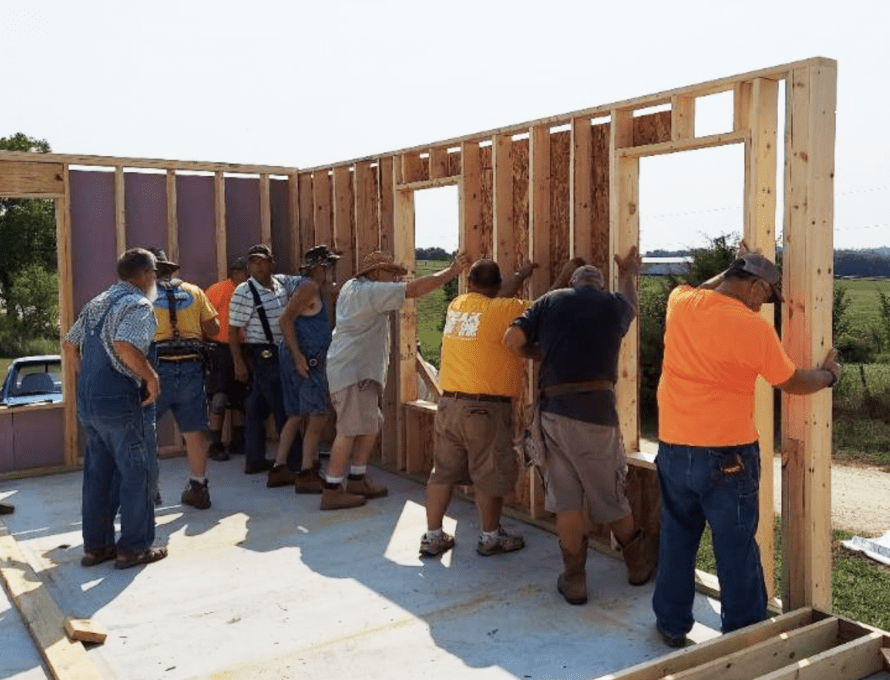 GREEN CITY – The Yellow Creek Baptist Church was established in 1856–soon after pioneers began settling in Sullivan County.  This north Missouri rural church has been ministering to families here for over a century and a half, and they have mostly been in a small church building able to seat about 40 people.

But due to recent growth in membership, they felt the need to have a larger sanctuary and fellowship hall. Missouri Campers on Mission sent workers and in one week in late August a new building was erected and a roof installed over it.

A story of rural church growth

For many years, families moved away from the Green City area to find employment, and church attendance dwindled. Speaking of the congregation just a few years ago, Pastor Randy Quick said, “We had 10 or 12 on a good Sunday, and were elated if we saw 16.”

But as the congregation aged, Quick challenged the church to build a kitchen and bathrooms upstairs so the elderly would be able to prepare and serve dinners, since the church family valued their fellowship time. The faithful members prayed and placed a jar in the front of the church, with the Scripture verse, “Commit your plans to the Lord, and they will succeed” (Proverbs 16:3).

The money came in, and the kitchen and bathrooms were soon built by church members. But the vision was not as big as God’s vision. The members had no idea at the time that God had plans for so much more.

The community began to take notice of the exuberant work of the small congregation and the church immediately started to grow. Within a short period of time, the membership grew from 16 to 60 and then 70, with around 60 attending Sunday worship services. Eight baptisms happened late in the fall of 2019 in a pond over the hill from the church, and another baptismal celebration happened this spring. Six new babies will be added to the church this August and September. The building was now bursting at the seams, with no nursery for the young families. The church needed expansion.

Also, three new deacons were added with the one existing deacon to assist the part-time pastor with the families and church responsibilities.

Again, the church cried out to God to know how to handle this exciting but unknown situation. More space was needed for classrooms, worship services, fellowships and a nursery for the young families joining the church. New teachers and ministry were added with more teachers needed.

As with many churches, the congregation prayed, and the doubting Thomases worried about the money and labor for another expansion of such magnitude, so soon after the upstairs kitchens and bathrooms had been constructed.

As August rolled around, any hope of erecting a new worship center and fellowship hall in 2020 looked bleak.

But then God sent builders from Missouri Campers on Mission. The campers moved in on a Saturday, a church dinner was held on Sunday, the work began on Monday and in a mere five days, three walls went up, wiring and windows went in, roof trusses and the roofing was added.

Pastor Quick praised the team of men from Missouri Campers on Mission who built the structure alongside men from the church. Their wives found work to do in the church basement, where they set up sewing machines to make baby blankets for a local pregnancy help center.

One interesting twist to this story is that Roger Marshall, age 73, a member of the campers group was saved and baptized in this church when he was an 11 year boy in the late 1950’s.

Marshall’s daddy was the pastor of this church for three years and during that time the church expanded by digging a basement underneath the one room church.  Now 60-some-years later, Marshall gets to help the church expand some more. Pastor Quick invited Pastor Marshall to preach in the Sunday worship services on Aug. 30.

Since that baptism, Marshall has been used of the Lord all over the world. He served in churches mostly in southern Missouri, but he also spent 18 years as pastor of a protestant church in Saudi Arabia, ministering to American workers in the oil fields there.  He retired as pastor of Second Baptist Church, Lebanon, and is now a member of Heritage Baptist, Lebanon.

“It is phenomenal to see a church like this (Yellow Creek) when so many country churches are closing their doors,” Marshall said.

“They are expanding and building new additions. They have great services here,” he added.

Marshall has served with the Campers on Mission group for five years.  He’s been involved with building projects in Shelbina, Clarence, Laclede Baptist Association and at Camp Inlow in Bethel Association.

“It is a great bunch of guys to work with. I am glad I could retire with enough health to contribute,” Marshall said.  He has experience with electrical work so they were using him to wire up the building as it was being built.

Men were using a lift truck, loaned to the church by a man from a nearby Baptist church, to lift wafer board sheets to the roof of the church.  Within a few days, the group was lifting metal roof panels up, getting the building “in the dry.”  Yellow Creek men will be able to complete the inside finish work.

The Campers on Mission work was being directed by Stanley Casady, of Columbia.

Leroy Martin, a deacon at Yellow Creek, said the addition will provide for a seating capacity of about a hundred people.  This will about double their capacity.

So a country church that is over 160 years old continues to expand and reach people for Jesus in the countryside of Sullivan County.  Pastor Quick gives all the glory to Jesus. As it should be.