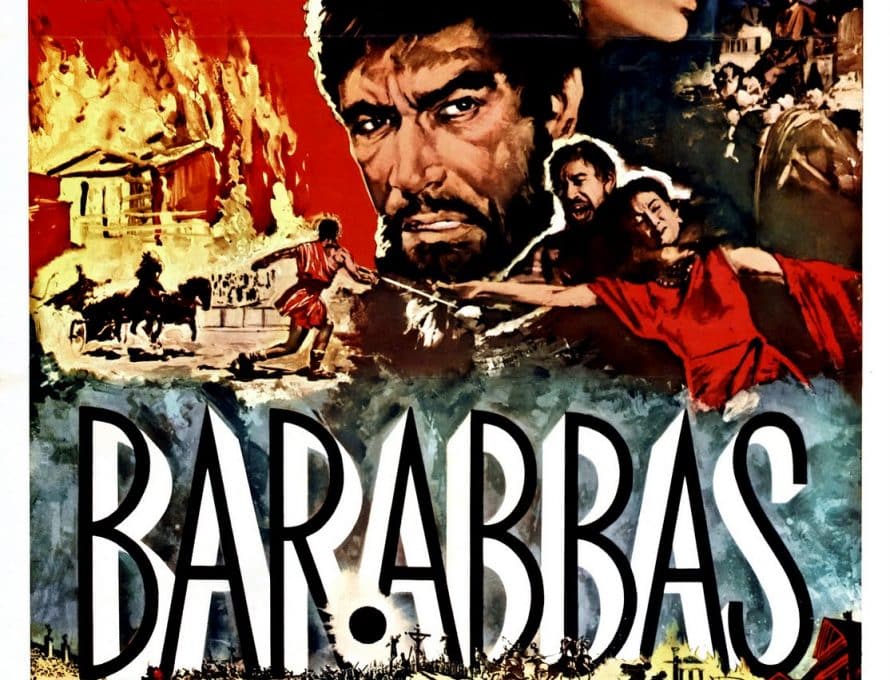 1961’s “Barabbas” is a different sort of “biblical movie.” Hollywood super-producer Dino De Laurentiis gave audiences more of a Bible-adjacent film instead of a true-to-the-Book epic. Instead, it was based on a Nobel-Prize-winning Swedish novel from 1950. I can’t speak for the novel, but the movie jumps off from the point in the Gospel accounts where Pilate pardons Barrabas – “a murderer and a rebel.” From there, it flies off on its own “Whatever happened to…?” tangent.

We follow Barabbas back to his life of crime, then to a sulfur mine where he is imprisoned. The symbolism here isn’t subtle as he very literally descends into a fiery pit with no hope of escape. And yet, it’s no spoiler to say he does escape and ends up in a Roman gladiator arena. Christ’s sacrifice, he reluctantly realizes, means his life is not his own, and it will not end until the Lord’s purpose for him has been fulfilled.

“Barabbas” isn’t shy about the type of story it is. It’s very faithful to the biblical account in one and only one scene, and it just so happens to be the opening one: Pilate releasing Barabbas. Much like “Ben Hur” (which we’ll cover here before the year is out), “Barabbas” is an extended imaginary parable. Its theme and message are very biblical, even if the plot is a figment of Swedish imagination. Unlike Ben Hur, at least Barabbas actually graces the pages of Scripture.

Yes. From an artistic standpoint, this is my favorite “biblical” movie I’ve seen this year. Though it’s far from “devotional” material, it’s a very interesting story. One of the problems faced by works of art based on Scripture is that we know every single plot point before we press play. Here, I did not know what was coming next.

Anthony Quinn (“Lawrence of Arabia”) is frankly stunning in his portrayal of Barabbas, a man who could say in a very literal sense that Jesus took his place. Quinn plays a man plagued by guilt and the knowledge he is unworthy of the literal pardon given through Christ’s death.

Ernest Borgnine has a surprisingly earnest role as an underground Christian in Rome. A shockingly baby-faced Jack Palance shows up as a terrifying Roman soldier. Silvana Mangano plays a Mary Magadalene-esque follower of Jesus who had a prior relationship with Barabbas.

Barabbas frequents a brothel in the early scenes. Though the women there are modestly dressed by any standard and there’s nothing objectionable seen, it’s still very clear just how wrapped up in debauchery Barabbas truly is.