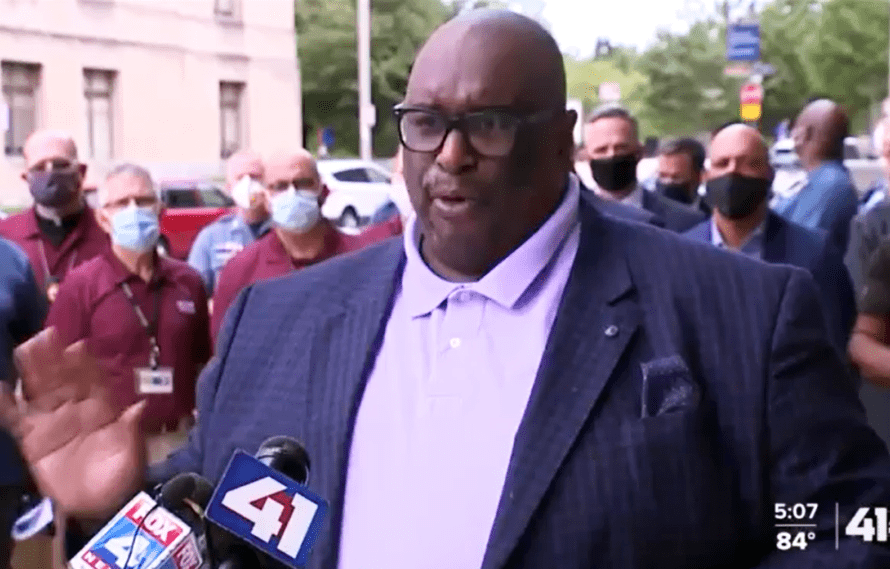 KANSAS CITY – After a year of planning, Pastor Darron Edwards of United Believers Community Church here launched “Getting to the Heart of the Matter,” an initiative to help stop crime before it starts. (Screen capture from KSHB.com)

KANSAS CITY (BP) – Like a lot of cities, Kansas City has seen a dramatic increase in violent crime this year. And at least one pastor is looking to do something about it.

Darron Edwards, pastor of United Believers Community Church, wrote “Getting to the Heart of the Matter,” a 10-step plan designed to get at the root of crime and use relationships and strategic partnerships to stop crime before it begins. The plan launched Aug. 11 and already has 29 faith communities involved.

Edwards, who also serves on the trustee board of LifeWay Christian Resources, said Kansas City has seen more than 120 homicides so far this year, 40 more than the same timeframe last year. In light of the increase in violent activity and civil unrest, he said the plan, which he worked on for more than a year, is needed more than ever.

The initiative’s mission statement reads: “To provide a base of strong support to the community as well as the [Kansas City Police Department]. To establish the Faith community as a bridge between these groups to enhance trust, communication and cooperation.”

For Edwards, the faith element is crucial.

“The faith community has the best attempt to bridge that gap,” Edwards said. “God Himself calls us to be repairers and restorers to the broken.”

“Getting to the Heart of the Matter” empowers churches, working with the local police department, to reach out to their neighborhoods and make the community aware of resources including social workers, housing help, counseling for those dealing with trauma and much more, all with the goal of de-escalating the tension that often leads to crime.

The strategy includes partnering with police chaplains in each area of the city, bringing aid and resources to those impacted by physical and emotional trauma resulting from violence, building meaningful relationships with and mentoring high-risk youth on their terms and in their spaces, identifying unique systemic challenges within each neighborhood, establishing community-based economic development projects and more.

Edwards said churches’ involvement will allow aid and resources to be targeted where it is most needed. Every 90 days, facilitators will meet to reevaluate and make adjustments.

“There is some tension with this program to move into various sectors of the community,” Edwards said. “But it’s not political, and we’re making sure we’re amplifying the voices of the community.”