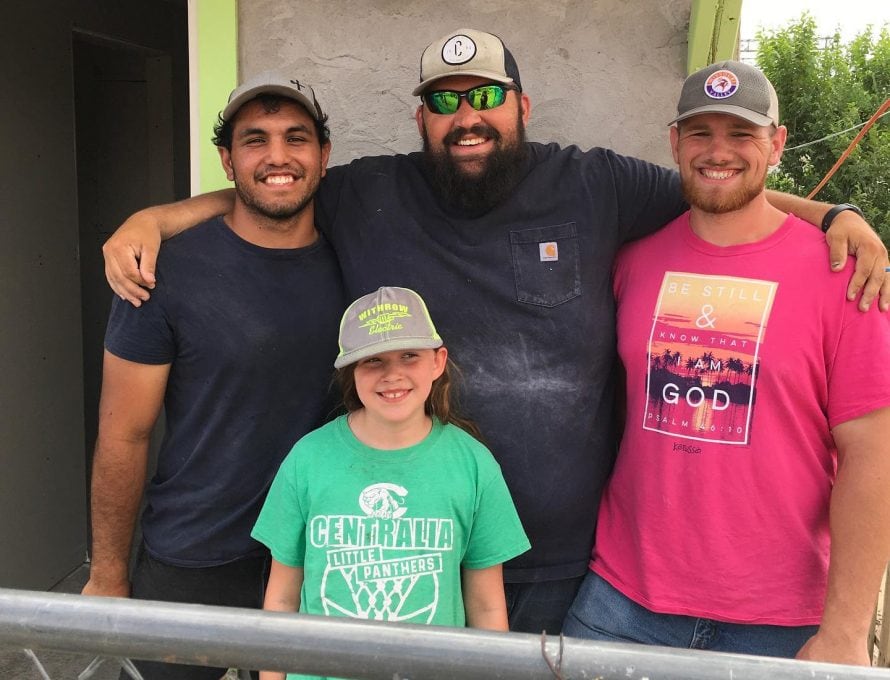 MEXICO – In the past nine years, Scott Westfall has been to Mexico over forty times building homes with Casas por Cristos, an organization that partners with churches in Mexico to build homes for deserving families. “So many things in ministry have started because of these trips,” Westfall says.

Westfall, formerly a youth pastor and now an MBCollegiate Campus Missionary at Missouri Valley College, led teams on two separate trips this summer, one to Juarez and one to Acuna. In Juarez, Westfall and his team built a house for a nonbelieving family on a plot of land that was literally a trash dump just a year ago. In Acuna, they built for a believing family who had lost their rental property and had no real housing options. “Making an impact for these two families to come closer to God is so meaningful,” says Nolan Puletasi, one of Westfall’s summer missions interns who went on both trips.

David Slusher, pastor of Gill Memorial Baptist, brought three youth on the second trip. Seeing the reality of life in a developing country was jarring for them – in a good way – especially in a time when “people have gotten so inward focused,” he says. “When you go to Mexico – to Acuna, Juarez, you realize you’ve never seen poverty in America.”

Opportunities to share the gospel are not lacking on these trips. “Mexico’s not like America,” says Slusher. “When they see white people, that’s pretty shocking. Everyone’s eyes are on us… you take away the barriers and it’s just about serving and loving Jesus and being His hands and feet.”

In the evenings, the teams held worship and devotions outside and shared the gospel with kids on the block. “Kids and adults in neighborhood would see what we were doing,” says Slusher. “After dinner our youth would go out and play soccer with the kids and other young people in the neighborhood. When asked why they were down there, our youth replied, ‘Because we love Jesus.’’’

Building homes is merely a pathway to relationships, many of which transcend distance long after the team has gone home. “It’s more about building relationships than building a house,” says Slusher.

Those long-distance discipleship relationships are what excites Westfall most about returning multiple times a year to the same places.  Four years ago, he made a friend, Ricardo, in Juarez. At the time, Ricardo wasn’t a believer, but “he kept coming back to help us build,” Westfall says. Ricardo has since become a believer and got baptized in March. He helped build on the Juarez trip in June and rode a bus for thirty hours to build with Westfall’s team in Acuna.

By building houses for the families, the teams working with Casas por Cristos not only serve the families but also the local churches. When word gets out that teams have come to build houses, “it begins to spread the word that their local church is making this possible,” says Slusher. “They see that the church is really serving the people.” After a build is complete, the churches often see increased hunger for Christ and church involvement in the community.

Back home, Westfall sees the fruit of these trips producing fruit stateside, too. “Right now, because of these trips, our association is doing Second Saturday Serves because people asked, “Why can’t we do this here?” he says.

The trips have also been a key part of Westfall’s discipleship of his students and summer interns. “The Mexico trip was an eye opener for me to see how vital the gospel is to a different part of the world,” says Puletasi.

“Ministry wise, [these trips] are probably the best introduction for discipleship that I’ve ever had,” Westfall says. “They are very good trips for discipleship and teaching students how to be on mission, not only abroad but at home as well. People need to hear the word and see it in action.”

Westfall is going on a preview Legacy Build Trip October 19-23. He can take any two representatives from a church or college ministry for free, minus the cost of travel to and from El Paso, Texas. Contact him at 314.629.5019 or movalcollegiate@gmail.com.