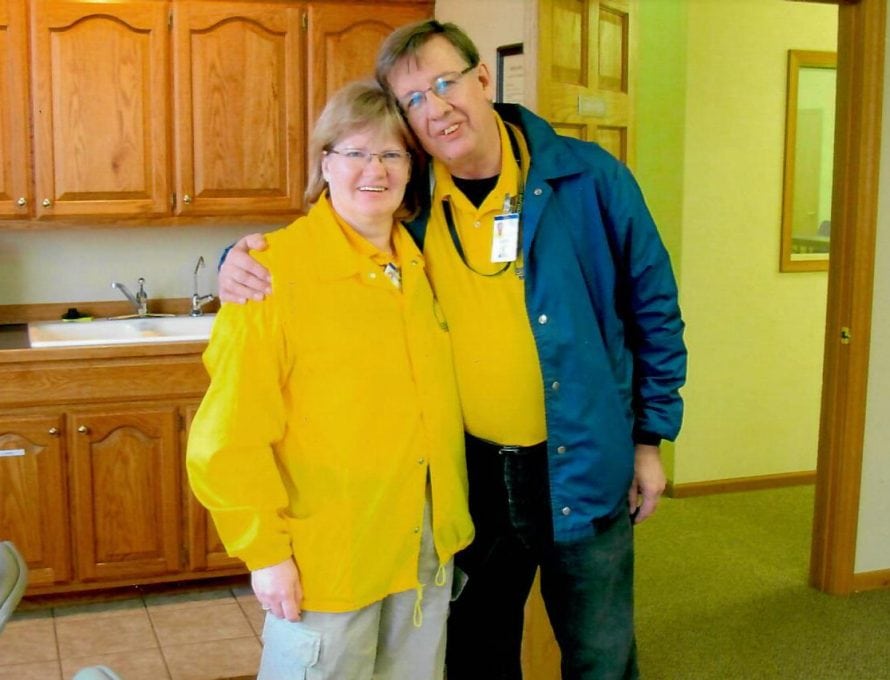 LAWSON – Jerry Palmer said he was going to retire from his association director of missions position and back off from some of his activities with the Missouri Baptist disaster relief ministry.  MBC DR director Gaylon Moss heard that statement and hoped it wasn’t true.  Then Palmer’s wife, Linda, got wind of the story and said to let Moss know they will still be around!

Can you really retire from the ministry?  Jerry Palmer is finding that out as he prepares to step down from being the director of missions for Heartland Baptist Association.  He has been involved in several ministries alongside the association, most notably serving as the state leader of the communications unit of MBC DR.  He has served on the board of Grand Oaks Baptist Assembly and in several other roles in the state convention and the region.

But as he prepares to end 25 years of service with Heartland, he and Linda plan to move to Marshfield and renovate an inherited family home.  They said they are pretty sure they will be one of the first to respond when there is a disaster, if they are needed.

Palmer, age 66, said he was called to ministry at age 15 at Temple Baptist Church, Sullivan, some 51 years ago. He enrolled at Southwest Baptist College (now University) in the early 1970s.  He met Linda and they married.  While in college he was pastor of Pilot Grove Baptist Church, Latham.

During this same time period Palmer got involved with broadcasting and developed a love for electronics.  He worked in several radio and television stations in Sullivan, Bolivar, Springfield and Louisville, Kentucky.  But the call to ministry kept tugging on his heart.

He was pastor of Second Baptist, Ash Grove; First Baptist, Gainesville, and First Baptist, Lockwood.  Then he spoke with the search committee of Heartland Association and became their director of missions while also commuting to Midwestern Baptist Theological Seminary in Kansas City to complete his Masters and later a Doctor of Ministry degree.

“The first church I pastored was in his association and Jerry was a spiritual strength for me. He was someone I could call on and ask for help,” Walker said.

“When I was pastor at Camden Baptist Church, he was there for me when I preached my first funeral,” Walker added. “It was for lost person ad the family was arguing arguing about the deceased man’s possessions. Jerry said just talk about Jesus.”

Palmer is known among Missouri Baptists for his extensive involvement in the disaster relief ministry.

Having a rich background in electronics and broadcasting, he offered to help the MBC put together a communications unit in 2010.  He had been involved in DR since the 1993 flood when he helped with flood cleanup along the Missouri River near Missouri City.

Then he and former DR director Rick Seaton, assembled a trailer full of radios and portable antennas to set up for communications in a disaster zone.  It had a shakedown trial in a 2011 tornado in St. Louis.  But then the Joplin F-5 tornado hit and Palmer was on the ground assisting with communication for 12 days.

“We didn’t know what we were doing. We were testing out equipment. DR really went to school in Joplin.  A lot of what we do now really came out of the Joplin experience,” Palmer said.

He added, “The communications unit has nine radios of various kinds, amateur and business band. There is a receiver for a cellular network called FirstNet, which is reserved for first responders.  A satellite dish for HughesNet provides a backup for Internet service for the unit and the incident management team for the DR teams.”

Palmer said in the disaster relief ministry people are much more important than paperwork.  He found that out in a DR tornado response in Marshalltown, Iowa.  He was monitoring the radio and doing administrative work when he heard a local HAM radio operator ask for some help over the local HAM radio repeater.  Palmer said he almost blew it off, but he stopped and responded to the man.

It turns out he needed help and had rigged up a makeshift antenna to his handheld radio to transmit his call. Some of the DR team members were quickly dispatched to his damaged home.  One of the men led the gentleman to the Lord.  Palmer made a visit later and they had a lot of similar experiences with HAM radio to talk about.  As Palmer left, the man hollered “God bless you.”  And then he added, “A week ago you wouldn’t have caught me saying that”

People matter to Palmer. He said, “I like to be thinking about things that are outside the four walls of the church building. If we believe Acts 1:8 we begin with local but then we are ministers who extend out to the world.”

He led his association to take several mission trips to El Salvador as well as Guatemala, Mexico, Honduras and Nicaragua to share the gospel.

His wife, Linda retired about a year ago as the association ministry assistant.  She had previously served as an assistant at Midwestern Seminary and had taught school.

They will be finding ways to engage in ministry in Marshfield and Springfield.

It won’t take them very long, no doubt.