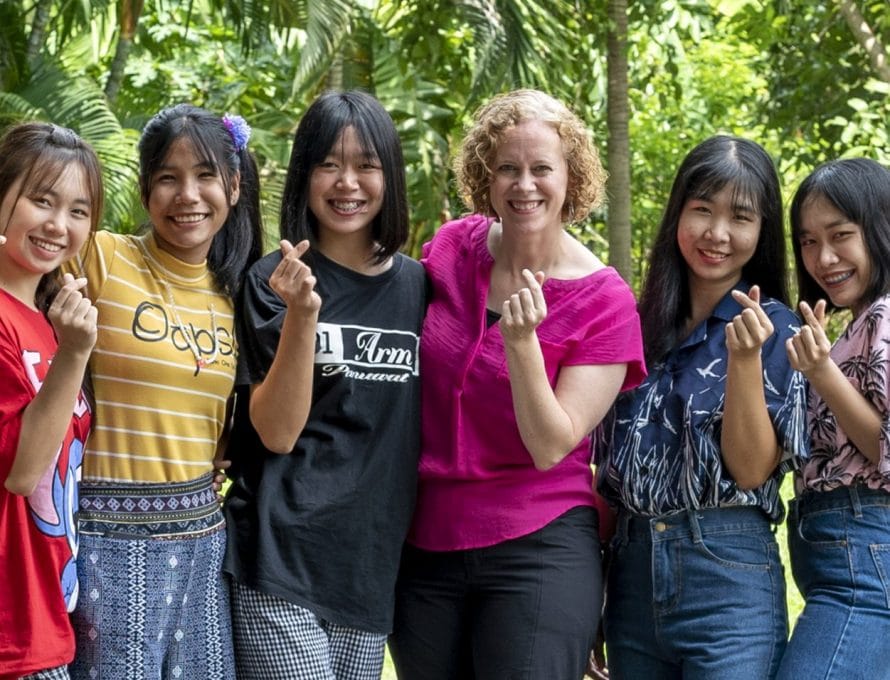 THAILAND – IMB missionary Angela Dawson and the girls who call her “Mom” make a common hand sign for “love.” Though the girls in the house may come and go, the house is always full of love. “God gave us to each other,” Angela says. From left to right: Thip, Ann, Earn, Angela, Prame, Noi. (IMB photo)

THAILAND (IMB) – The words weren’t easy for Angela to hear: “If you go back as a single career missionary, you probably will never get married.” She understood that her adviser wanted her to consider the sacrifice she might have to make by committing to long-term missions. A one-way ticket to another country could greatly decrease her chances of meeting a husband and having a family.

“It was a count-the-cost moment,” Angela says, though she was not deterred from God’s call on her life.

In 2010 she was appointed by the IMB as a career missionary to Thailand and she built a fruitful ministry working with medical clinics as a translator and leading English camps in local elementary schools. She started her service in a rural area, but after a diagnosis of Meniere’s disease, which causes her vertigo, she moved to a town where she would be closer to the medical care she needed.

She also moved to a larger home and it didn’t take long for her to find out how God intended to use the house for ministry. As she was moving in, she heard about a 15-year-old girl, Ying, whose mother wanted her out of the house.

“My daughter is such a burden to me. Can you take her?” Ying’s mother asked Angela’s supervisor, Doug Derbyshire.

Wanting to protect this frightened teenager, Doug arranged for Ying to move into a dorm-style room at a guest house the team uses for volunteers. But Angela couldn’t imagine how scared this girl must be. She felt the Lord telling her to open her home.

Ying moved in, and the following week, Ying’s friend, Ploy, asked to move in too. Ploy’s family had sent her to work at a truck stop. Fleeing the terrible conditions, Ploy returned home only to face the anger of her parents. Her father beat her, claiming that she was refusing to support the family. With nowhere else to turn, she went to Angela’s house.

Ying and Ploy decided on their own to call Angela “Mom” from the very beginning. For Angela, God was making it clear that He was building a family she didn’t expect.

Angela was adjusting to two teenaged girls in the house when a third girl needed housing. Ann attended the church’s youth group but was not a believer, and her words and actions were evidence. Angela says that when they first met, Ann cursed a lot, was often angry, and could be very mean to other people. But she was a friend with the other girls and Angela wanted her to feel welcome. After a weekend slumber party at Angela’s house, Ann began to stay over more often. Soon she asked if she, too, could move in. Since her family was very poor, Ann’s departure would give them some relief.

Angela moved two sets of bunk beds and a spare mattress into her second room to make room for the girls and the extra company who often joined them on the weekends. She also converted a small office space into a room for Prame, a high school senior, who was living with her grandparents. Prame wanted to study and go on to college, but her grandmother was cruel toward her and made it very difficult for her to focus on school. Prame moved into the small office space and became one of the family. In Angela’s home, Prame had peace and encouragement in her schoolwork.

In December 2017, the year God first began to build this new family, Ying and Ploy left Angela’s house and never returned. At first, everyone was concerned, but later Angela found out that they were safe but were choosing to live a life apart from God. Angela missed them, but in the spring, God led another young woman to the family.

Noi had recently moved to the city to work as a nanny. Angela’s home and family were a perfect match for her. Noi was a brand-new believer and was seeking growth in her faith.

“This turned into a good time of discipleship,” Angela says of Noi’s move to the house.

As the leader of this family, Angela says that she has a few rules, but is glad that, for the most part, the girls have been very compliant.

“They have to help me clean the house and do dishes. And they have to go to church and have a quiet time,” Angela says. “And no boys in the house!”

Angela supports them as any mother would – making sure they have lunch money and school uniforms, reminding them to study and taking time to listen to them. Since going out for lunch is not expensive in Thailand, she takes the girls out to eat every day. She also provides food for the house and the household items they need. Angela explains that some of these girls could not afford to eat three meals a day before they moved into her house. Their lifestyle now, though simple, provides more than they’ve ever had.

“It’s nice not having an empty house. I like having them around,” Angela says of her family, which she is open to expanding. “I don’t have any limits about how many can be in the house. My home is open.”

Angela knew what she might be sacrificing when she chose to make Thailand her home for the sake of the gospel. She’s grateful that God planned for her to be a mom after all.

This article was written by Leslie P. Caldwell, a writer for the International Mission Board of the Southern Baptist Convention.