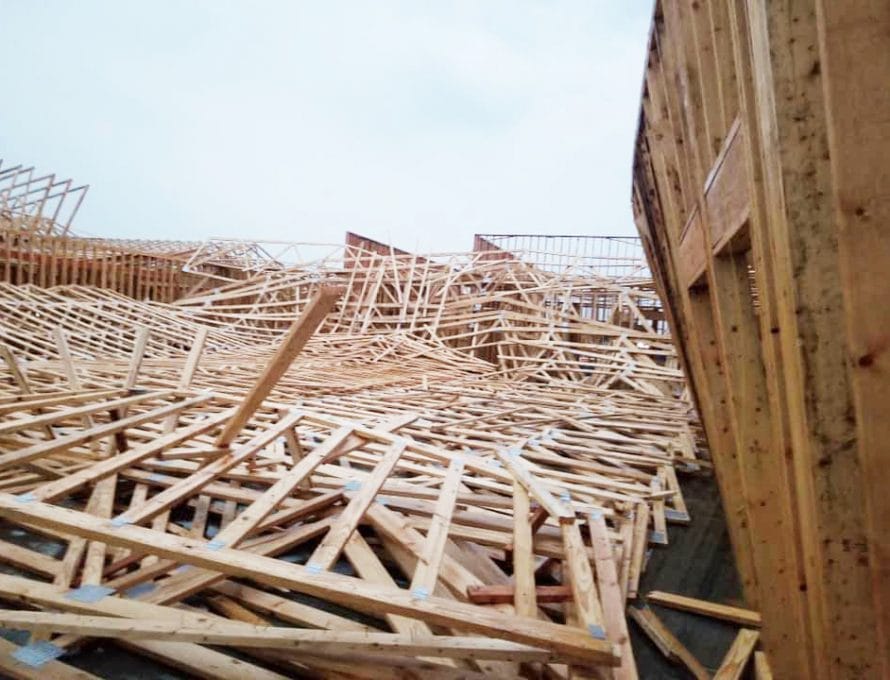 LATHROP – Though a wind burst toppled the framework of the new building at the First Baptist Church here, Pastor Ron Malott says the church still stands strong in the Lord. “The Lord is doing a work here,” he said.Photo courtesy of First Baptist Church, Lathrop

LATHROP – The First Baptist Church here faced a setback in completing their new building when a storm toppled the newly constructed frame of the building, July 1. But, according to Pastor Ron Malott, the church still stands strong.

Malott said a nighttime storm likely sent powerful bursts of wind that leveled much of the timber framework, even as construction teams from churches in various states were in the area to work on the building. This was the second time this summer that a burst of wind had set them back on construction.

Malott said that, hopefully, insurance will cover material and labor, which would recover the costs the church had acquired by the time the storm hit. He also expressed his gratitude for churches and individuals throughout the state who have offered their prayers and help.

Though the church has felt some discouragement because of the storm, they have also been blessed during this time, Malott added.

“This has been a blessing for people to know that the church is not a building,” he said. “The church is the people. We’re looking forward to the building, … to what it will give us for ministry and all of that.

“But it has been a blessing to understand that God is the Lord, and we’re His people, and we’re more important than a building. But the building, when it’s done – we’re praying that God will use it for His glory. So it’s exciting.

“The Lord is doing a work here,” he added. “It is exciting to see what God is doing and to see the way people (from the church) are stepping up in ministry.” ν