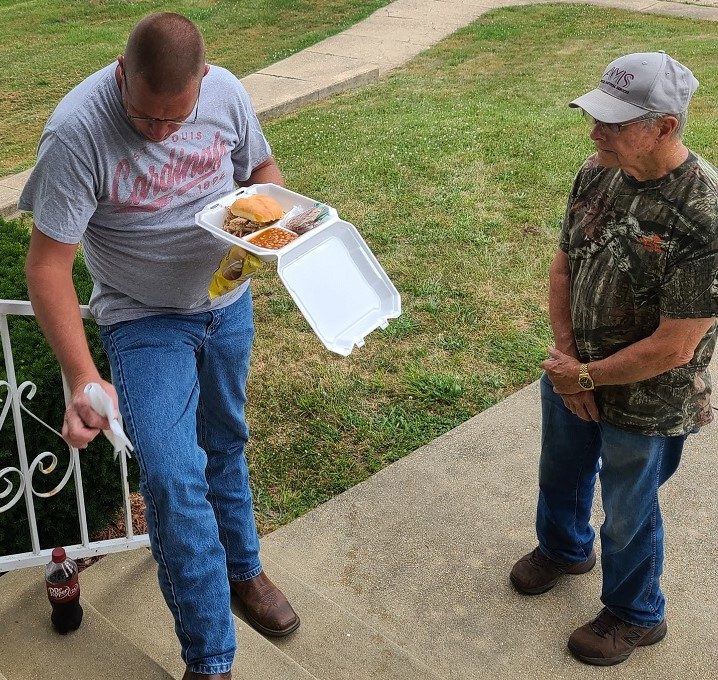 LESTERVILLE – The sirens were silent as the emergency personnel arrived at Fellowship Baptist Church of Lesterville on June 27.  The group of first responders was invited to enjoy a meal of appreciation.

“This dinner was originally planned for March; we wanted to reach out to them,” Daniel Sparks, pastor, said. “Then, when COVID hit, we had to postpone the dinner.  Now, first responders are given a black eye and we need to lift them up and care about them and to appreciate what they do.”

Dan Garrison, deacon of Fellowship, served as a “runner” for the dinner.  Garrison described his job as “visiting with the first responders and helping them enjoy the evening.”

Garrison explained why the Brotherhood group wanted to serve the first responders.  “Right now, in our country,” he said, “first responders, especially police officers, are getting negative press.  We want to show support for law enforcement and to respect them for what they do.”

In planning the dinner, Fellowship prepared with precautions for COVID-19. The invitation issued to the sheriff’s department, fire department and healthcare first responders highlighted a “no touch” dinner. The grills were busy at the church to prepare pulled pork sandwiches.

“First responders were encouraged to go off to eat,” Sparks said.  “We provided boxed dinners and our servers wore masks and gloves. We have some members of our church who have been trained in disaster food relief. So they provided direction.”

Both Garrison and Sparks agreed that the meal was delicious, and the first responders seemed to enjoy it. “In addition to the pulled pork,” Sparks said, “my wife. Kimberly, and Terry Bryant made fresh, homemade buns for the dinner.  My daughter, Alisha, and Terry also made the cookies for dessert.”

Garrison also emphasized the impact that the dinner had on the congregation of Fellowship.  “This ministry brought the church closer together,” he said.  “It let people know that God’s got this and our faith was strengthened because ministering and helping other people does that.”

Sparks pointed out another advantage of the dinner, “It meant a lot to the men in the Brotherhood ministry,” he said.  “Holding the dinner did a lot to help them be known in the community.”

“Before he came,” Garrison continued, “our little church would have closed with COVID-19.  But, he has great ideas and he wants to lead us to reach people.  Our community has a small population (about 200), but we are on the Black River and during the weekend or on a holiday, our number swells to about 10,000.”

Garrison reported that since the pastor began his ministry at Lesterville, the worship service time was switched to 9 a.m. for area visitors to hear the service before they begin recreational activities for the day.  According to Garrison, the pastor also has a greater social media presence, including a daily Facebook Live Bible study with his wife called, “Coffee in the Word.”  Since Sparks arrived, the Fellowship service is broadcast over 89.3 FM within two miles of the church.

“We want to take advantage of every opportunity to reach the community,” Sparks said.