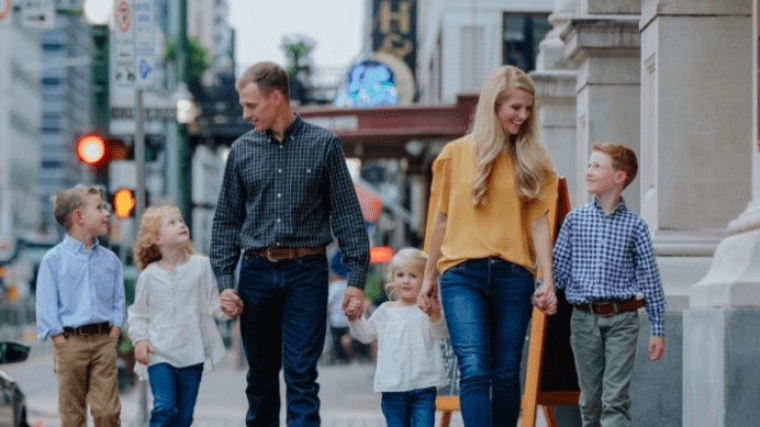 Southwest Baptist University alumnus John Powell, alongside his wife Katherine, and their four children, Gunner, Bennett, Ada Kate and Reese. Powell was killed, July 18, while helping a stranded motorist on the highway in Sherman, Texas. (Photo from www.gofundme.com.)

BOLIVAR – Southwest Baptist University (SBU) alumnus and Southern Baptist church planter John Powell, 38, was killed on July 18, while helping a stranded motorist on U.S. Highway 75 in Sherman, Texas. Powell graduated from SBU in 2005 with a degree in biblical studies, and at the time of his death he was serving as pastor of Emmanuel Baptist Church in New Caney, Texas.

According to local reports from television station KXII, Powell was one of two men who stopped to help a motorist whose car had caught fire after an accident on the highway. “Police say one of those two men” – namely, Powell – “saw a semi-truck coming toward them on the highway and pushed the other man out of the way to save him,” station KXII reported, adding that Powell was then “hit by the semi and died at the scene.”

According to the Houston Chronicle, Powell urged his congregation, during his final sermon, to show that sort of compassion that he displayed on the highway prior to his death.

“How,” he asked his church, “could we pray that God would have compassion on those that need it while not having compassion on them ourselves? It would be like praying for someone who got robbed and beaten and thrown into a ditch alive while we pass on our way to wherever we’re going.”

Southwest Baptist University professors and alumni are among those who expressed grief after hearing of Powell’s death.

Bing Bayer, professor of biblical studies and Hebrew, said John was the kind of person you will always remember after meeting him.

“He had an infectious smile and winsome personality which drew people to him naturally and immediately,” Bayer said. “He loved the Lord and the Bible and was dedicated to serving the kingdom of God.”

“In Hebrew class one day, we discussed his love of hunting turkey, and I gave him a copy of the Missouri Conservationist magazine which had a story about and a cover depicting turkeys. The next day in class, I was amused that he had covered his Hebrew grammar book with that picture of the turkeys.”

Matt Kimbrough, assistant provost for spiritual formation and division head of the Redford Division of Christian Ministry, ministered alongside John a few times while he attended SBU.

“What struck me about John was his unwavering integrity in all things,” Kimbrough said. “John loved Jesus and refused to allow anything to derail God’s mission for his life. In a time when selfishness and division plague our nation, John modeled the fruit of the Spirit by stopping to help a person in need. His death was a shock and should prompt us all to pray steadfastly for his family, but we also rejoice that John now stands face-to-face with the One he so passionately worshipped.”

SBU alumnus Andrew Walker, professor of ethics and public policy at the Southern Baptist Theological Seminary, wrote on Twitter, July 19, “I am heartbroken about my friend, John Powell. … He was humble, kind, wise, passionate, a renaissance man, a pastor , a husband, a father – a Christian. Jesus, welcome our brother John and be with his dear family.” Walker also started a memorial fund for Powell’s family on gofundme.com, which had raised $198,830 by 10 a.m., July 21.

“Karen and I were devastated this morning to learn of the tragic death of our good friend, John Powell,” Allen said in a July 19th message on Twitter. “John crammed more fatherhood, husbandry, friendship, and gospel service into his limited years than most men will in their lifetime. He live life to the fullest for Christ – and for others.”