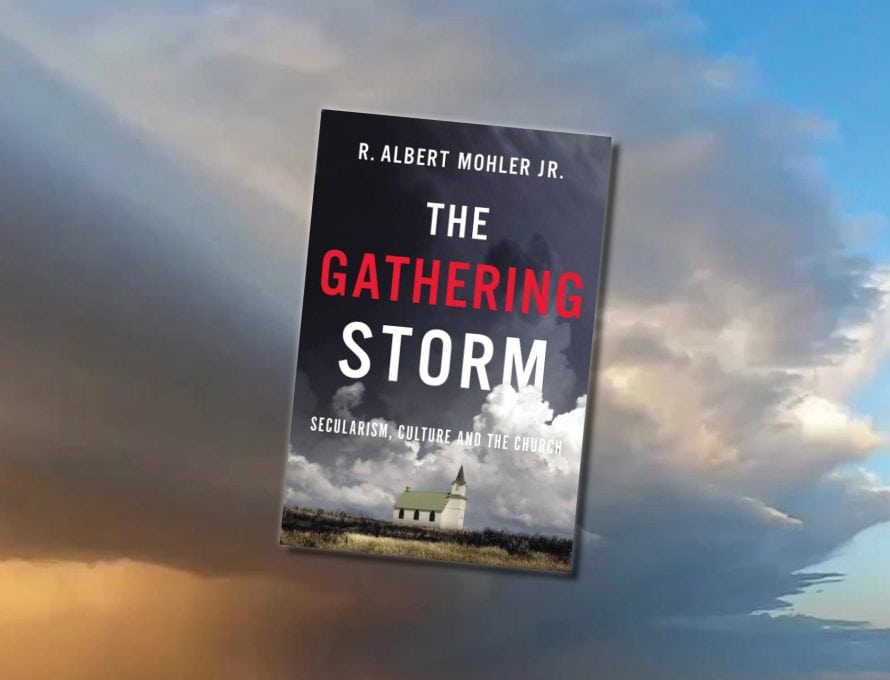 LOUSIVILLE (BP) – Over the last 100 years, a cultural, moral and political shift has taken place in Western society that has led to broad devaluing and rejection of Christian truth claims, both privately and in the public square, R. Albert Mohler argues in a new book, The Gathering Storm.

He asserts that the place of Christian convictions within Western society has gradually eroded, and says this erosion will have monumental effects on modern society. In the book Mohler, president of The Southern Baptist Theological Seminary, lays out evidence for how this shift has reshaped and will continue to reshape society.

The book was released June 2 by Thomas Nelson and is available at Amazon.com and major booksellers everywhere.

“In every generation, Christians have been called upon to understand our responsibility for the particular cultural moment and context within which we find ourselves,” Mohler said in an interview with Southern News. “This has been true throughout the history of Christianity. But when we look back at church history, there have been times when there was a particular urgency about asking the question of our responsibility, because the culture had experienced such a massive transformation.

“It’s not just the transformation of the culture in the big tectonic plates of economics and politics, but also at the deeper level of morality and even the understanding of reality and the consumption of truth. There are times in which it seems all of these things are coming together, and that’s exactly what characterizes our time.”

The title of the book is taken from the first volume of Winston Churchill’s history of World War II. Churchill was largely alone in seeing the evidence for the oncoming conflict that would ravage Europe from 1939ñ1945. Christians today, Mohler argued, must also see the coming conflict between those who hold to historic, biblical Christianity and a Western society that rejects and condemns those claims.

“Like Churchill, Christians need to see and understand the gathering storm in our own day,” Mohler said, “and then we need to step into the next responsibility, which is thinking seriously and biblically about what the times will require of us. …

“My ultimate confidence in writing The Gathering Storm is that Jesus Christ is Lord, and thus no storm will mean the end of Christianity, the end of the Church, or the end of truth.

“Nevertheless, a gathering storm can represent a real and an unavoidable challenge for us. Through its 20 centuries of existence, the Church has had to face all kinds of storms. When you think about our particular cultural moment, we are being told that we are on the wrong side of history, that we hold positions that cause human suffering and unhappiness rather than human flourishing. But we must recognize this: Christianity was born into a hostile culture.”

Over the last few years, Christians in the West have experienced growing disgust and even anger at their religious convictions by some in the culture. This hostility can have serious consequences for Christians in this life. Livelihoods can be taken away, and friendships broken. This hostility is real and can cause tremendous heartache. But, Mohler said, such hostilities do not hold the final verdict on the Church.

“God is sovereign over the times, as He is sovereign over all things,” Mohler said. “We are not in this time by accident, but we’re also not in this time without the lordship of Jesus Christ, the power of the Holy Scriptures, the saving truth of the Gospel, and the reality of the Church of the Lord Jesus Christ, remembering that Christ said, ‘Upon this rock, I will build my Church and the gates of hell shall not prevail against it.’ We are not without the confidence that we are on the right side of history, because we are on the right side of eschatology.”