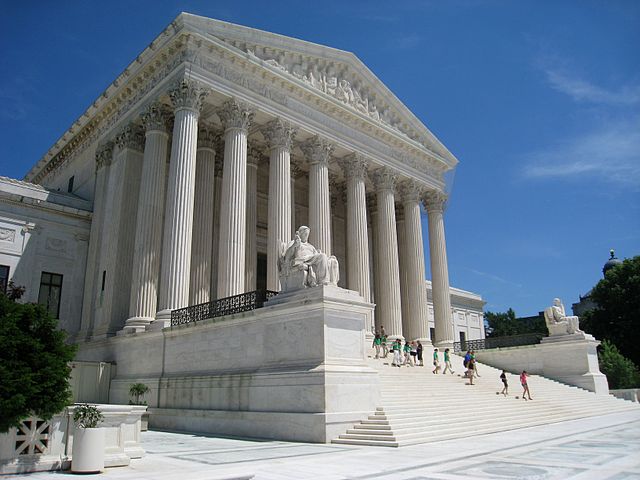 The high court voted 5-4 to overturn a Montana Supreme Court decision that invalidated a state program that provides a tax credit of up to $150 for a donation to a Student Scholarship Organization (SSO). Contributions to SSOs finance scholarships given to families for student tuition at private schools of their choosing. The program approved by the state legislature includes Christian and other religious schools.

The Montana high court invalidated the entire program in a 2018 opinion because the law includes religious schools. In overturning a lower court decision, the Montana justices said the plan violates the state constitution’s “no-aid provision” regarding religious schools.

That prohibition is one of many Blaine Amendments enacted in the 19th Century that discriminated against Catholics and have been used against school-choice programs, according to the Institute for Justice, which argued in behalf of the program before the federal high court. Blaine Amendments — named after a U.S. senator who introduced a similar federal amendment — exist in 37 states, according to the institute.

Describing it as “the right decision,” Russell Moore — president of the Southern Baptist Ethics & Religious Liberty Commission (ERLC) — said the scholarships in Montana’s program “were not a funding of religion, nor an entanglement of the state with the church. The issue here is whether a state-established scholarship program for private schools could discriminate against parents who chose to send their children to private schools that happen to be religious.”

The opinion “is consistent with long-held American principles” that have been reaffirmed recently by the justices, Moore said. “Blaine Amendments have not advanced the cause of keeping distinction between the church and the state, but instead have resulted in often arbitrary and incoherent policies that are needlessly discriminatory.

“As a Baptist committed to a free church in a free state and to the separation of church and state, I believe this ruling maintains those right freedoms and boundaries.”

The high court’s decision is “as much of a certain death blow [to Blaine Amendments] as we could have asked for,” said Diana Verm, senior counsel at Becket, a religious liberty organization.

“Our Constitution requires equal treatment for religious people and institutions,” she said. “The Court recognized the bigoted history of the Blaines, and that history makes them unconstitutional to the extent that they are used to discriminate against religion. It was high time for the Blaine Amendments to bite the dust.”

“The Free Exercise Clause protects against even ‘indirect coercion,’ and a State ‘punishe[s] the free exercise of religion’ by disqualifying the religious from government aid as Montana did here,” Roberts wrote. “The no-aid provisions of the 19th century hardly evince a tradition that should inform our understanding of the Free Exercise Clause.

“A State need not subsidize private education. But once a State decides to do so, it cannot disqualify some private schools solely because they are religious.”

In support of the court’s ruling, Roberts invoked a 2017 decision that defended the right of religious bodies to participate in government programs. In that decision, the high court ruled in a 7-2 opinion the state of Missouri violated the right of Trinity Lutheran Church of Columbia to exercise its faith freely by barring it from participating in a government-run, playground-resurfacing program.

The Trinity Lutheran decision came to “the ‘unremarkable’ conclusion that disqualifying otherwise eligible recipients from a public benefit ‘solely because of their religious character’ imposes ‘a penalty on the free exercise of religion that triggers the most exacting scrutiny,'” Roberts wrote. “The Montana Constitution discriminates based on religious status just like the Missouri policy in Trinity Lutheran, which excluded organizations ‘owned or controlled by a church, sect, or other religious entity.'”

In a concurring opinion, Thomas said the Supreme Court still needs to address its interpretation of the First Amendment clause prohibiting government establishment of religion, because it “continues to hamper free exercise rights.” The justices’ “overly expansive understanding of the [Establishment Clause] has led to a correspondingly cramped interpretation of the [Free Exercise Clause],” he wrote.

In his dissent, Breyer contended the Montana case is more like a 2003 decision out of Washington state than the Trinity Lutheran ruling. In Locke v. Davey, the Supreme Court ruled in a 7-2 opinion the state could bar a student from a scholarship program because he chose to major in pastoral ministries.

Unlike in Trinity Lutheran, the question in the Montana case “boils down to what the schools would do with state support,” Breyer wrote. “And the upshot is that here, as in Locke, we confront a State’s decision not to fund the inculcation of religious truths.”

The Southern Baptist, father-and-son law team of Michael and Jonathan Whitehead — co-counsels for Trinity Lutheran who practice in the Kansas City area — praised the high court’s new ruling as “another victory for the principle of equal access” for religious individuals and institutions.

Meanwhile, Americans United for Separation of Church and State criticized the decision.

The opinion “corrupts the foundational principle of church-state separation. … This court has overturned decades of precedent in an effort to privilege certain religious beliefs and have them dominate our civic life,” said Rachel Laser, Americans United’s president.

The ERLC signed onto a friend-of-the-court brief filed by the Christian Legal Society that urged the Supreme Court to reverse the Montana high court’s decision. The brief said the discrimination called for in the state court’s ruling “violates the fundamental principles of the [First Amendment’s religion clauses]: Government neutrality and private choice in matters of religion.”

The ruling came in Espinoza v. Montana Department of Revenue.