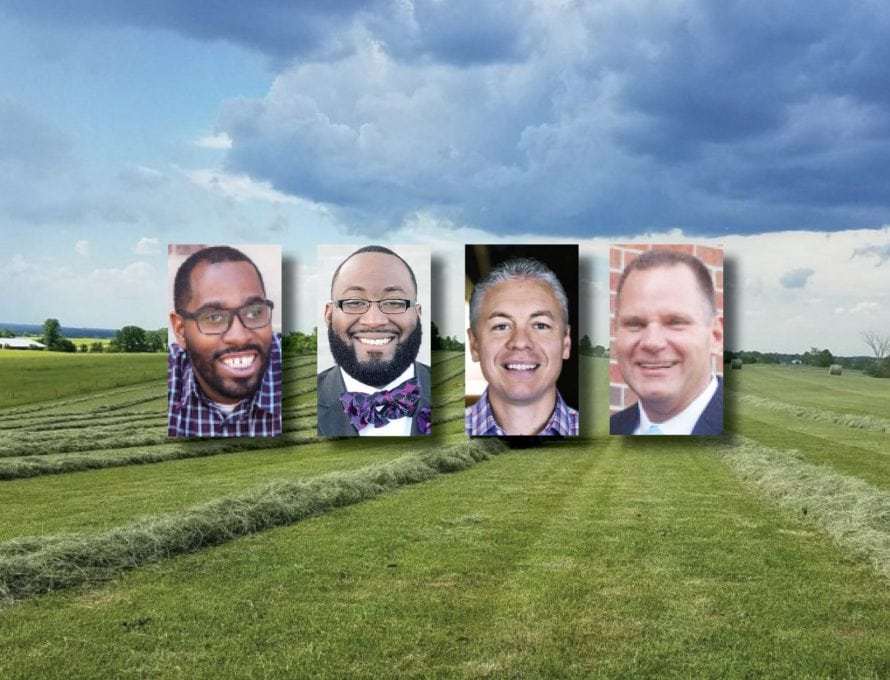 Mike Byrd and Jon Nelson joined Ken Parker and Jeremy Muniz for the 90-minute event. Byrd is pastor of Faith Community Bible Church, St. Louis. Nelson pastors Soma Community Church, Jefferson City, and serves as the first vice president of the Missouri Baptist Convention. Parker pastors First Baptist, Kearney, and is a former president of the MBC. Muniz pastors Ridgecrest and is the current MBC president.  The event was an extension of an ongoing conversation and friendship the four men have cultivated over the past several years.

Muniz began the evening saying the conversation was “in some regards about contemporary events” but more “about the gospel, and how the gospel can truly be the difference maker in all that we’re experiencing today as a culture. The four of us believe that this is an opportunity for us to tell people about Jesus and to show the world that He is the answer.”

Topics ranged from the four men’s past experiences to reconciliation, injustice, lack of respect for civil authority and how the gospel offers a solution.

Nelson noted the increase in empathy he has seen from his white brothers and sisters due to recent events, but said the cumulative effect the last few weeks have been draining.

“I know a lot of my white friends have been pouring empathy out – more empathy than I’ve ever seen before, which has been a beautiful thing. But it’s exhausting from the perspective that I feel like I need to educate my white brothers and sisters, while at the same time this has been a reality for me for my whole life.”

To illustrate that, Nelson told of how on June 1, he and his wife attended a protest at the state Capitol. On the way there, he spoke with Jefferson City’s mayor. When she asked him for his opinion on current events, he replied that it reminded him of similar events that took place 50 years prior.

“What’s sad to me is my mom went to Lincoln University, where our church serves,” he told her. “I remember as a kid coming back to the Jefferson City-Columbia area, and she would tell me about going to the Capitol building, state troopers being out there, being tear gassed while protesting as part of the civil rights movement. What’s scary to me is I’m parking right now and I can see the state Capitol, see the state troopers, and I can see the same protest 50 years later.”

After thanking the troopers and National Guardsmen there for protecting his first amendment rights at the protest, Nelson had to leave early after a young man connected to his church was shot and killed across town in an unrelated incident.

“The last two weeks trying to bounce back and forth between those two (situations) has just been exhausting,” he said. “Exhausting and not sleeping, worrying about the world that my little boy is going to grow up in. My mom used to say, ‘I’m sick and tired of being sick and tired.’ That’s where it is. That does not mean that I will give up the fight. I will not. This is a gospel issue. And we [the Church] are the only ones with the answer.”

After all, the civil rights movement, Nelson said, began in the Church.

Byrd echoed the sentiment of exhaustion, especially when the desire to preach a simple, straightforward gospel message must take on a different attitude to an audience feeling pressure, frustration and anger. The cure, he said, is relationships.

“Being an African American over the last couple of weeks, being a pastor, a father, a husband, a friend, has been difficult,” he said. “Imagine being on Zoom, hearing your brothers crying, hearing kids and moms broken because they fear for the life of their husband or their son while trying to shepherd their heart to be reminded of the gospel, while you’ve got to wrestle through your own feelings too. Here I am pointing the people of Faith Community Bible Church to the gospel, when for a moment I’m wrestling through, ‘Is the gospel really enough? Because it’s not even helping me right now.’ Only to have to wake up and do it again and do it all over again.”

“I think that we’re angry not because there’s not enough African Americans [preaching the gospel], but because our white brothers and sisters don’t open themselves up enough to hear from other African Americans. … The problem is we don’t want to go outside of our circle, to meet people and to build a relationships with people who don’t think like us. We’re much more comfortable making assumptions than sitting down and just getting to know people.

Part of the racial divide, Muniz said, is not such much a black/white issue, but an urban/rural one. North St. Louis and rural Missouri are totally different worlds, and there are many churches “that can do ministry for 100 years and never have a meaningful conversation with an African American,” he said. That, he continued, leads to a lack of empathy.

Parker, whose church is in the Kansas City metro area, is also father to a police officer. That gives him another perspective on the complex and constantly changing issues facing the nation.

“It’s different than what [Nelson and Byrd] are dealing with, but there are similarities,” he said. “Because just like you guys talked about: worrying about your kids as they grow up… my kid is a grown man but there’s concern and worry related to this because of the way things have gone in our nation. What I have said even to our own church family, is that broad brushstrokes miss the details. The idea that, ‘All black people…’ and you fill in the blank, or, ‘All white people…” or, ‘All Republicans…’ or, ‘All Democrats…’ miss the details. It really is tragic that we, as a culture, have not gotten to the point where rather than lump all people into whatever category, we recognize here’s a man, here’s a woman, here’s a child.”

Police officers, including Parker’s son, are also “exhausted,” he said, from a different angle.

“He called me after [the news of George Floyd’s death] and said, ‘Dad, you know I would never do that to a human being,’” Parker said. “It’s tragic that he lives with the mindset that people think that all police officers fit into that category. So I worry about things from a different perspective, while trying to share whatever a white guy can of the burden that my black brothers carry.”

The conversation concluded with a discussion of what churches can do to be part of the solution to the unrest and uneasiness that has marked 2020 thus far. Both Nelson and Byrd agreed the gospel must guide Christians’ responses.

“We must not be scared of the culture, and go far enough to speak so our brothers or sisters of color all around this nation can hear clearly that not just black lives matter, but that Christ is the solution to what this country has in our original sin,” Nelson said.

Byrd responded that “we have got to stop going to church and be the Church. That means when your family says something crazy at the Thanksgiving dinner, be willing to walk away from the table if they don’t get it right. Be willing to have the conversation, yes, but don’t laugh at those jokes. Be willing to lose something to grow in other places. We’ve got to be willing to be uncomfortable. … Don’t only focus on sharing the gospel, but focus on developing people to live the gospel.”

The complete conversation is available to watch at https://www.facebook.com/ridgecrestbaptist.