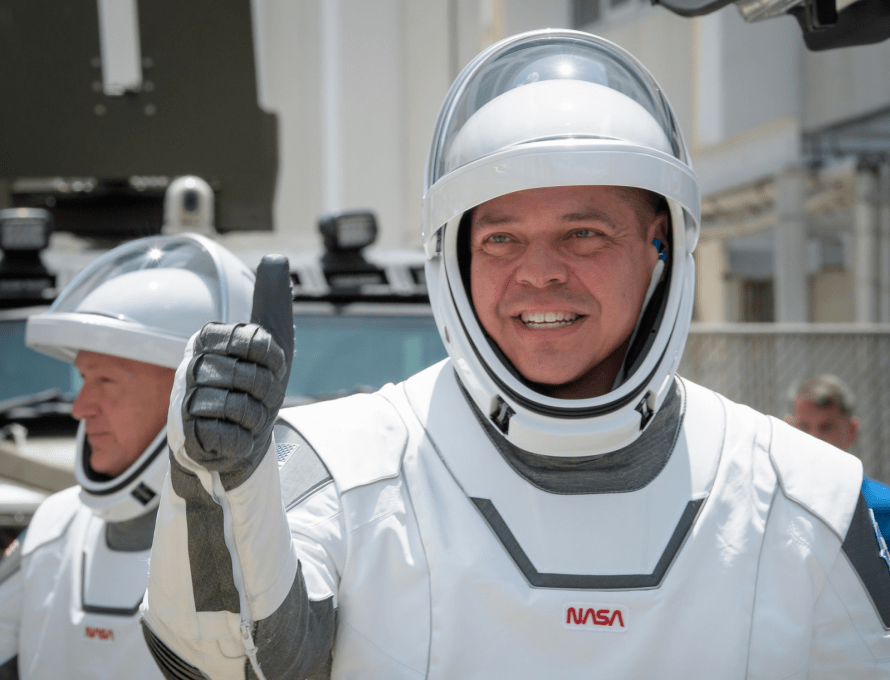 CAPE CANAVARAL, Fla. – NASA astronauts Robert Behnken of Missouri, foreground, and Douglas Hurley, wearing SpaceX spacesuits, are seen as they depart the Neil A. Armstrong Operations and Checkout Building to board the SpaceX Crew Dragon, May 30. NASA photo

ST. LOUIS – During the 1990s, Jerry Deese was part of a team at McDonnell Douglas Research Laboratories that partnered with NASA on various engineering problems. His resume features phrases like, “equations of fluid mechanics at speeds ranging from subsonic to hypersonic,” and “nonlinear partial differential equations based on explicit time-stepping techniques and including models for turbulence and non-equilibrium chemical kinetic effects.”

But while those phrases are incomprehensible to the layman, one of the research projects was on something the average man or woman on the street can now comprehend; their goal was “kind of like” a reusable rocket that landed vertical and upright.

“That’s a tricky thing,” he said, “to land a vehicle that’s shaped like that.”

And not just because SpaceX engineers tackled a sort of similar problem to the one he worked on decades ago.

“The SpaceX launch system was designed for ferrying cargo into space and was adapted to carry astronauts,” Deese said. “So it was actually developed mostly by private industry for a general cargo carrying facility and now we’re able to use it to ferry astronauts to the space station. So that’s a big step forward and gets us back into the business of taking our own astronauts to space rather than relying on Russian launch vehicles. A Falcon 9/Crew Dragon successful flight [initiates] a new era in space travel.”

And since the rocket lands and is reusable, similar missions promise to recover 80 percent of the equipment costs for each mission. That’s another big step forward, and it all adds up to more missions, more exploration of space and seeing the wonder of the heavens.

“As Christians, we see the universe we live in as God’s creation,” Deese said. “Scriptures like Psalm 19:1-6, and Romans 1:18-21 talk about the physical world being a revelation of God’s glory. While mankind in general has a curiosity about the world around him and the desire to explore it, for the Christian there is the added benefit of gaining a better understanding of God the Creator through exploring His creation.” ν