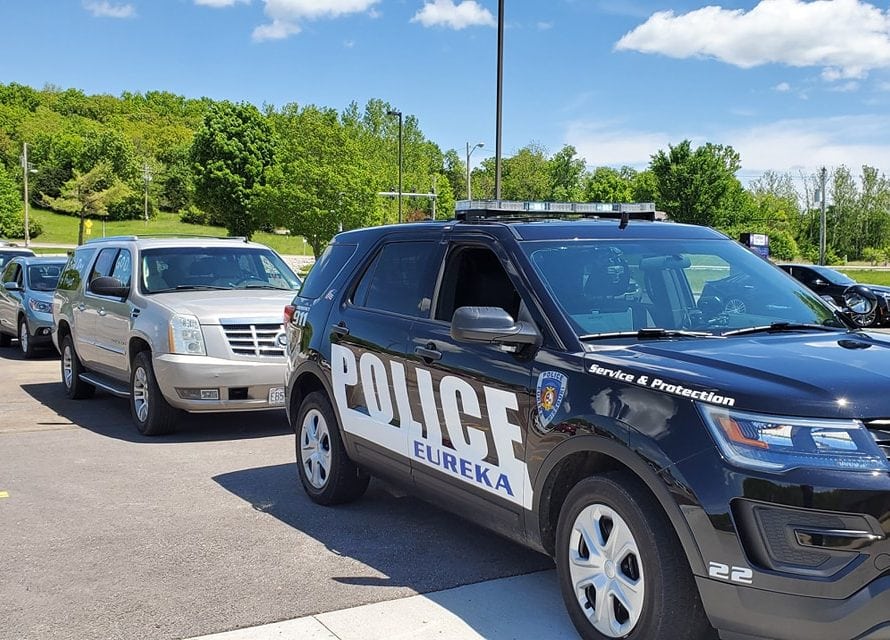 EUREKA – Cars lined up in the Eureka High School parking lot before an emergency vehicle led them through Eureka for a National Day of Prayer driving event. Submitted photo

EUREKA – When the virus pandemic canceled the National Day of Prayer event here, May 7, several Eureka churches found a way to take prayer out of city hall to the streets.

The ‘prayer drive out-and-about’ was the idea of Lisa Gard, wife of Central Baptist pastor Dennis Gard, who organized the event.

“Usually, we have a prayer breakfast with the mayor. With the COVID-19, that wasn’t possible this year. Mayor Sean Flowers loved the idea (of praying and driving) and promised administrative support,” Rev. Gard said.

At least three of the other churches in town, including sister Missouri Baptist Convention Genesis Church, a Methodist church, and a Catholic church also participated.

On May 7, there were 65 cars gathered in six lines the Eureka High School parking lot for the prayer drive out-and-about. Plus, each line was led by a Eureka police or fire vehicle sounding an occasional siren to draw attention. Each line covered a particular route in town. Cars had positive prayer messages on windows.

Eureka is in St. Louis County where the virus has hit hard, and where social distancing and self-isolation is strongly encouraged.

“It was in the tradition of prayer-walking, but social distancing made this (prayer driving) necessary,” said Genesis pastor Mike Hubbard.

Central’s Jill Blaylock has served as coordinator for Eureka’s National Day of Prayer in the past. She distributed a list of ways to pray for the neighborhoods by landmarks – children, when playground equipment was seen, police and fire departments when hydrants were seen, essential workers when delivery trucks were seen, the senior class when Class of 2020 signs were spotted, etc.

A local Methodist church is the site of the local food pantry, which has seen an uptick in demand with the COVID-19. During the prayer driver, food was collected by the last vehicle in each line. More than 60 food bags were collected.

Gard expected only about a third of the participating vehicles.

“The only people that got out of their vehicles (on the drive) were those collecting the food,” Gard said.

“It was nice the churches worked together,” pastor Hubbard said. “Praying for the city was key. It was a sense of connection and beauty.”

“We had good feedback on social media. We’re open for discussion about how we’ll do it next year,” Gard said.