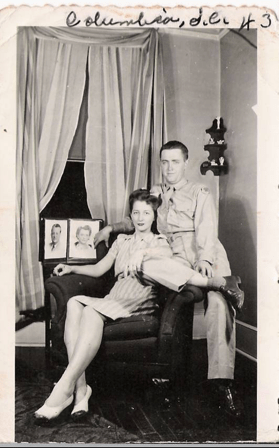 KANSAS CITY – Hunkered down in his home for the past couple months because of the COVID-19 pandemic, Matt Marrs nevertheless traveled back across both space and time because of a family treasure – namely, dozens of 75-year-old letters from the World War II era – that he received from his late grandmother, Ruby Furr.

During the pandemic lockdown, Marrs pulled out a magnifying glass and began to organize the letters and inspect them, one by one. And he made some incredible discoveries: For example, in late 1944 and early 1945, his late grandfather Dick Furr was sent on a special military assignment away from his unit – only to discover after his return that his whole unit had been taken prisoner during the Battle of the Bulge.

“When my grandfather escaped capture, the wives of these other men who were captured didn’t have any source of information for what had happened,” said Marrs, who serves as the North American Mission Board’s director of the Midwest region. “So they began to write my grandmother, asking if she had any information on the whereabouts of their husbands who were prisoners of war.”

Eventually, these imprisoned soldiers and husbands were liberated, Marrs added. “They all wrote letters to my grandfather, talking about their experience as prisoners of war.”

After finding this network of letters, Marrs wasn’t content simply to file them away. Instead, he began to seek out the children and grandchildren of the men and women who had corresponded with his grandparents. Soon, he found a few of them online and sent them scans of the letters their family members had written. He plans to send them the hard copies of the letters, as well.

Marr’s new acquaintances were excited to hear about the letters. One of the women he contacted has no memorabilia from her father’s WWII experience, making the letters particularly significant for her.

For Marrs, reading through the letters has also put the present moment in perspective, as well.

“Reading how hard it was and how much sacrifice they made during that time,” Marrs said, “it makes our current situation not as dire as sometimes we think it is.”