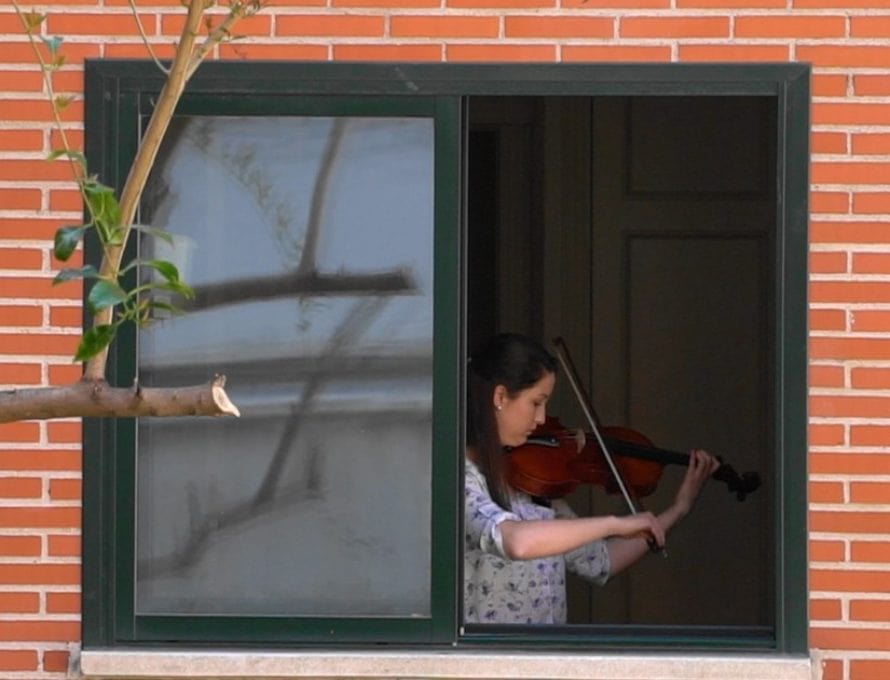 MADRID (BP) – Quarantine. Lockdown. Unable to leave your apartment. Not exactly the ideal recipe for large-scale gospel sharing in difficult-to-reach Spain, where less than one half of 1 percent of the population have a personal relationship with Christ.

Enter God into the equation, though, and we see how the power of the sung Gospel on Easter morning poured through the open windows of more than 300 apartments where IMB missionaries Caleb and Carina Beaty live and minister in their barrio of Madrid.

With Caleb on the guitar and Carina on the viola, their voices united to the words of “Oh Praise the Name/Anástasis” as they sung in Spanish of the death, burial and resurrection of Christ on what is known in Spain as “Resurrection Sunday.” Their audience? Hundreds of neighbors leaning out their windows facing the joint courtyard shared by four, seven-story apartment buildings.

“It was very emotional,” said Carina. “I was trying not to cry, but the Gospel is so powerful. When do you ever get the chance to lean out your window and proclaim Christ to such a large audience attentively leaning out their windows? It was such a powerful picture, for us here in Spain, to be able to offer the Gospel literally to all of our neighbors at the same time!”

The lockdown in Madrid began in mid-March.

“Our next-door neighbor and her children, who study at the music conservatory, decided to do a mini classical music concert every day at 1 p.m. from their open apartment window,” Caleb said.

Soon windows opened daily all over the courtyard to the sounds of oboe, flute and viola.

“At first people would listen, applaud and then go back into their apartments,” Caleb said. “But bit by bit, it became a community event, with people waving, saying hello, shouting each other’s names, singing ‘Happy Birthday.’ Then a WhatsApp [text messaging] group started, and more and more of the neighbors were added to the group. They would upload photos and videos from the daily mini-concerts, updates on those who were sick from coronavirus, words of encouragement.”

This is extraordinary, Caleb said, considering that in Madrid it is very hard to see your neighbors in these massive apartment complexes. Even a Spanish friend mentioned to him that he’s lived in his building for eight years and still hasn’t met any of his neighbors.

“The virus has brought us together,” Caleb said. “Doors are opening to relationships; we’re getting to know people’s names through the text group and even writing back privately words of thanks and encouragement. When we learned the property manager was in ICU with coronavirus, we were able to write to him personally and a correspondence began.”

Such inroads are rare in post-Christian Spain, as is the breaking down of barriers to the Gospel.

“I knew Easter was approaching, and I thought we could use this music time to proclaim the Gospel through song to our neighbors,” Carina said. “So I got in touch with the neighbor who was doing the daily mini-concerts and said we were thinking about playing a song on Resurrection Sunday. I told her it was a song we sang in church. And she was happy to have us join in.”

“We came to Spain, sent by Southern Baptists, to proclaim the Name. But when you’re quarantined, it’s difficult to do that,” Caleb said. “But God put us in this very building, living right next to the lady doing the music. He is the One who opened it up to be part of what He’s doing here.”

The Beatys, who arrived in Spain in the fall, spent two weeks practicing the song, working on vocabulary and pronunciation in their new language.

Carina admitted they were nervous, but added: “We knew the Lord was going before us. After days of rain we woke up to bright sunshine and blue skies. We knew God called us to do this, even if they closed the windows and shut us out, literally.”

With Caleb in one window with his guitar, and Carina in the other with her viola, they introduced themselves to their neighbors, and said that since it was Resurrection Sunday, they had a song they wanted to sing for them.

“They clapped before we even began to sing,” said Carina with a laugh. “And as we began to play and sing, instead of windows closing, more windows began to open — windows that had never opened before! Everyone was leaning out, listening.”

“And the Gospel was proclaimed so clearly,” Caleb said. “There wasn’t even the usual echo! The Lord cleared the air so people would understand the words. The usual roar of helicopters and ambulances was momentarily silent while we sang.”

As their song finished, and applause rang out, Carina went into playing “Amazing Grace” on her viola, which was met with another round of applause.

Afterward, the response of gratitude from the neighbors through the Whatsapp group was immediate: “A perfect song for Easter;” “Emotional;” “Beautiful.”

One neighbor even commented he heard Andrea Bocelli sing “Amazing Grace” that day at the empty cathedral in Milan. “Bocelli copied Carina’s song,”the neighbor said. “But with our audience and Carina, we did it b