HUNTSVILLE – There’s something fitting about having an old-fashioned revival service married with the modern technology of living streaming.

That’s what happened when First Baptist Church here hosted an online revival service six nights in a row in April on Facebook Live. Pastor John Rhodes never felt a clear direction from God about any one single preacher to invite, so he invited six preachers his congregation was familiar with to deliver the Word virtually, each from his own home. 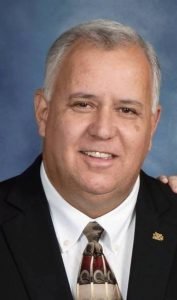 “We need a revival in the home, so it makes sense,” Rhodes said. “God gave us a timeout to spend time together as a family. If we didn’t take advantage of that to address families’ spiritual needs, we’re missing out.”

Each night featured an introduction by Rhodes – just like a traditional in-person revival meeting – as well as special music by a guest, in this case, the group Endless Highway. Each message included discussion questions so families could discuss the content after the service.

Obviously the virtual nature of a Facebook video revival meeting meant none of the fellowship and contact that normally go with a revival, but there were certain advantages.

“It was the cheapest revival we’ve ever done,” Rhodes joked.

“There’s no way we could have fit that many in our sanctuary,” Rhodes said. “If we had 100 a night (at a traditional in-church revival) we would have been doing good. We reached people we weren’t reaching before, some people who never would have darkened our door.”