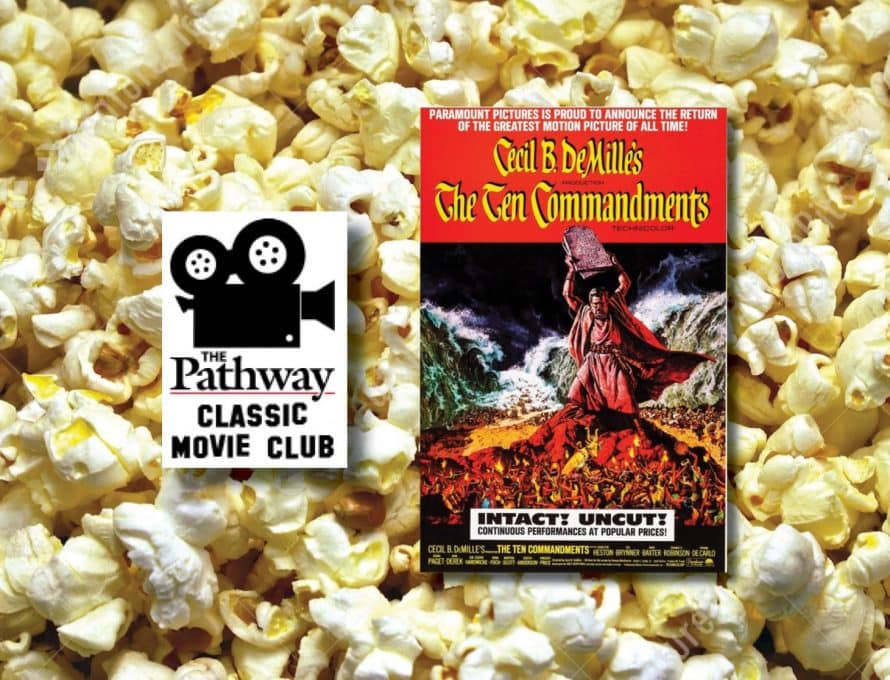 I had one movie in mind when I pitched The Pathway’s Classic Movie Club, and that movie is 1956’s “The Ten Commandments.” It remains the quintessential “epic” movie, and is Cecil B. DeMille’s crowning achievement. Even the secular world recognizes its value; there’s an excellent chance you watched the movie on ABC this weekend, a Passover/Easter tradition since 1973.

Like his version of “Samson and Delilah” seven years before, DeMille brought professionalism to the film. He assembled a crack cast, including Charleton Heston (Moses), Yul Brynner (Pharaoh), Anne Baxter (Nefertari) as well as Vincent Price and Edward G. Robinson. Together, they bring us not just the story of God’s Law carved into stone tablets, but Moses’s birth and retrieval from the Nile, the burning bush, Passover, the Exodus and beyond.

Biographers describe DeMille as an Episcopalian who read the Bible every day. Though my research suggests he probably didn’t have a personal relationship with Jesus, he clearly respected Scripture. My DVD copy includes a message from DeMille explaining the importance of the story to the world. The title card goes so far as to explain, “Those who see this motion picture – produced and directed by Cecil B. DeMille – will make a pilgrimage over the very ground that Moses trod more than 3,000 years ago – in accordance with the ancient texts of Philo, Josephus, Eusebius, The Midrash and the Holy Scriptures.” Sure, DeMille’s name is larger than all the other words onscreen. But can you imagine a movie being made today that actually goes out of its way to credit Josephus?

Like any Hollywood adaptation, there will be differences between the script and Scripture. DeMille plays with the timeline, creates new characters and combines several others. For instance, no matter how many times I read Exodus, I’ve yet to come across Scripture detailing the love triangle of Moses, Pharaoh and Nefertari.

Still, there are details that any Bible-believer will appreciate. I always love that as the Israelites leave Egypt, we see them carrying Joseph’s bones with them and singing. This not only references Exodus 13:19, it fulfills a prophesy first seen in Genesis 50:24-25. God knew even while Joseph was a great leader in Egypt that the Israelites would need deliverance, and He kept His promise. Marvelous!

The value lies in how “The Ten Commandments” drives us back to the Bible, searching out the beautiful Truth and details that inspired the movie.

It’s long – three hours and 40 minutes! – but it’s worth it. The effects hold up better than in most 64-year-old movies. Moses’s staff turning into a snake and of course the parting of the Red Sea remain favorite scenes.

Yes, though I do recall being disturbed as a child that Pharaoh’s firstborn died. That’s one reason it’s so important parents watch alongside their kids. Younger attention spans might wane, but families can watch it in chunks across a few days if necessary.