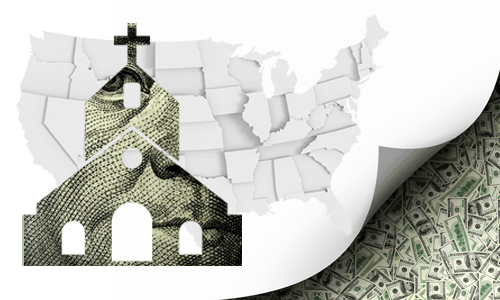 SEATTLE (BP) – As pastor of Epic Life Church in Seattle with only five employees, Keith Carpenter sees the Paycheck Protection Plan loan as a godsend during a devastating economic downturn prompted by the COVID-19 pandemic. So does pastor A.B. Vines, whose multisite New Seasons Church in Spring Valley, Calif., employs about 50.

But some pastors have theological and ethical concerns with the loan, which is administered by the U.S. Small Business Administration.

“The purpose behind the loan is to keep people employed,” Carpenter said April 7, just a day after he applied. “I don’t see a problem with doing it at all. It’s being wise stewards of the resources God provides, and if not anything else, you can pass those resources on in some way to others who might be hurting, in the long run.”

At least two pastors, Bart Barber at First Baptist Church in Farmersville, Texas, and Anthony Hicks of Clifton Baptist Church in Franklinton, La., have discouraged their congregations from applying for the loans offered under the Coronavirus Aid, Relief and Economic Security (CARES) Act, which was passed by Congress last month.

“Generally speaking,” Barber wrote in a blog, “if it takes an act of Congress to make it happen, there’s more going on than just a loan from a bank.”

But others, including Southern Baptist ethicists Russell Moore and Larry Lyon, said they do not see ethical compromises in receiving the loans. The Southern Baptist Ethics & Religious Liberty Commission (ERLC), which Moore leads, joined a bipartisan push to clarify that religious liberties of churches would be protected under the loans administered by the Small Business Administration.

The loans are included in the CARES Act, initially funded at $2 trillion and designed to relieve economic hardship caused by the coronavirus pandemic that has killed thousands and stymied the economy. President Donald Trump said April 7 he’ll work to add more money to the Paycheck Protection Program, which was initially funded at $350 billion.

Businesses – as well as churches and other faith-based nonprofits – with fewer than 500 employees are eligible to receive loans covering up to 2.5 times their average monthly payroll, with a cap of $10 million per loan, to cover expenses like payroll, utilities and rent or mortgage payments.

Carpenter said he intends to maintain his five-person staff at Epic Life Church in Seattle, which according to terms of the program would allow the loan to be forgiven.

“We’re confident we’re keeping all of our employees, and because of that it really seems like a very wise thing to do, that the government has given us this opportunity to kind of have some more money for ministry purposes,” Carpenter said. “There’s no strings attached as far as we can see. At this time, we haven’t had to lay off anyone, but we don’t know what the future’s going to hold. The government I believe is rightly seeing 501c3s [nonprofits] as legitimate businesses in the states, and for them to keep people employed I think is a really good thing.”

Vines, an ERLC trustee, had initial concerns that the loan could have strings attached to it, but he said those have been adequately addressed (See “Religious liberty concerns resolved,” page 1).

“We’ll get the money; if we do fine, we’ll give the money right back,” Vines said. “But I’d rather have a safeguard than no safeguard. If we come out of this thing fine, whatever amount we get, we’ll turn around and give it right back to them.”

But Barber wrote blogposts Monday and Tuesday explaining why he’ll counsel First Baptist Church of Farmersville against taking advantage of the federal stimulus package. In a post Monday, he referenced 17th Century Baptist pioneer John Smythe, who counseled churches to survive on tithes and offerings; and the biblical story in Genesis 14 of Abraham refusing to accept spoils of war from the king of Sodom, so others would know that only God had prospered Abraham. But Barber clarified in a follow-up post Tuesday that he was speaking only for himself, and that he was not attempting to tell others what to do.

The ERLC’s Moore does not see the money as government loans, but as bank loans secured by the government.

“The loans themselves, whether to a church or to a hardware store, are not from the government at all, but, as always, from banks. The government’s role is simply to guarantee to the banks these loans, in case of default. That does not privilege or penalize any religion in any way different from any other entity,” Moore wrote in a column posted last week after Congress passed the CARES Act.

“I realize there are churches that are in different circumstances and they have to make decisions for themselves,” Hicks said. “We personally [Clifton Baptist Church] are not going to take advantage of it, because even though supposedly, things … have been worked out … there [sometimes] are strings there that we don’t know about until later.”

Many Southern Baptist state conventions are working to inform pastors of the new resource and in some cases, assist them in navigating the application.