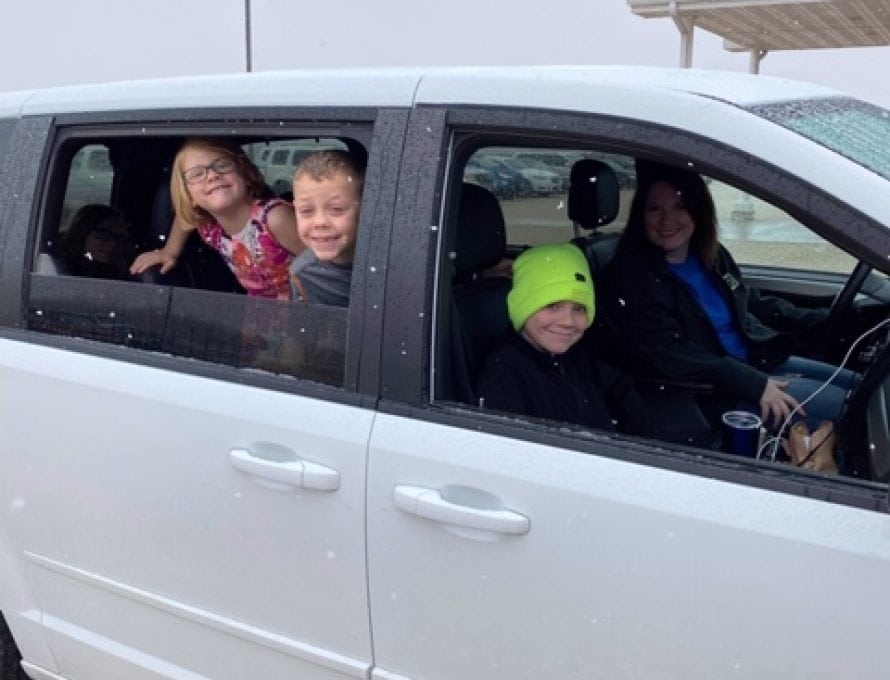 EWING — The COVID-19 recommendation was for churches not to meet in groups larger than ten.  Most churches were canceling worship services on March 22nd or broadcasting worship on the Internet. For many this was a hard thing to do.

Jon Lester, a member of the St. Louis area southern gospel group, The Lesters, proposed to Lewis County area churches that they hold a “drive-in” worship service.  They obtained a low-power FM transmitter to broadcast the service to car radios in the parking lot. The congregation stayed in the car and listened to the service there.

Jon and his wife, Bailey, live in the northeast Missouri town of Lewistown, and Pastor Ted Middleton, of First Baptist Church, Lewistown, accepted the offer.  They teamed up with nearby First Baptist Church, Ewing, which has a big parking lot and a spacious overhang above their entrance.  The Lesters provided the music and Middleton preached.  The Ewing church has called a pastor, but he has not yet moved to the area. 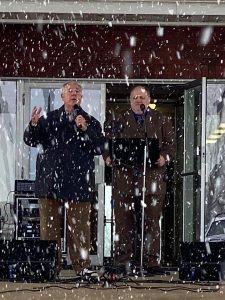 EWING – Brian Lester (left) and Pastor Ted Middleton (right) lead a drive-in worship service at First Baptist Church in the middle of a snowstorm on Sunday, March 22. Due to recommendations for churches and groups not to meet in person it was decided to hold a worship service with the congregation sitting in their cars. A low-power FM radio transmission was arranged. Honks were used as “amens.” Lester leads the southern gospel group The Lester Family and Middleton is the pastor of First Baptist Church, Lewistown. Contributed photo.

“Excitement was in the air,” Middleton said.  He said there seemed to be a sense of relief that they could gather for worship even though not in the church building.  “They were glad to be coming together in the middle of a crisis,” Middleton added.

Some people still had their pajamas on in their cars.  The promotional flyer said, “Honking is as good as an amen.”  The congregation was not allowed to go inside the church building even to use the restroom, so organizers limited the service time to just under 40 minutes.

Middleton said he was “absolutely blown away.”  He added it was the first time he had done a Facebook Live broadcast as well as a radio broadcast.  The Lesters live-streamed on Facebook with 1,200 page views, and Middleton also did, with over 400 views.  They counted 75 cars and estimated 200 people were on site.

Health department restrictions indicated people should be no closer than 6 feet to each other so everyone was told to stay in their vehicles.  Even when the offering was taken at the conclusion of the service it was a matter of lowering a window and dropping an envelope in a bucket at the parking lot exit.

Middleton said the offerings went to the donor’s choice of 8 different churches who were represented that day.  The offerings were delivered to those churches that Sunday afternoon.

The pastor tried to suggest people contribute an offering for the gospel singing group, but the family declined and said it was their gift to the community.

Weather did not exactly cooperate and a snow squall dropped big flakes as the service was conducted. Sound equipment was under the church entrance overhang, but they still covered the sound board with a plastic tarp.

The broadcast was able to be heard up to a half mile away at the local high school.

Middleton preached on II Timothy 1 and Revelation 21, relating Scripture to the anxieties of those who are dealing with the COVID-19 virus.  “We need to trust God even when we don’t understand what is happening,” he said.