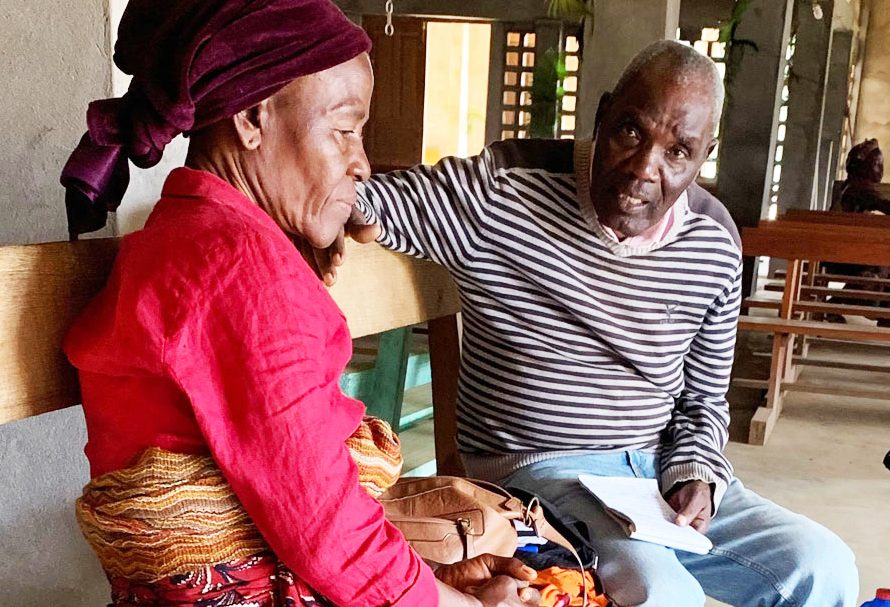 Victor, a former military guard for the president of the Congo, practices sharing a story from the life of King David. He particularly connected to the story of David and Bathsheba. IMB Photo

DEMOCRATIC REPUBLIC OF THE CONGO – IMB missionary Jay Shafto recognizes not knowing what to say and being rejected are two of the main concerns people have when sharing the gospel. Shafto addresses these concerns as he equips believers in the Congo Basin to share the gospel confidently and continually.

Jay and his wife, Kathy, have served in this region for the past four years. The couple’s work is not focused on a specific people group, but a territory. The territory where the majority of their work takes place is about one-third of the country in size and is home to 400 language groups.

Working with existing churches and training leaders in local churches is the central focus of Jay and Kathy’s work right now. Their goal is to train nationals to reach the underreached people groups. The oral-intensive training is specifically designed for pastors and church leaders. Based on the life of King David, the training features nine Bible stories.

Groups of up to 30 men and women attend each four to five-day training, wherever the Shaftos hold the training in the Congo Basin. Each day of the training, participants learn two stories from the life of David and then are encouraged to go out into their community to share those stories with someone else. Additionally, leaders are encouraged to look at their own lives and find ways to apply what they have learned in their positions of leadership.

Jay was surprised to learn the stories from David’s life resonated on a personal level for many of the leaders. One leader, Victor, a former guard to the president, related to the story of David and Bathsheba. “I’ve seen this,” Victor said. “I’ve been places where military leaders have killed men for women.”

Another leader, named Epice, connected with the story of David and Abigail. In the story, Abigail’s husband showed great disrespect to David, and David was angered and set on revenge. However, Abigail asked David to show mercy and by God’s grace, David did. Because David did not seek revenge on his own terms, God took care of David while Abigail’s husband was punished.

As Epice listened to the story of David and Abigail, he became convicted of struggles in his own life. He said, “I have a problem with anger. Can you pray with me to ask God to help me with my anger?”

Throughout the trainings, Jay has seen countless connections spring up between David’s life and national leaders. The stories resonate with the nationals, and they are able to share the stories with a personal emphasis.

“The cultures they’re coming from don’t prepare them to be Christian leaders. God’s Word does,” said Jay.