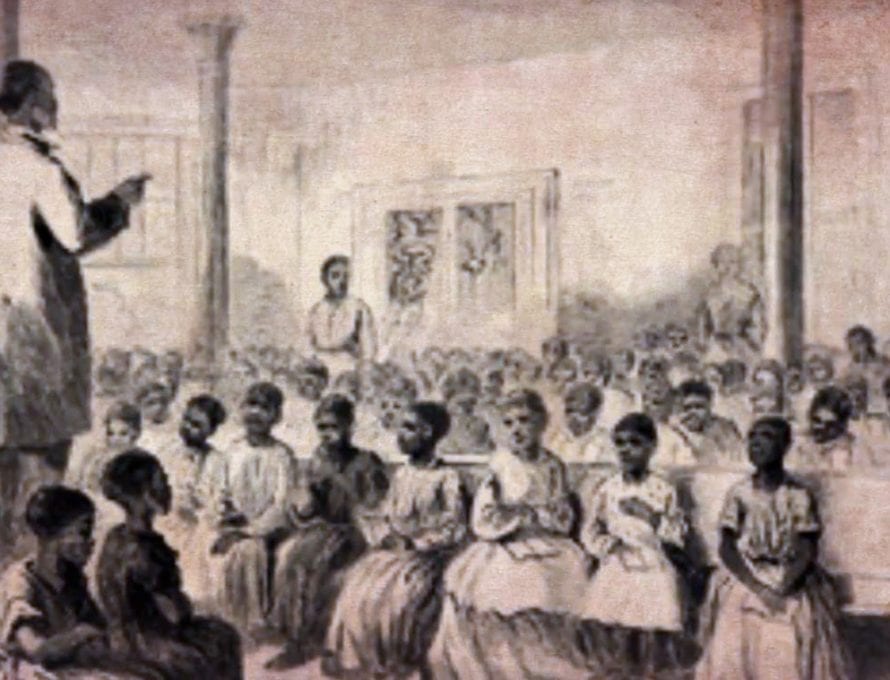 “If I use a basketball term, he was a triple threat, an evangelist, a missionary and church planter. All done under extremely difficult circumstances,” Ausberry has said. “If George Liele had a basketball jersey I think we would all be wearing it. He rightfully stands along with the missionary giants (Adonirum) Judson and (William) Carey.”

The EC voted to approve the first Sunday in February as the annual George Liele Church Planting, Evangelism and Missions Day. The addition names the International Mission Board as a resourcer and supporter of the annual observance, which would begin in 2021.

Ausberry leads the SBC National African American Fellowship of some 4,000 pastors, who in 2019 renamed their annual banquet after Liele, a former enslaved man whose earthly owners recognized his spiritual gifts. NAAF presented awards to Julia Frazier White and Deborah Van Broekhoven as co-authors of the 2013 book “George Liele’s Life and Legacy: An Unsung Hero.”

The 2020 George Liele/NAAF Mission Support Banquet is set for June 8 at 6:30 p.m. in Orlando in advance of the SBC annual meeting.

“In one sense, he was set free that he could set others free from the bondage and penalty of sin,” Ausberry, senior pastor of Antioch Baptist Church in Fairfax Station, Va., told BP. “My hope is that all Southern Baptist churches will share about the life and mission work of George Liele to inspire current and future generations to spread the Gospel around the world. George Liele’s life shows that despite adverse circumstances God can still use us in a mighty way.”

Fred Luter, who served from 2012-14 as the first black president of the SBC, is an active NAAF member as senior pastor of Franklin Avenue Baptist Church in New Orleans.

“On behalf of all the African-Americans who are part of the Southern Baptist Convention I would like to applaud the Executive Committee for approving to add George Liele Church Planting, Evangelism and Missions Day to the SBC calendar,” Luter told Baptist Press Wednesday (Feb. 19). “This recognition will introduce the entire SBC to a great missionary who had a tremendous role of spreading the Gospel to slaves who made a decision to be followers of Jesus Christ. George Liele’s missionary efforts affirmed the saying, ‘Red, yellow, black and white, we are all precious in HIS sight!'”

Robert Anderson, who made the motion at the 2019 SBC Annual Meeting in Birmingham to add the calendar date, also affirmed the EC vote.

“The Bible tells us to give honor to whom honor is due (Romans 12:7), and thus, recognizing the Rev. George Liele is very compelling historically because it corrects the popular notion that Adoniram Judson or William Carey were the first international missionaries from America,” Anderson, senior pastor of Colonial Baptist Church in Randallstown, Md., has said. “Rev. Liele preceded both of them to the foreign field to preach the Gospel, help the hurting, and start new churches. Our history regarding George Liele is HIS-STORY.”

Liele is increasingly recognized among Southern Baptists for his pioneering missions. The SBC formally recognized Liele’s efforts in a resolution at its 2012 annual meeting in New Orleans, celebrating him as the first overseas missionary from the U.S., noting that historiography has not always reflected the contribution of African American Baptists.

The College at Southeastern names one of four homes in its House System for single students for Liele, recognizing him among “great leaders in the Christian Faith.” The first endowed directorship at Southeastern Baptist Theological Seminary’s Lewis A. Drummond Center for Great Commission Studies, filled in April 2018, is named after Liele.

In his paper titled “Who’s on First: Liele or Carey? Assessing the Implications of the Father of Modern Missions,” Duesing advocated for what he calls a “symphonious approach for assessing the modern missions movement.” Duesing, MBTS academic provost and associate professor of historical theology, advocated referencing Liele as the first Baptist missionary and the first American missionary, while also considering Carey the father of modern missions as a movement.

“George Liele was really and truly the first Baptist missionary; there’s no way to get around it. Even before William Carey, or Lott Carey or any of those persons who are so celebrated in Baptist history, there was George Liele,” Driggers has said.. “And George went out on his own. He was not funded by any missionary society or any group whatever.”