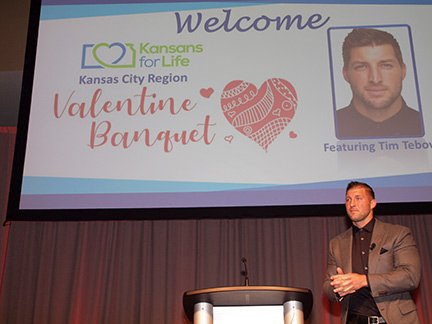 The highlight of the evening for many was the keynote address by Tim Tebow, former quarterback for the Denver Broncos.

“It is such an honor to be here,” Tebow said as he thanked the archbishop, politicians, and Culp for work on behalf of the unborn.

Tebow also thanked Hunt for “having courage in the face of a lot of other people who don’t have it and for your willingness to be up here and support this organization.”

“It really does mean a lot more than winning the Super Bowl,” Tebow said. He added, “One day, when you look back and people are talking about you and they say Oh my gosh what are you going to be known for? Are you going to say Super Bowl, or we saved a lot of babies?”

Speaking about Kansans for Life, Tebow said it’s not a philanthropy.

Later, turning toward Hunt and Chiefs punter, Dustin Colquitt, who was also in attendance, he told them it was “awesome they won the Super Bowl.”

“It’s amazing. What an accomplishment! But you know the best part of that accomplishment is that it gets you an even bigger platform.” That platform, Tebow said, can be used to support causes such as the prolife movement.

And it was obvious the prolife mission is one he is personally invested in and has been all his life.

“You see, my mom 32 years ago had doctors tell her she needed to abort me because if she didn’t, it was going to cost her life. And they didn’t even believe that I was a baby. They thought I was a tumor.”

Tebow now laughingly reports that as the baby of a family of 5 siblings, that some occasionally enjoyed, as only siblings can, referring to him as “Timmy the tumor.”

Getting serious though, Tebow said, “to make a long story short, when I was born, they found out the placenta wasn’t actually attached. So, the doctor looked at my mom after 37 years of being a doctor and said, ‘This is the biggest miracle I’ve ever seen because I’m not sure how he’s alive.’ … I’m so grateful that my mom trusted God with my life and her life.”

In 1986, Tebow’s father, Robert, prayed for God to give him one more child. Showing more of the family’s easy humor he later said, “I prayed for a preacher and got a quarterback.”

Culp, whose idea it was to feature Tebow at the event, said that both parents trusted God implicitly. They named him Timothy and prayed for him by that name prior to birth because Timothy means  “to honor God,” Culp said, “of course, neither parent had any idea about just how powerfully their prayers would be answered:  that the issues surrounding Tim’s birth, coupled with his athletic abilities and deep faith would offer their “preacher” progeny access to a worldwide audience most preachers can only dream of!

Concluding his remarks at the banquet, Tebow said, “What you’re doing here matters. You’re fighting for life. You’re fighting for people that can’t fight for themselves. And my question to you is: Are you willing to stand up in the face of persecution, in the face of adversity, in the face of criticism, when other people are going to say it’s not worth it, when other people won’t stand beside you? Maybe not everybody is going to be with you. Will you stand up for what’s right?”