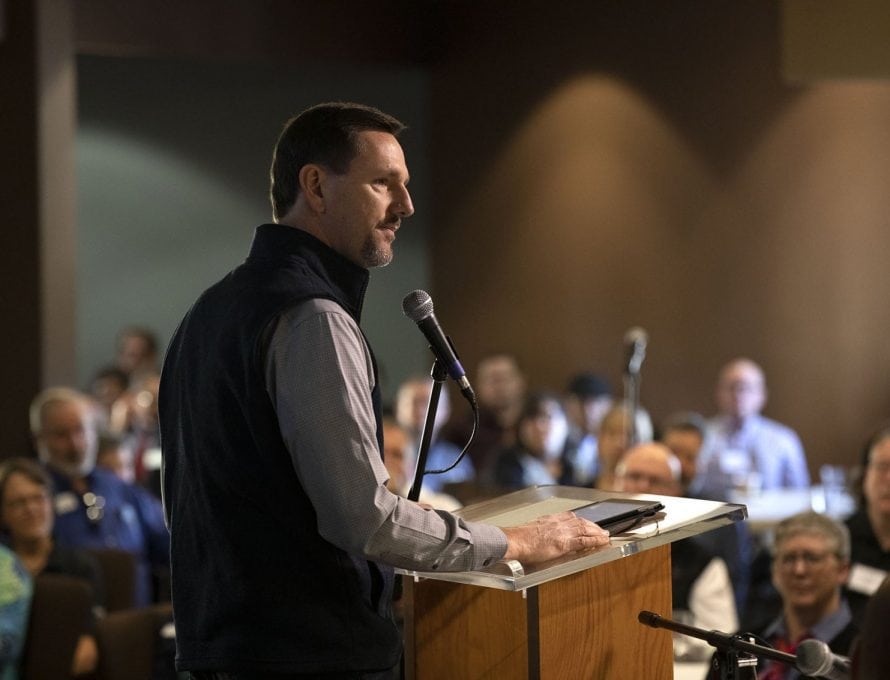 “It is an honor to serve on a spiritually unified and focused board,” Polk said. “The Holy Spirit is working among us…. We are grateful for the leadership of Dr. Paul Chitwood and the staff and missionaries who make up the IMB family.”

To “press toward the fulfillment of the Revelation 7:9 vision,” Chitwood announced five targets built around IMB’s vision and mission to engage unreached people and places over the next five years. The targets are based on the organization’s core convictions, which include proclaiming the Gospel to those who have yet to hear it.

2. Send an additional 500 fully funded missionaries by 2025. This number came to IMB leadership directly as a request from the field, Chitwood said.

3. Mobilize 500 global partner missionaries on IMB teams. While IMB will not fund these missionaries, they will be embedded on IMB teams and an essential part of IMB strategy, Chitwood said.

4. Engage 75 global cities in comprehensive strategies. Demographers project that 80 percent of the world’s population will be in the urban centers by the end of this century, Chitwood said.

5. Increase LMCO receipts 6 percent annually to sustain the 500 additional missionaries, or $10 million per year for the next five years. “While that seems like a lot of money, it will only require that every one of the 16 million Southern Baptists increase their Lottie Offering by $0.63 per year,” Chitwood said. “Dividing by the number of Southern Baptist churches, every church needs to give an additional $200 per year. No matter how you do that math, the point is, it can be done.”

International Mission Board trustees also elected Charles Clark as vice president of mobilization and Price Jett as vice president of finance, logistics and technology. Clark most recently served with the IMB as affinity group leader for the Americas. Clark has more than 15 years’ experience with IMB. Growing up as a missionary kid in the Americas, Clark began his career with IMB as a church planter in 2004 after working more than 30 years in the corporate world in progressive leadership roles. Clark completed his corporate career as vice president of e-Business with Occidental Chemical Corporation and vice president of global solutions with HAHT Commerce. He and his wife, Karen, have three grown children and nine grandchildren.

Jett has served as chief information officer for IMB since July 2019. In this role, Jett has managed all aspects of IMB’s technology portfolio and established a global governance process for technology initiatives, as well as restructured financial arrangements with vendors to eliminate waste. Prior to work at IMB, Jett founded The Care Group, using technology to help families navigate the complex world of elder care. Jett also previously served as the chief information officer and executive director of The Corporate Executive Board (now Gartner) from 2002 to 2016.

In response to a motion made during the 2019 Southern Baptist Convention in Birmingham, Ala., IMB trustees also voted to recommend to the SBC “that the IMB sponsor the addition to the SBC calendar of an annual George Liele Missions and Evangelism Day, to be held on the first Sunday of February of each year,” beginning in 2021. George Liele was a Georgia slave who came to faith in 1773 at age 23, was given his freedom to pursue God’s call on his life, became the first ordained African American Baptist preacher in America and planted the Gospel in Jamaica as the first missionary from America. (Read the remarkable story of Liele’s life and legacy here.)

“As we seek to educate Southern Baptists on our own history, we are grateful for the prospect of being able to promote an annual George Liele Missions and Evangelism Day,” Chitwood said.

Chitwood also announced the celebration of 175 years of Southern Baptist work among the nations. Recognizing that Baptist churches in the South separated from northern churches over the issue of slavery, Chitwood acknowledged that the SBC and the IMB began in sin. Chitwood invited Nate Bishop, an African American trustee from Kentucky, to share his perspective on the issue.

Bishop encouraged trustees when addressing the beginnings of the Southern Baptist Convention and the IMB “to tell the truth, the whole truth and nothing but the truth.”

“Our convention was birthed in sin,” Bishop said. “There is no way to get around it. You can’t put lipstick on a pig. You have to call it what it is. But here is the beauty of being a Southern Baptist: When we repent and confess our sin, we don’t have to be defensive…. We celebrate this 175th anniversary because Christ has freed us (from that sin).

There is a new ethnicity birthed by the blood of Jesus, and that (ethnicity) is the Church,” Bishop continued. “We will tell the truth (about our history), not because we are ashamed, but because we want to glory in Christ. What is impossible with man is possible with God.”

Chitwood also announced the selection of several new staff members, including a renewed emphasis on mobilization, a new general counsel and a newly created prevention and response administrator.

The goal of these positions is to continue to grow the number of candidates for missionary service, Chitwood said.

Chitwood also announced that Richard Salamy has been named as IMB’s General Counsel and Somer Nowak will serve in the newly created role of prevention and response administrator.

Chitwood also shared the results of the annual financial audit. IMB again received an “unmodified opinion,” the highest level of assurance available. Chitwood reported that no property sales were used for operations, reserves were funded at the appropriate levels, and 100 precent of receipts to the Lottie Moon Christmas Offering were spent on the mission field.

“We are thankful for the generosity of Southern Baptists in their faithful giving to the Cooperative Program and Lottie Moon Christmas Offering for international missions. The IMB would not exist without them,” Chitwood said. “We are also thankful for the IMB finance team, both abroad and in Richmond. We have men and women with high integrity, love for our Lord and a desire to see the Gospel proclaimed to the ends of the earth.”

The next IMB board of trustees meeting is scheduled for May 13-14 in Richmond, Va. The next missionary Sending Celebration is scheduled during the June 9-10, 2020, annual meeting of the Southern Baptist Convention in Orlando.