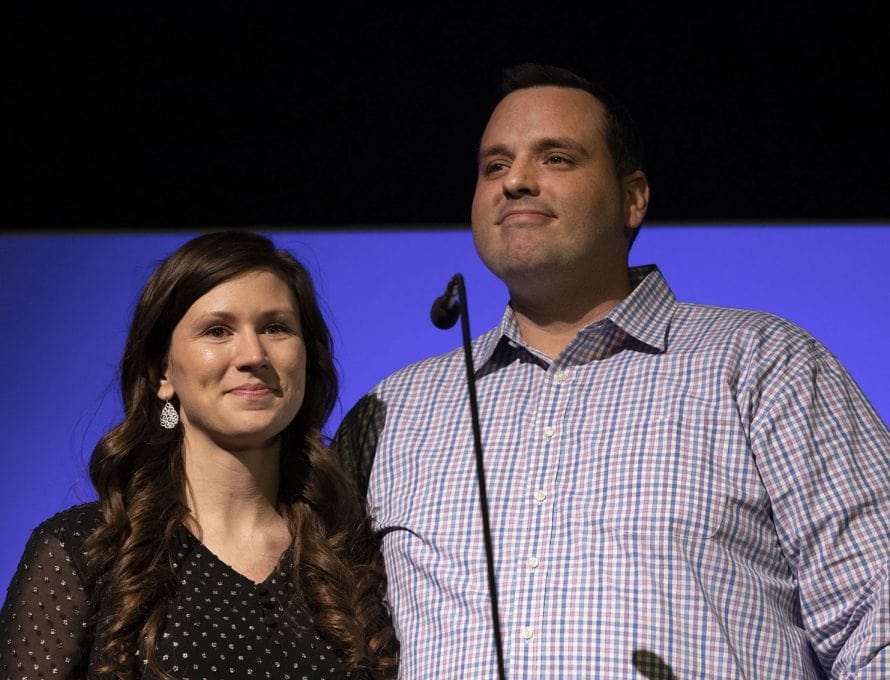 RIVERSIDE, Calif. – Newly appointed IMB missionary couple, Jesse and Danielle, present their testimonies during the IMB’s Jan. 29 Sending Celebration in Riverside, California at Magnolia Church. Jesse and Danielle are sent out from First Baptist Church of Columbus, Texas and will serve amongst the people of Costa Rica. IMB Photo

One Missourian was among the missionaries commissioned. Her identity was withheld for security purposes, since she will serve in North Africa and the Middle East.

The missionaries were voted on and approved by IMB trustees earlier in the week in California. Dr. Jeff Iorg, Gateway Seminary president, delivered the message at the service, spurring the congregants and missionary appointees toward their missional responsibility.

IMB President Dr. Paul Chitwood opened the missionaries’ testimonial time by reminding those gathered of the vital role their churches play in the sending of missionaries.

“How grateful we are for their willingness to go, and the privilege that God gives us to send them from our churches.”

Missionary couple Jesse and Danielle have a heart for lost people in the Americas – a concern rooted in Romans 10:14: “How can they believe in Him unless they have heard about Him: And how can they hear about Him unless someone tells them?”

“Then and now God has used Romans 10:14 to burden our hearts for the unreached,” said Danielle.

The couple sent from First Baptist Church of Columbus, Texas, will share the gospel with those who have not heard in the Americas.

Jeff Iorg read from Ephesians 3 and challenged those in attendance to recognize the all-inclusive missional responsibility the apostle Paul details in this specific passage.

Throughout the closing of his message, Iorg reiterated the inclusivity of the missional responsibility.

“The gospel has power. The only thing the gospel can’t do for itself is carry itself from person to person; we’ve been given that responsibility.”