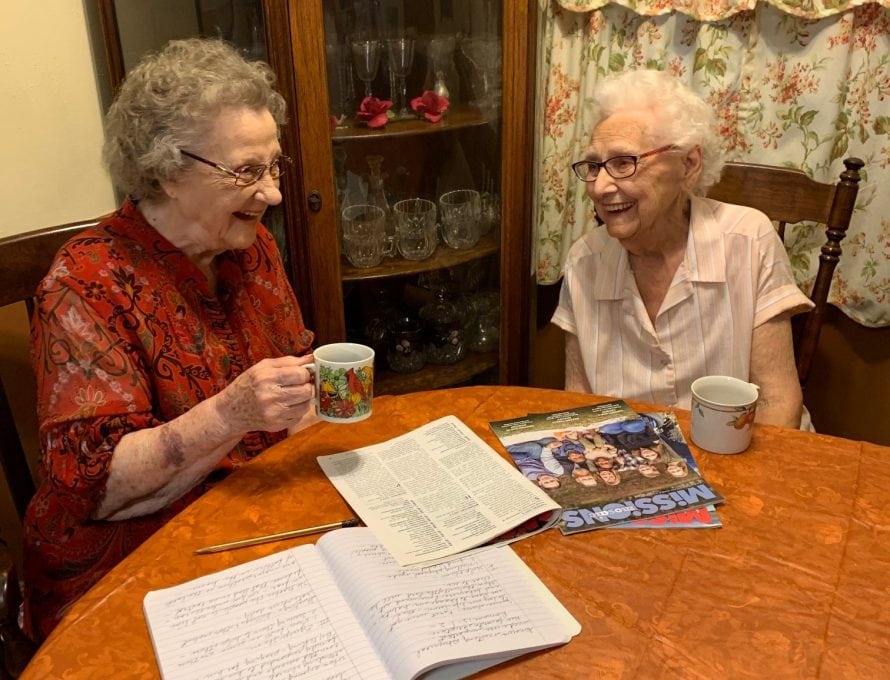 Born in 1925, when the Cooperative Program was created, best friends Anna Mae Barclay and Loene Ensor have cooperated in ministry for decades. Photo by Gayla Sullivan

SPRINGFIELD – At 94, Anna Mae Barclay and Loene Ensor, are reminiscing about the ministries they’ve shared together since beginning their friendship in February of 1966.

Glynn Ensor, Loene’s husband of 62 years, became the seventh pastor of Golden Avenue Baptist Church in Springfield, where Anna Mae was a charter member since the opening of its doors in 1950. The two became well acquainted very quickly.

Anna Mae called Loene at midnight every Saturday night after she got off work, to find out what needed to be included in the bulletin for the following morning. She typed and ran them in her own home on a mimeograph machine. This would continue for 6 ½ years while Ensor was pastor.

Fifty-three years later, these two 94-year-olds have served in many capacities together throughout the years despite the distance of the Ensors serving churches in two other states.

These two influencers have taught Sunday school and VBS, been cooks on a Kickapoo Indian reservation in Kansas and at various youth camps including Falls Creek in Oklahoma for 3 years and at Pulaski County Camp in Buckhorn for 2 years. In the aftermath of Hurricane Katrina in New Orleans they distributed food to thousands of victims for a week. They served alongside each other for 15 years every Wednesday morning folding clothes at Grand Oak Mission. They visited shut-ins for 10 years.

Ensor summed up their friendship well by stating, “We’re always there for each other. We enjoy each other tremendously. It’s been a blessing to me to have a lifetime of friendship with Anna Mae. She does the driving and I do the cooking. She loves my children and I love hers.”

Today and for the past 15 years, as next door neighbors and BFFs, you’ll find them co-directing the Woman’s Missionary Union at the church where they met. On the second Tuesday of every month Barclay leads their group of 10-12 in prayer and Ensor gives the lesson. The group ranges in a 60-year span of ages.

WMU ladies set the church goal at Golden Avenue each year for the Annie Armstrong Easter Offering and the Lottie Moon Christmas Offering. “We always reach our goal, even during a building program which entailed building a new auditorium, five new classrooms, a kitchen, new bathrooms, they never wavered in giving to missions,” Ensor said.

Both born in 1925, the same year the Cooperative Program began, these two have never stopped their ministry of friendship to each other or believing God could use them by serving others.

Anna Mae said, “I’ve learned so much from Loene. I really do appreciate her and how she teaches us about missionaries all over the world. She keeps us organized and always gives a good program. We couldn’t do it without her. And, she’s a great cook!”

Ensor passionately shared, “The reason people don’t want to learn about missions is because if you know about something you’ll have to do something about it. By not knowing about it, you won’t be compelled to give. If people would learn what the CP does, they would understand that it comes down to cooperation—everybody working together to give toward missions. If people know where their money is going to, they’ll give more. It’s the greatest thing that we have going as Southern Baptists.”

Dinah, who married the middle Ensor son, former director of Grand Oak Mission, a food and clothing ministry to Greene County, grew up attending Sunbeams, Girls in Action and Acteens at GABC. She was invited as a guest speaker at WMU to share about how much the church has meant to her, having grown up there. She was invited back recently to share about her diagnosis with cancer and how God is carrying her through that journey.

She thanked the group for their heritage of ministering to others like when they made shorts and shirts for boys in an orphanage near DaNang, Vietnam while her husband Bobby was stationed there during the war.

June Bergeson faithfully attends WMU and “loves studying about missionaries—where they live, their struggles, the difficulty of reaching the lost for Christ, and discovering how to pray for them.”

Alicia Stoneking, the newest and youngest member of the group says, “WMU is important to help show others about missions. In this day and age so many don’t know about our missionaries. This program allows us to learn and share with others.”

Barclay and Ensor portray a strong heritage of what it means to strengthen each other in their friendship, like Ecclesiastes 4:9-10 illustrates:

“Two are better than one, because they have a good return for their labor: If either of them falls down, one can help the other up. But pity anyone who falls and has no one to help them up.”