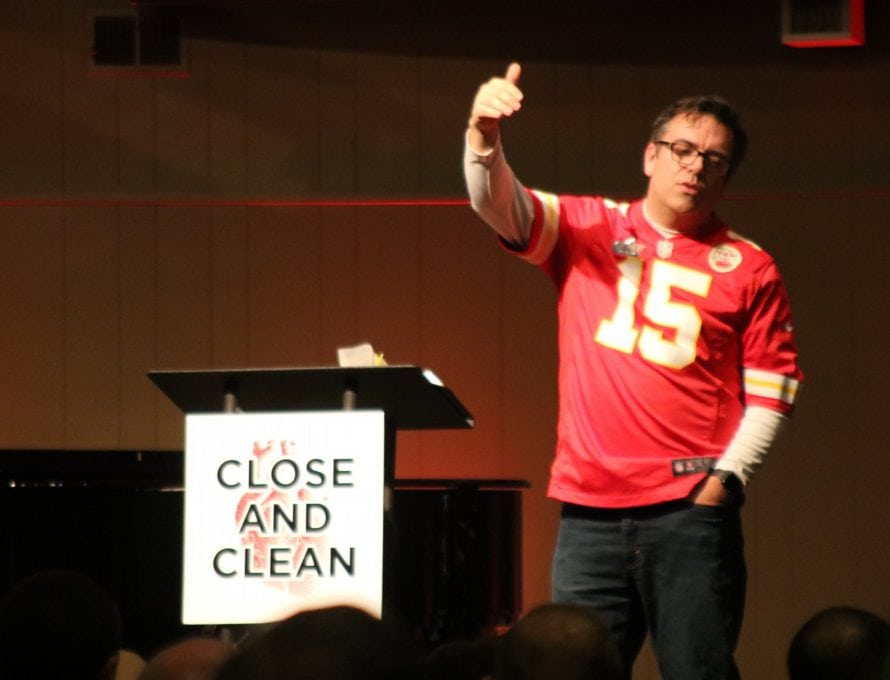 GREENWOOD – It was about as manly a Saturday night as could be in the southern Kansas City community. A couple hundred men gathered and ate nachos. Less than 48 hours before the Chiefs would win the Super Bowl, the majority were sporting red and gold jerseys or hoodies. They were also there to worship and further develop a lifestyle defined by a clean heart and a close walk with Jesus.

Yeats brought messages based on Ephesians 2 and 3. His thesis was straightforward:

Yeats recalled growing up in a Christian home, the son of a pastor. The older he got, he felt there was something – some checklist to spiritual intimacy and growth – he was missing.

“I struggled because I felt as if I wasn’t close to God,” he said. “It set me back into a spin, a tailspin and trying to figure out, which step did I skip. I was pursuing a checklist of things to do but the thing that I missed was the Savior, Himself. Instead of pursuing that checklist, I should have been pursuing the Savior.”

Men, Yeats noted, typically fall into the trap of identifying themselves by their work identity. It’s how men introduce themselves or is one of the first questions they ask of someone. Instead, the defining marks of being a man should be, “Have you followed the Savior?”

“It’s according to His mercy that He chose us,” Yeats said. “It has nothing to do with who you are, where you’ve been, or what you will accomplish. It has everything to do with Him choosing us.”

“We work so hard to try to attain something that God gives for free,” Yeats said. “We cannot try hard enough. We cannot serve enough, do enough, love enough, go on enough mission trips or even pastor enough. We cannot do enough to earn God’s grace. He just gives it. Salvation is by grace alone, appropriated by faith alone, not by any level of work on our own parts. It is God’s gift.”

The gravelly voiced Graves spoke from Acts 9, examining Saul’s conversion on the road to Damascus.

“Saul fell down in the dirt on the road to Damascus and asked, ‘Who are you, Lord?’ “Graves said. “As it turns out, this is the right question, the central and primary question.”

This revelation of the work and person of Jesus Christ made all the difference to Saul – a persecutor of Jesus’ followers and the early church who did a 180-degree turn to spread the Gospel and plant churches.

“Saul knew the Scripture, and yet didn’t know what it was about,” he said. “This one thing is ‘the big thing.’ Everything about his life was still wrong and sinful. The change was in direct proportion to the revelation of Jesus Christ. Our lack of change is an indication of our lack of our understanding who Christ is and what’s been done for us.”