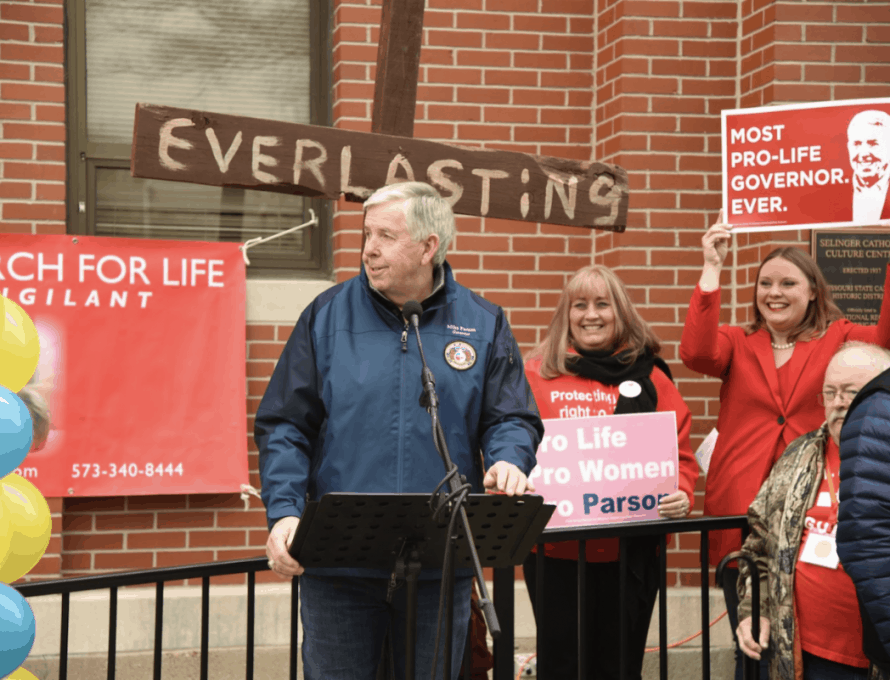 JEFFERSON CITY – Chilly temperatures didn’t dampen spirits of thousands of men, women and children who gathered around and in Missouri’s Capitol Feb. 1 to defend the lives of the unborn and celebrate strides made toward ending abortion.

The 2020 Midwest March for Life featured various speakers, but the biggest name was Governor Mike Parson.

“All life is precious, and that’s why we fight to protect the unborn… to protect those who can’t defend themselves,” he said. “I’m here to tell you, everyone has a right to life.”

Though this was the 10th annual March for Life, this marks the first time a sitting governor has attended the event. It came just a few days after President Donald Trump became the first sitting president to address the national March for Life.

Parson, a member of First Baptist, Bolivar, has been consistently pro-life since entering the office in the June of 2018. He signed Missouri’s “heartbeat bill” last spring, which banned abortion at the detection of a heartbeat at eight weeks, required second custodial parent notification, strengthened consent requirements for out-of-state abortion referrals and – most notably – banned abortion if and when Roe v. Wade is overturned.

“We’re just part of the troops, in Army terms, because we’ve still got to fight battle after battle after battle,” Parson told the pro-life crowd. “But I will guarantee you, sure as I’m standing here in front of you as governor of the state of Missouri, we’re winning the war.”

Bonnie Lee, a member of Open Heart Baptist in Columbia and a member of the Missouri Baptist Convention’s executive board was one of the march’s organizers.

“Our march is to glorify Christ and stand for life,” she said.

“Everywhere we look in the pro-life community, people are looking at Missouri,” Lee said. “We have some very strong, God-fearing legislators and our governor who are standing strong. So while we’re celebrating what God has given us, we need to persevere because the battle is not over.”

This is not the only time supporters of life will meet at in Jefferson City at the Capitol. Missouri Right to Life will host “Show Me Life” Pro-Life Action Day, March 10, at beginning at noon in the Capitol Rotunda. The speaker for that event will be John Ashcroft, former Missouri governor, as well as former U.S. senator, U.S. attorney general.