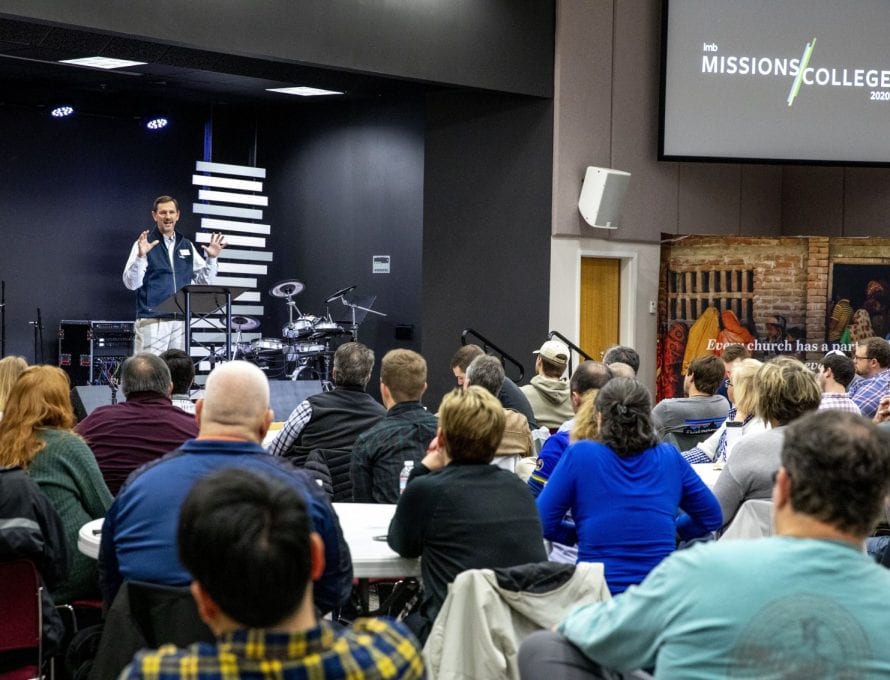 RICHMOND, Va. – First Baptist, O’Fallon has been partnering with churches in southern Mexico for several years now. But as they plan for future trips and opportunities south of the borderd, they have a strategy in mind that goes far beyond simply scheduling the next trip on the church calendar.

That strategic thinking is due in part, First Baptist’s Associate Pastor of Gospel Proclamation Brandon Kiesling said, to the church’s ongoing participation in the International Mission Board’s annual Mission College.

First Baptist was among several Missouri Baptist churches which took part in the intensive four-day missions training event in Richmond, Va., Jan. 7-10. Representatives from First Baptist Churches of Ozark and Mt. Vernon, as well as Crossway, Springfield, and Freshwater, Jefferson City, joined with First Baptist, O’Fallon, to learn, network and strategize to become better partners in reaching the nations with the good news of Jesus Christ.

“Mission College is designed to be a training intensive for churches already involved in global partnerships through the IMB as well as an entry-level track for churches exploring where and how God is calling them to fulfill the Great Commission,” said Rick Hedger, the Multiplying Churches director for the Missouri Baptist Convention, also an IMB trustee and Mission College speaker.

Kiesling – who chose the Strategy Plan Coaching track – said he gained new insight in how to build and maintain a long-term commitment with an IMB missionary on the field.

“Part of the track was creating a timeline from where we’ve started to all the way to where we’re hoping to finish; looking at the entire process from a 30,000-foot view,” he said.  “The point of that is to have a clear strategy in place from beginning to end, because we’re trying to work toward the end goal, which is to plant a church that reproduces.”

Kiesling said Mission College challenged him to think beyond the church’s current partnership and missions plans.

“Our missionary has been incredible and he keeps the strategy in mind, but I just never really thought it through. Doing that on my end was super helpful.”

Kiesling said his church has four trips to Mexico planned in 2020, and the lessons from the Mission College will help keep the partnership on track for the sake of the gospel.

“The entire experience was one that was totally worth it,” he said. “The exposure to the different regions in the world of what God’s doing as well as just getting to know the people that are working is helpful for pastors and lay people. It gives you a bigger worldview of the overarching mission of what we’re called to do: to get the gospel out to the ends of the earth.”