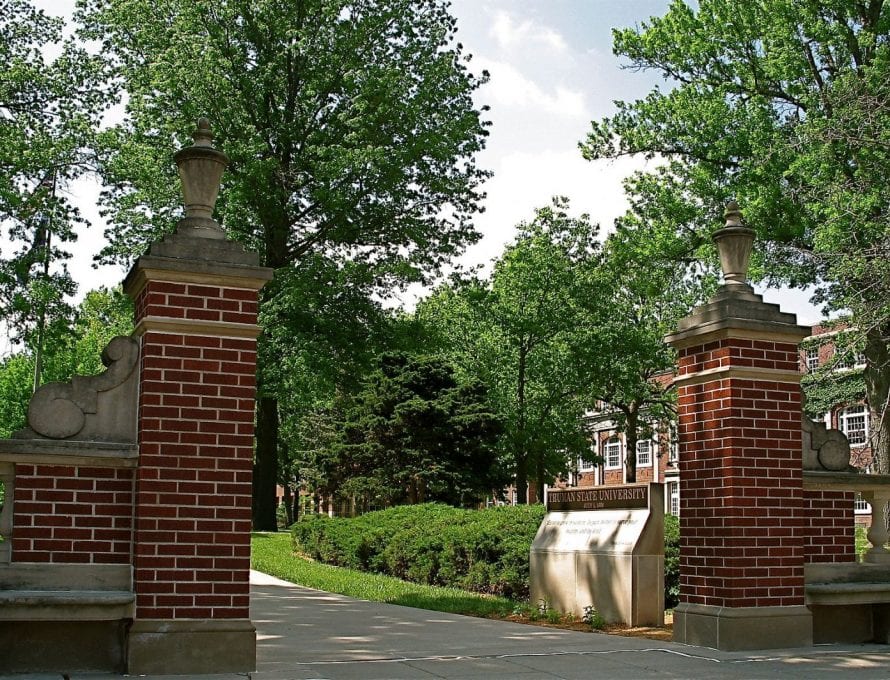 KIRKSVILLE – The Truman State University’s Baptist Student Union (BSU) celebrated the baptism of a new sister in Christ at Hamilton Street Baptist Church, Jan. 5, where campus missionary Greg Xander and some of his students attend.

Ashley’s journey to Christ began two years ago during her freshman year. Shortly after winter break, she came to the BSU’s Thursday night worship gathering. After she’d been coming for a few weeks, Xander asked if she went to church. She said she considered the BSU her church. He replied, “We love our churches. We’re missionaries here, but we don’t want you to see the BSU as your only source of spiritual fulfillment.”

Ashley started attending Hamilton Street with Xander and his family. They continued building a relationship with her and connected her to other students. At first, she knew very little about the Bible, but wanted to know more. Conversation after conversation, they dialogued about her questions.

One day, Ashley talked with Xander and his wife, Stacey, in their backyard while their kids jumped on the trampoline. “The conversation took a move,” Xander says. She asked what it means to give your life to Jesus. They explained. She said she’d never done that, but she wanted to. Right there in the grass, they prayed with Ashley to surrender to Christ.

Ever since then, Ashley’s been “a little missionary,” says Xander. “It’s a striking comparison between her and those who say they give their life to Christ and get baptized right away, but there’s no difference, no fruit.” She delayed her baptism because she wanted to help her mom – who was skeptical of church based on her past experiences – understand her decision. By the time she got baptized, her mom was ready to celebrate with her, traveling from St. Louis to Kirksville to witness it in person. Afterward, when they all went out for Mexican to celebrate, Xander got to talk to her mom about what baptism means.

Ashley’s missionary influence hasn’t stopped with her family. Through her involvement with the international club at Truman State, she’s made friends with many international students, most of whom don’t know Christ. “She’s just talking about it as it comes up in conversations,” Xander says. She’s also introduced those friends to her BSU community. One of her Hindu friends once asked her how she could read and know more after attending a Thursday night worship with her. Ashley helped her find the Bible app on her phone. “This is so exciting. I feel like God is trying to use me,” Ashley told Xander.

Several of her not-yet-believing friends attended her baptism. One of them, who claimed to be agnostic, had a lengthy conversation with Xander later that day about church, Christianity, and who Jesus is. At the end of their talk, this student told Xander one of his goals for the semester was to go to church more. Xander told him, “You could go to church every day this semester. You could learn all the stuff. You could even get baptized. But if you don’t actually give your life to Jesus, it’s just like wearing a wedding ring but not being married.” Xander hopes that food for thought will fuel continued conversations about Christ this semester.

“Don’t just count the conversions; count the conversations,” Xander exhorts. Ashley had her own blanket at the Xander’s house long before she accepted Christ. “We’re happy to be faithful. The results aren’t up to us.”

In 1612, eight years before the Pilgrims set sail for the New World to find a home where they could worship together in freedom, English Baptist pastor Thomas Helwys procl