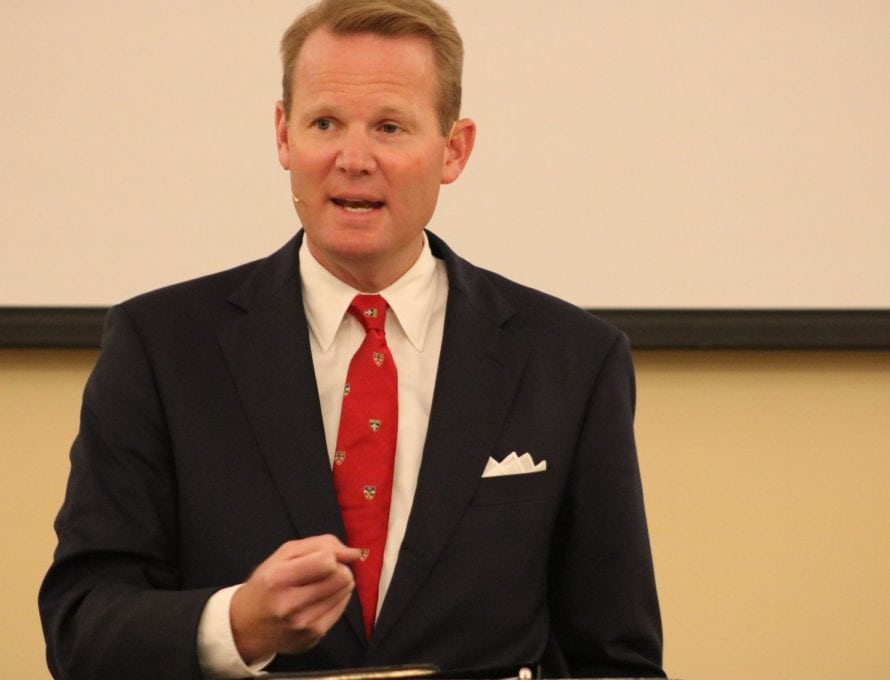 EDITOR’S NOTE: This is the second of a two-part interview with Midwestern Baptist Theological Seminary President Jason Allen. The interview occurred Dec. 9 at The Pathway offices and was conducted by Pathway Editor Don Hinkle. The first part can be found here.

Don Hinkle: The presidents of all the SBC seminaries meet on a regular basis. What is your take on where theological education is, in general, collectively, throughout the SBC?

Jason Allen: Let me speak within the SBC and beyond the SBC. Within the SBC we have six seminaries. When you compare us to broader Protestantism or even broader Evangelicalism, we all are very large. So depending upon the year, all six Southern Baptist seminaries fall within the top 10 or 12 or so seminaries in North America. So we all are large. By those measures we all are strong. I think we’re large and strong for two primary reasons. Number one, because we all are conservative. Number two because we all are supported by the Cooperative Program. Those are the two key aspects of our institutional strength. Thirdly, and touching on those two, is we’re Southern Baptist institutions, which means we’re connected to and supported by a very large denomination.

More broadly in the world of theological education, let me parse those two words for a moment. Theologically speaking, I think we’re in a season of real re-definition. I think evangelicalism is being re-defined and I think for us, as Southern Baptist seminaries, we have to continue to state and re-state and re-state again what we believe in and why. To that end, I just started a major series in chapel. I began it with winter commencement last Friday, entitled “Truths Worth Contending For.” I’ll be preaching 10 different doctrinal sermons between commencements and convocations and other signature chapel moments where I’m preaching on things like biblical inerrancy, which was my first sermon. I will also be preaching on the sufficiency of Scripture, the exclusivity of the gospel of Christ, the penal substitutionary atonement, a biblical pro-life ethic, a biblical view of sexuality, biblical marriage and biblical complementarianism.

As I said in commencement last week, what one generation neglects, the next generation often rejects. And so even with the doctrine of inerrancy, we cannot assume anything. It’s not sufficient just to speak in vague generalities about how “we appreciate the Bible” or how we believe the Bible or that we have a high view of Scripture. The problem is that no one acknowledges having a low view of Scripture.

Even liberal denominations speak of having a high view of Scripture. The word inerrancy is a stumbling block word and it has always been a stumbling block word. That is because it’s the word that’s most difficult to squeeze around the margins. It is defined very specifically and thus it is an important word. It is an essential word that we should be using again and again.

Now, more broadly about education, I said I was going to parse the theological and the educational. Higher education in North America is in a real challenge. The demographic transition that’s taking place with fewer high school graduates in most regions of the country every year than the year before, the financial challenges still in the aftermath of the great recession, two constrictions in funding from state legislatures and escalating costs of higher education are having an impact.

JA: Well it does. And that topic is so multi-faceted. Everything from gender identity to gender confusion to marriage to same-sex marriage to same-sex attraction to what we used to refer to as fornication and premarital sex. The list kind goes on and on. And what’s happened is – as those different practices and experiences have become culturally normalized and sanctioned and then celebrated – the squeeze then gets placed on people like the two of us and institutions we serve and the denomination we serve for holding to biblical norms. You and I were in the governor’s office here earlier today, visiting with them for a little while and we talked about these very issues with him. I raised those because they are on my mind every day.

The intersection of sexual liberty with religious liberty is where the friction point is. Religious liberty so often is being redefined as a freedom to worship. Well, we want to be free to worship for an hour or two on Sunday, but we want to be free to practice our religion seven days a week. So all this is coming together in ways that makes it very difficult. We have to be clear. We have to be biblically sound. We need to be legally wise, but biblically faithful most of all, speaking with clarity, with grace, but with absolute unambiguity when it comes to these great moral issues that the Bible speaks to.

DH: What prompted you to write your book, Letters To My Students, and what’s the next book that’ll be coming from Jason Allen?

JA: Yes. Over your shoulder is a book that I edited and contributed to a few years ago called The SBC in the 21st Century. I led that effort and had contributions from other denominational leaders. In that book, one of the chapters I contributed, I argued that we as Southern Baptists are in a golden era of theological education based upon the size of the seminaries and the scholarly output of those seminaries. For instance, just a couple weeks ago, we were at the Evangelical Theological Society meeting in San Diego, Calif. Midwestern Seminary had 41 presentations made by faculty and doctoral students – more than any other seminary. In 2011 Midwestern had three. Right there with us was Southern Seminary, Southwestern Seminary, Southeastern Seminary and New Orleans and Golden Gate seminaries. All the Southern Baptist seminaries were very well represented. We show up kind of like behemoths at the ETS gatherings as far as the size of our turnout and in the number of our academic presentations.

DH: That hasn’t always been the case, has it?

JA: No, we were outsiders at ETS a generation ago, but we’re there now. We can’t be ignored. This is one of those things that doesn’t make headlines. It’s not the thing I’m most proud of, but for Midwestern to grow in stature to where we are a leading player at ETS, given the caliber of our faculty and our doctoral students, it says a whole lot about the quality of the institution that I get to serve.