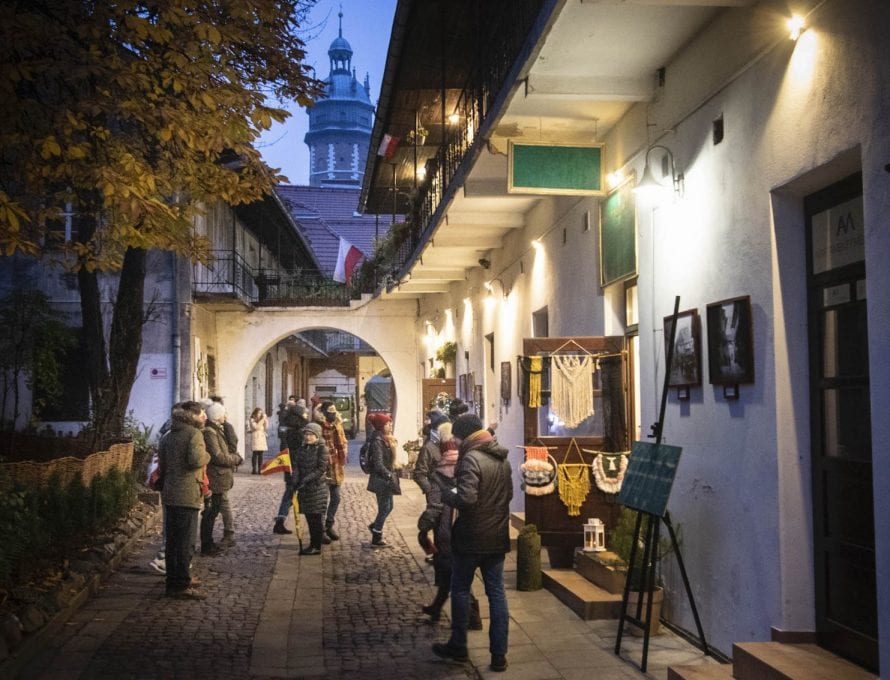 KRAKOW, Poland – Tourists gather in an alleyway in historic Kazimierz, traditionally the Jewish district of Kraków, Poland. This alley was shown in the 1993 movie Schindler’s List, the story of a German factory owner who worked to save Jews during World War II. IMB photo

KRAKOW, Poland (IMB) – The twisting of my gut was expected, but it was much deeper than I had imagined. Standing in the place where Nazi Germans murdered more than a million Jews and thousands of other people deemed undesirable, I could not escape the feeling. This wave of emotion flooded over me as I walked through the Auschwitz-Birkenau State Museum, near Kraków, Poland, the city my wife and I have moved to in order to serve with the IMB.

Bartosz Duszynski, a spokesman for the Galicia Jewish Museum in Kraków, Poland, explained that the reason for such a big celebration this year “is the fact that it may be one of the last occasions to gather such a big group of former prisoners of Auschwitz-Birkenau. Not many of them are still alive and I think this is one of the last moments to listen to their historical witness.” For Poles, Jews and others living in southern Poland, this history is still a part of their daily life.

Even after reading stacks of books about World War II as a homeschooled kid in the U.S., the words “genocide” and “depopulated” became real almost 30 years later when I moved to Europe. Standing in the Galicia Jewish Museum — a museum in Kraków remembering the Jewish population of southern Poland — a photograph burned itself into my mind. It was a recent aerial photo of a street I had walked dozens of times on the way to Polish language class. But the aerial view showed a derelict Jewish home adjacent to this historic street — which is usually crowded with tourists, students and locals.

I can easily remember the home’s abandoned prayer chapel, unused since its former owner — a wealthy merchant — had fallen victim to the Holocaust more than 75 years before. The Holocaust ended centuries of Poland’s welcome to Jews. Historically, Jews in Poland grew to be the largest Jewish population in the world. After the Holocaust, Jews fled en masse to the U.S. or, after 1948, the newly formed state of Israel.

Fellow IMB workers Ben and Christy Prater* minister among the Jews and have worked in Kraków and Auschwitz on several occasions. My wife and I work to connect them with Polish believers who share the vision of learning the Hebrew language and reaching Jews in Poland.

“One of the things we found in doing some research,” says Ben, “is that 250,000 Jewish believers died in the Holocaust.”

Christy continues, “The outcome of that is we would have who knows how many Jewish believers alive today if that had not happened. The Holocaust almost wiped out the believing Jewish community.” As an adult, Christy discovered how her family had hidden their Jewish ancestry after World War II and she had two great-uncles who died in Auschwitz.

Today, the combined number of evangelicals in Poland is less than one percent of the population, making Poles an Unreached People Group. The number of Jews living in Poland continues to be extremely small, but now, 75 years after the war, the Jewish population has begun growing, once again. However, both in Poland and around the world, very few Jews have a personal relationship with their Messiah, Jesus Christ.

In the future, the Praters plan to spend time in Kraków building relationships not only among the Jewish population here, but also among the large numbers of Jews visiting Poland to better understand their history.

“I’ve had so many experiences in Auschwitz and on the streets [of Kraków] with Jewish people,” says Christy, “and the Lord impressed on me, and on Ben as well, that Jews need to be reached there, so that they have some good news that they might share, or at least dwell on.

“One Russian-Jewish lady I met in Auschwitz — I just put my arms around her — I didn’t understand a word she was saying but I said, ‘Jesus loves you. … Yeshua loves you.’ She just held on to me and cried. She had a number,” Christy says, referring to the tattooed numbers Nazis gave prisoners at the Auschwitz-Birkenau camp. This woman had survived, while thousands of others did not.

The Praters explain that to build a relationship with Jews often takes years of careful effort. Both the Praters and Polish ministry partners in Kraków have cautioned me that even 75 years later, Jews may struggle to trust people due to the trauma of the Holocaust. But the Praters hope to invest large amounts of time with people as they minister in Kraków, Poland. Because Ben and Christy speak Hebrew and have lived in Jewish communities, they know the struggle and the rewards of working among the Jewish people.

Today Baptist churches could look to the Jewish people as an example of how to remember. Jews in Israel and the museums here in Poland are planning ceremonies and prayer events to remember the day. Jews also are deeply grateful to those who helped them during the Holocaust.

“It’s solemn, but it’s a celebration, like a solemn assembly,” says Christy about how the Jews she knows are marking the anniversary.

“They remember because the Bible says