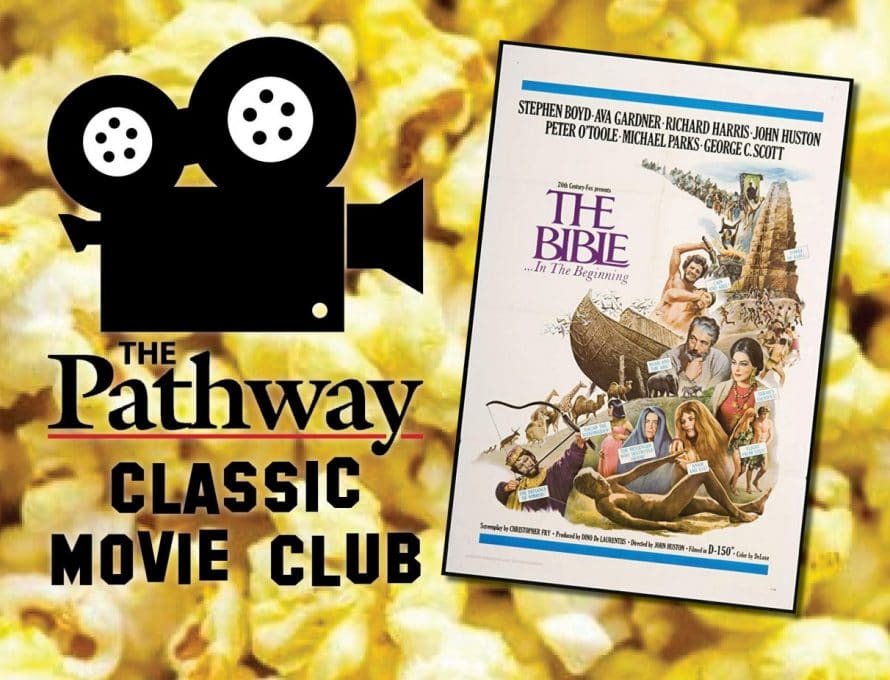 EDITOR’S NOTE: Once a month in 2020, The Pathway will examine a classic Hollywood retelling of a biblical story, compare it to the actual Word of God, and discuss its artistic merits.

Hollywood has a love-hate relationship with The Bible. On one hand, its principles, the worldview it teaches and the Savior it points to are generally antithetical to many of Hollywood’s own values. On the other hand, the Bible offers a built-in audience and – crucially – royalty-free stories. While far from devotional material, the stretch of biblical epics from the 1950s and 60s can offer an interesting take on Christians’ sacred history. Viewed critically, they can prompt discussion and appreciation for God’s truly magnificent story.

There can be no better place to begin than “… in the beginning,” so grab some popcorn and settle in for the first movie in our classic movie marathon: 1966’s “The Bible… In the Beginning.”

“In the Beginning” ironically came to us toward the end of Hollywood’s biblical epic era. By its release, the genre that exploded with blockbusters like “The Ten Commandments” a decade prior had waned. As its title suggests, “In the Beginning” was originally intended to be the first in a series of films that told the entire story of the Bible… a biblical cinematic universe to borrow a phrase from modern superhero movies. This first – and only – installment covers the first 22 chapters of Genesis.

It was directed by John Huston, one of the more capable and reliable storytellers in Hollywood at the time (you might have seen his work directing “The Maltese Falcon” and “The Treasure of the Sierra Madre”). He also stars as Noah, alongside other faces you may have seen: Richard Harris (Cain), George C. Scott (Abraham), Ava Gardner (Sarah) and Peter O’Toole (an angel).

Huston attempts to give life to eight biblical accounts: Creation, Cain and Abel, Noah and the Flood, the Tower of Babel, Abraham and Lot, Sara and Hagar, Sodom and Gomorrah, and Abraham and Isaac. It’s mostly accurate and faithful to the text. Of course, relying on Scripture for your narration will seldom lead you astray. Huston uses some occasional artistic license and adds invented dialog where none exists in the text. For example, we see some doubt on the part of Noah’s wife, and Abram and Sarah speak lovingly to each other with conversation cribbed straight from the Song of Solomon. It’s… well, it’s an interesting choice is what it is.

It depends. “The Bible… In the Beginning” is a pretty long movie, clocking in 10 minutes shy of three hours. It’s worth your time and it’s refreshing to see relatively straightforward biblical retelling, but I can see those with short attention spans getting quite bored. This is especially true during the first few vignettes. Things pick up with Noah’s scenes, however. This is in part because Huston gives a humorous, affecting performance and in part because the production went to such great lengths to show us lions, tigers and bears (oh my)! The scenes with Abraham also stand out; George C. Scott is an actor who demands to be watched regardless of the role. As should be the case with any movie touching on biblical accounts (or any movie period, regardless of the subject) there are plenty of topics for families to discuss.

There are much better movies based on biblical accounts. By covering too much in one sitting, Huston bit off more than he could chew and the storytelling aspects suffer. Future movies in The Pathway’s Classic Movie Club will focus on a single biblical story, and let that story breathe and take life. Its lukewarm critical reception was the nail in the coffin for the biblical epic genre. For “The Bible… In the Beginning,” it’s very true that the book is better than the movie.

There are only so many ways to creatively hide the nudity inherent in the Creation account, and “In the Beginning…” gives up the pretense after a few minutes and briefly shows Adam’s backside.

In the next installment, in honor of Valentine’s Day, we’ll discuss a love story: 1960’s “Esther and the King.”