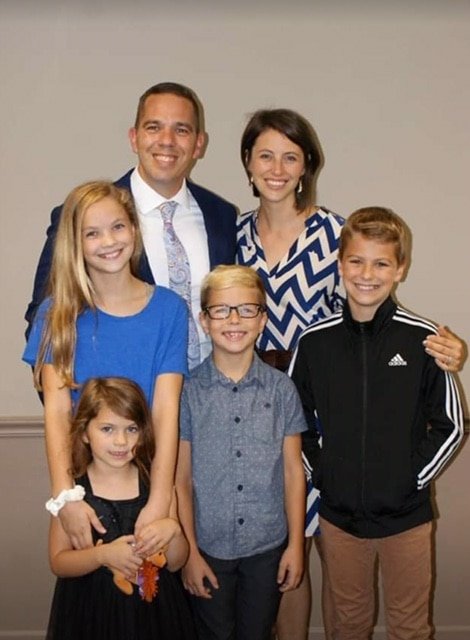 FERGUSON – After serving four years as pastor of First Baptist Church in Ferguson, Pastor Joe Costephens is entering the U.S. Navy as a chaplain. He will be entering as a lieutenant, and after training he will be attached to a Marine unit.

Pastor Costephens initially prayed about military chaplaincy as he was finishing his education, but he and Sarah just didn’t feel like the time was right. But recently a friend had to stop by the military recruiting office to pick up some supplies for a presentation and as a joke, gave Costephens’ name to the recruiter. He told the pastor “enjoy the free lunch.” But that began the process that led the Costephens family to make a transition in their ministry to military chaplaincy.

He will report for training in California at the end of January. As a 39-year-old recruit with a professional degree he will do a modified basic training which is not as rigorous as it would be for a young 18-year-old non-commissioned recruit. Officer Development School training will begin, and then he will be sent as a Navy chaplain to minister to a Marine unit as they train, deploy and serve the country.

Costephens said he is looking forward to the service. “Military chaplaincy is a ministry of presence.” He said he will be doing counseling, training alongside the Marines, deploying with them and making disciples. “In a church, as they gather in short segments of time in the rhythm of church services, you are making disciples, but maybe not on a daily basis.”

He said, “When you go on a mission trip with your church people, there is a daily interaction and disciple making experience for that time. In the military, you are with them daily on their mission and it is much more intense.”

“Those guys take an oath of office to lay down their life if needed.” The military lifestyle is stripped down, and culture and personality take a back seat to the mission. “They are more open to the gospel,” he added.

Ministry at First Baptist, Ferguson since the 2015 merger has been a process of assimilating two churches into one. There were a lot of young families in the Florissant church plant and a lot of empty nesters in the First Baptist Church. They complemented each other with differing skillsets and life experiences.

The community of Ferguson experienced great turmoil in the summer of 2014 after an incident in which a young African-American man named Michael Brown was fatally shot by a police officer after an altercation. The aftermath of the incident included protests and rioting in the community, and the Missouri State Highway Patrol was called in to restore order.

Asked if the church had been able to work to restore healing in the community, the pastor said, “Healing is an interesting term.” He likened it instead to restoring the status quo. He said, “We try to convey a sense of neighborliness. There is friendliness in the community, but still areas where there are concerns.

“We have been trying to preach the gospel by opening the doors. We’ve been being a light in a dark place. St. Louis is not very receptive to the gospel. There is a spiritual warfare going on and the depth of darkness is tough to penetrate,” Costephens added.

“We are grateful for the amazing people of First Baptist, Ferguson. They are amazing people. I feel my time in North County has been used to prepare the church for their next steps. To push forward,” he said.

Costephens, his wife and four children will continue to serve the Lord, but in a different arena in the future.