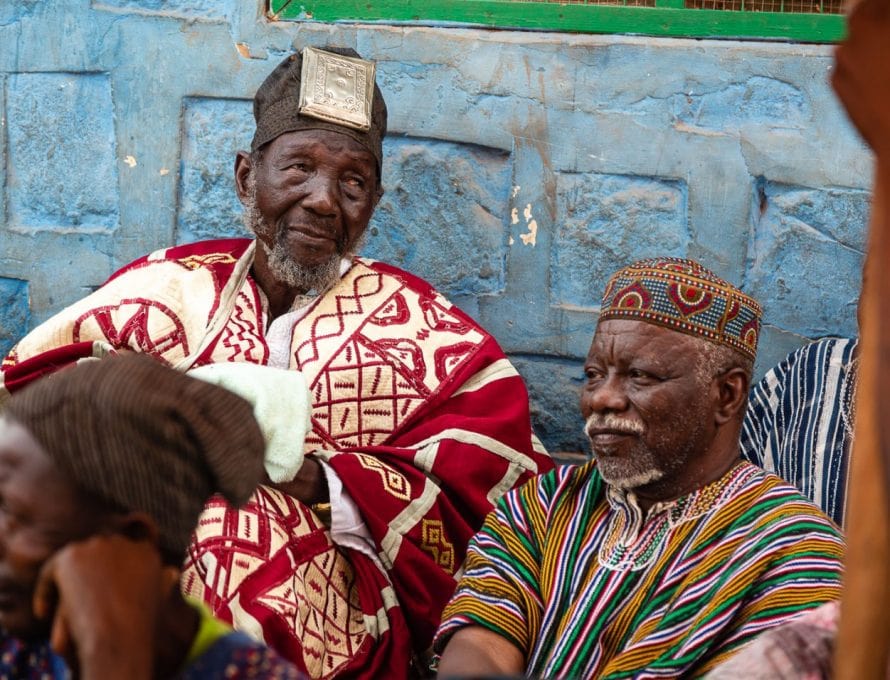 NORTHERN GHANA – Naa Bɔhagu, the paramount chief and overlord of the traditional kingdom of Mamprugu in northern Ghana, sits outside his palace with the Taraana at his side. This Taraana is the first Christian to hold that position. (IMB Photo by William Haun)

NORTHERN GHANA – The tension can be felt across the crowd of hundreds outside the palace in Nalerigu, Ghana. They wait in silent anticipation for the Taraana, one of the Mamprusi king’s seven elders, to come out of the hall to present the man the king has selected as chief. When he does, the new chief’s supporters erupt into cheers and applause. The Taraana ceremoniously places a white smock on the chief followed by a bright red cap. Thus begins several days of celebration and ritual as the new chief is “enskinned.”

The Taraana—which translates literally to “peer” or “equal”—is in many senses the king’s right-hand man. However, over the next few days, this Taraana will not be involved in the ritual sacrifices to the ancestral spirits or in the formal Islamic prayers for the new chief. This Taraana is the first in the traditional kingdom of Mamprugu’s 700-year history to be a follower of Jesus Christ.

Like many West African nations, even though a democratic government runs the nation, there are traditional, tribal chieftaincy structures that are still the authority at the local and, occasionally, even regional level. These local leadership positions are almost always intricately connected to African traditional religious belief systems.

In northern Ghana, chiefs sit on skins (hence the term enskinned instead of enthroned) and those skins are often taken from the animals that were sacrificed to ancestral spirits in a prayerful plea to win the chieftaincy contest. Once in power, a chief will wear magical amulets to empower his rule and protect him from his enemies. He will regularly employ soothsayers and make blood sacrifices to ancestral shrines for guidance.

So the question arises, can a Christian become a chief? Fifty years ago, this was unheard of in northern Ghana.

Salifu was the son of Naa Sheriga, king of Mamprugu in the 1950s, and was led to Christ by a missionary when he was in his youth. He began attending church, and his brothers complained to the king that he was lazy because he refused to go to farm on Sundays. The king berated him and told him to renounce his newfound faith, but he refused.

Mr. Yiddi tells a similar story of the persecution he faced after following Jesus in his youth in the 1960s. His father and brothers beat him for attending church. He finally fled his home, walking 35 miles on foot to a town where a Christian family took him in.

Today, both of these men are chiefs. Salifu is now called Jagbandaana, the chief of the village of Jagbaani, and he is the direct brother of the current king. Jagbandaana is a well-respected leader in the region and an active member of his local evangelical church. Yiddi holds the title Nasiiraana and is regularly sent throughout the region as an ambassador of the king.

The two credit the positive witness of missionaries and other Christians as instrumental in changing their community’s opinion of their conversions. Nasiiraana said, “People didn’t know what a Christian was. But when they see that you are good, kind, compassionate — like Jesus — they want you to be their leader. They see we have become peacemakers.”

Pioneering men like Jagbaandaana and Nasiiraana have led the way for a new generation of Christian chiefs in Mamprugu and all across northern Ghana. Chief Sɔambangba of Namangu, Ghana, was already a chief when the pastor of his local Baptist church came to him, shared the gospel of Jesus and called him to repentance. “I grew up knowing Chief Jagbandaana was a Christian, so I knew I could also follow Jesus as chief,” he explained.

Recently, Baptist lay leader Fataw was selected by his community’s chief to be the Na’akyinaaba or “chief of the young men.” Pastor Fataw continues to preach in his church, work at the Baptist Medical Centre in Nalerigu, and lead the youth as a traditional chief.

However, balancing traditional chieftaincy with being a disciple of Christ is difficult, fraught with spiritual pitfalls. In 2004, when John Wuni, who became the first Taraana, was asked to contest for the position in the king’s court, he was a deacon and founding member of the First Baptist Church in town. He sought counsel from the pastors in his area. After much deliberation, they agreed that it would be good to have a Christian leader in such a high position and promised to keep him accountable. Before his enskinment, he made sure the king would be willing to allow him to shirk the responsibilities of his title that involved traditional religion or Islamic ritual, and the king agreed.

There are now so many Christian chiefs in Ghana’s north that in 2010 they formed their own fellowship society — Northern Ghana’s Christian Chiefs Association. Among their aims are the desire to “promote and integrate Christian principles and ethics in the Chieftaincy institution” and to “discourage [harmful] socio-cultural practices and traditions in [their] communities.”

Praise God for the men and women who witnessed to and discipled these Christian leaders.  Pray for Christian chiefs in African contexts as they are regularly facing the temptation to compromise their faith. Pray that they will remain men of integrity and above reproach who will be models for the next generation of Christian leaders in Sub-Saharan Africa.

William Haun, who wrote this article, lives in northern Ghana in the heart of the ancient Mamprusi kingdom with his wife and their two children. He loves learning Mamprusi proverbs, history, and folk tales, and using those to communicate his faith effectively. He’s known locally as the “Sulimiinsina’akyinnaaba” or “young white men’s chief” and was recently inducted into the Nalerigu chapter of the Northern Ghana Christian Chiefs Association.