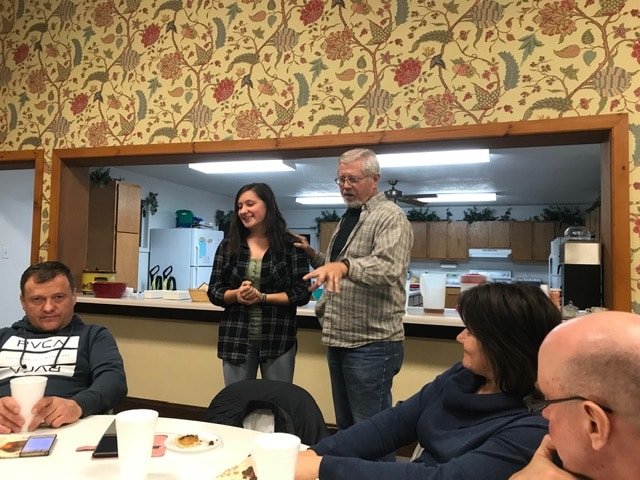 GREEN CITY – PastorRodney Dorr introduces Elena Vimovoi and her parents, Vasiliy and Oksana (seated) who are from Belarus, to the congregation of First Baptist Church, Green City. Pathway photo by Richard Nations

MAYSVILLE – The sermon at First Baptist Church Dec. 8 was in Russian, translated for the congregation by a former IMB missionary. Brother Vasya Vimovoi spoke about growing up in post-Chernobyl Belarus and how his family had been impacted by support from Missouri Baptists as part of a 1994-99 missions partnership.

He is the son of Ivan Vimovoi, pastor of Krasnapolie Baptist Church, who was befriended by former Maysville pastor Rodney Dorr. Dorr has been serving in recent years at First Baptist Church, Green City, and he is about to retire. Vasya is a deacon in a church in nearby town called Kostyuovichi, where he has a concrete delivery business. Vasya’s brother, Sascha, is the pastor of that church.

The family has remained in contact with the Maysville church and with Pastor Dorr for 25 years since the start of the partnership.

The Vimovoi family contacted the Maysville church to arrange for a visit as they would be in the United States, visiting their 16 year old daughter, Elena, who is an international student in Raleigh, NC, staying with a host family there and attending a Christian high school.

Pastor Greg Dixon, said he received the letter written in Russian, had it translated and was delighted to respond to invite the family to northern Missouri. He reached out to former pastor, Dorr who also wanted to host the family he had invested in for many years.

So on Dec. 5 the family traveled to northern Missouri to speak in two area school assemblies and have a soup supper at the Green City church. A translator was arranged from Kirksville (a former IMB missionary, David Cook, who served as a Journeyman in Russia and is married to a Russian immigrant). He translated for the group along with Elena as the Vimovoi family sang, spoke about their country and churches and answered questions.

On Dec. 8 the family was featured in the worship service at the Maysville church.

Dorr said when he traveled to Belarus in 1996 he stayed in a home with only one light bulb in the ceiling. Plumbing accommodations were primitive and Americans were very much a novelty for the people of Belarus. One man asked him ,“Why did you come?” Dorr was the first American who had traveled to that village in the man’s recollection. The gospel was able to be shared because of the effort of the Americans who came to see them.

In 1986 the Chernobyl nuclear reactor disaster occurred in that area which was part of Russia, causing massive radioactive fallout and contamination. Then in 1991, Belarus became an independent nation, as the Soviet Union was dismantled.  All of this was a recent precursor to the Missouri Baptist Convention establishing the mission partnership with the nation of Belarus in 1994. Many Missourians made trips to Belarus and many young people from there were able to travel to Missouri in exchange.

Dixon said he thought the partnership had been active from 1994-99, but their church had remained in contact with Pastor Vimovoi and his two sons since that time. “We have been sending a love gift each year.” He said they supported a youth camp with those funds. “It is unusual for a mission partnership to last that long but it did.”

The Belarus guests told of “ghost towns” that were abandoned near the Chernobyl reactor site, which is still contaminated with radioactive waste. They described having a hard time finding safe food and shelter in those days and that their agricultural lifestyle was disrupted for several years because of the danger of the fallout to their crops.

Vasya described their gratitude this way: “A lot of people would come to my hometown and would say ‘So sorry’ and then leave. But Rodney Dorr came and wanted to return and help. He knows we have the same God that unites us.”

Vasya was accompanied by his wife, Oxsana, as they had been visiting their daughter in North Carolina. Elena had the opportunity to come to the U.S. as a result of an international exchange program where children living in the Chernobyl fallout zone were able to travel to the U.S. in order to strengthen their immune systems and be free of the fallout effects. She was later able to obtain permission to attend high school in the U.S., where she now studies and hopes to remain there for college as well.

The partnership between Missouri Baptists and Belarus Baptists was established 25 years earlier but it continues to impact the Kingdom even today.