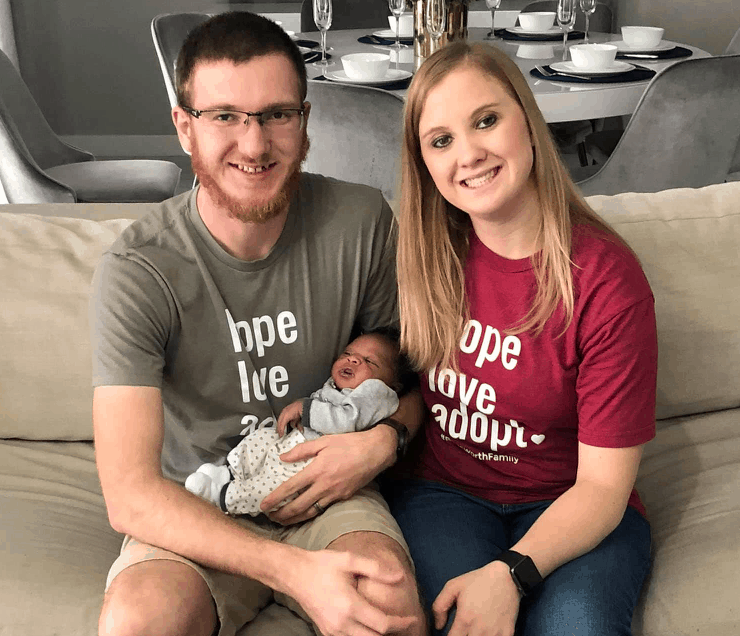 DURHAM – This is a story of a birth celebrated in December. No, not that birth, the Savior, but an adoption with providential seasonal timing.

When John and Lindsey Bedsworth were engaged in Aug. 2015, they began planning a family and married four months later.

“We thought we’d have one child of our own and adopt one or two. There were difficulties. We tried having children for three years unsuccessfully, and invitro fertilization failed in May 2018,” said John, Durham Baptist’s pastor since August, 2018.

They sought out a private agency adoption.

“Two days before Thanksgiving, an attorney called, saying we were accepted by the woman,” Lindsey said.

“He set up a phone call meet-and-greet with her. The first time we met the lady was right before the birth of Cora.  It was a huge blessing she chose life,” John said.

“Our attorney told us to rent a hotel room (Dec. 19). We determined whatever happened, John and I were okay. We were relying on the Lord. Having a baby is not what gets us through things. It is the grace of God,” Lindsey said.

Two hours later, the attorney called back. The baby was theirs. The mother signed over her parental rights.

For a few years, they will send quarterly pictures to the birth mother, then yearly after that.

Getting a child is part of the story. Funding since mid-2019 is another part.

“Two attorneys in our firm work this as a ministry to make costs as inexpensive as possible. Normally, adoption costs $50,000. We ended up paying around $23,000. This was a huge blessing. We probably had about a quarter of that saved up,” John said, adding international adoptions can run about $100,000.

(In this auction, bidders buy a number and put quarters on an auction object to bid. Bidders may spend several dollars, without assurance of getting the product. The winner is determined by drawing a bid number.)

“The quarter auction included Mary Kay and Pampered Chef products, donated within the church. The community came together, and we’d only been in the community about a year,” Lindsey said.

“We never asked the church to do any fundraising, it was always a surprise,” John said.

Durham deacon wives secretly contacted the other 18 churches of the Mt. Salem/Wyaconda Southern Baptist Association, quoting Psalms 127:3 of children being a gift from God, raising about $4,000.

“They went completely behind our backs to help us,” John said.

Lindsey’s Illinois family took a picture of the couple holding puzzle pieces. The picture was cut into jigsaw puzzle pieces, each piece sold with the buyer’s name on the back. It raised $2,500.

“We can show Cora people loved her when they hadn’t met her,” Lindsey said.

“To this point, we relied on others, but God put this together. This is nothing we have done. We are so appreciative for anyone who has helped us,” John said.

On Dec. 23rd, the Interstate Compact on the Placement of Children was submitted.

“Normally it takes seven to ten days, but it was done the same day (giving legal custody for interstate travel),” John said. This shortened a planned stay with Florida friends for paperwork completion.

“We spent Christmas with my side of the family in Illinois. We didn’t tell them, we just showed up and surprised them,” Lindsey said.

“It is important to hear of adoption. There are so many logistics,” she said.

“Also, there are potential moms considering an abortion or giving birth. There are people out there who want to love their children,” John said.

That’s the story beginning – a child at Christmas, and thousands of dollars paid by loving friends, family, and church. The rest of the story is still to be lived and told.