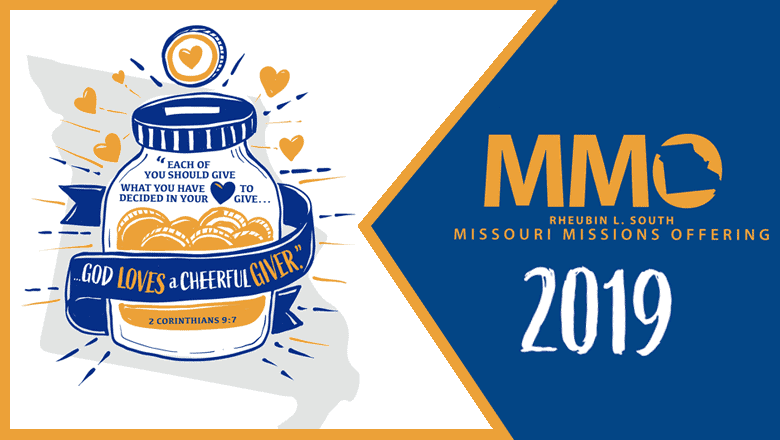 2019 marked the seventh straight year of MMO giving above $700,000. The number of churches contributing to MMO declined slightly in 2019, dipping to 785 from 794 the previous year.

Missouri Baptists responded well to the MMO theme of 2 Corinthians 9:7: “Each of you should give what you have decided in your heart to give, not reluctantly or under compulsion, for God loves a cheerful giver.”

The record offering in 2019 highlights an upward trend in MMO giving in recent years, according to the MBC’s Rob Phillips, who coordinates promotion of the state missions offering.

“First, we want to say thank you to Missouri Baptists and MBC-affiliated churches for their sacrificial giving in support of 16 ministries across our state,” he said. “Every penny given through MMO goes directly to missions projects, with no funds devoted to overhead. This results in a greater direct impact on transforming lives and communities with the gospel.”

Phillips noted several reasons for increased MMO giving in recent years. Most fundamentally, he said, Missouri Baptists have captured the vision of direct support of missions projects across the state.

“When you know that your gifts help foster children find Christian homes, take the gospel to unreached people groups in Missouri, and provide training and field experience for the next generation of leaders, you can see the direct connection between MMO gifts and gospel impact,” he said.

Another key reason for the uptick in giving is statewide promotion of MMO through the Missouri Woman’s Missionary Union (WMU). “It is hard to overstate the value our WMU contributes to awareness of missions in Missouri Baptist churches,” Phillips said. “We are so grateful for WMU’s partnership with the MBC for the cause of Christ.”

Other contributing factors, according to Phillips, include: strong MMO promotion within participating local churches; engagement in the ministries MMO supports, from foster care and adoption to partnership missions; and a more robust economy in recent years.

Examples of the 16 MMO projects that the missions offering has funded for 2020 include:

• The Missouri Baptist Children’s Home; 17 percent of the offering goes to support its ministries, which include foster care, adoption, and rescue from human trafficking

• WMU ministries across the state

• Associational partnerships; 10 percent of the offering from each of the state’s 60 associations is sent back to that association.

Funds raised in excess of the goal are placed in reserve for future missions opportunities. At the same time, 10 percent of the excess is given to Missouri WMU, which promotes state, national, and international missions in MBC-affiliated churches.

Missouri Baptists approved a 2020 MMO goal of $725,000. This summer, the MBC announces the 2020 theme and provides churches with MMO resources.