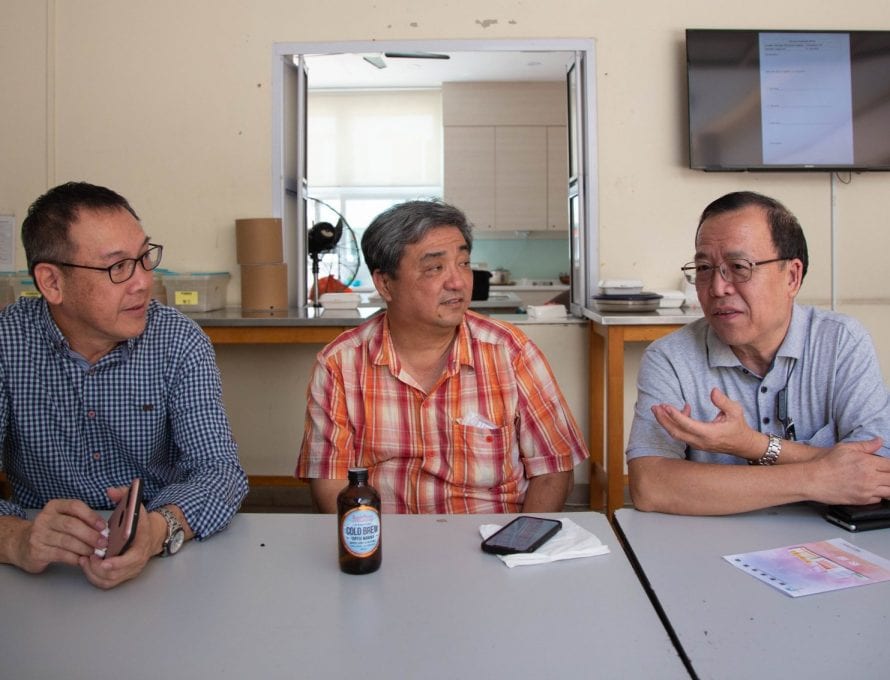 SOUTHEAST ASIA – Three friends at Calvary Baptist Church in Singapore discuss the ways they’ve used entrepreneurship to create opportunities for others to share the gospel. These businessmen are using their influence and resources in missions. (IMB Photo by Caroline Anderson)

SOUTHEAST ASIA —The scent of pine trees and roasting coffee beans permeate the Southeast Asian air. IMB worker Katelyn Summers* keeps careful track of the roasting time. Outside on the terraced hill, high school students, who have traveled from their home in Singapore, lug bags of freshly picked coffee cherries to be processed and dried.

The students came to this Southeast Asian nation to serve as part of their church’s partnership with Katelyn to help introduce the gospel to the people group she is working among.

Katelyn buys coffee cherries from her people group and processes, roasts, and sells the coffee beans. Her coffee sourcing and selling provide the community with a livelihood, and they provide Katelyn an opportunity to share the gospel.

And when the Singaporean students help Katlyn, they carry on the missions legacy of their parents’ and grandparents’ generations.

Calvary Baptist’s history with the IMB began decades ago.

“If you go back far enough, you’ll see the handprints and footprints of the Southern Baptist missionaries,” says Pastor Koh Kok Chuan in Singapore.

In the 1950s, many IMB missionaries came to serve in Singapore after they had to leave their former country of service due to the advent and acceleration of Communism.

“You can say that the door was closed to that nation, but it opened a huge door in Southeast Asia and the East Asian diaspora,” Pastor Koh, who goes by KC, says. “I think Singapore really benefitted from those missionaries that came down.”

Calvary Baptist Church, the church where KC pastors, was started in 1957 by missionaries from the Foreign Mission Board (now IMB). The church was the culmination of the pioneering work of a Sunday school class that met in the home of missionary Lydia Greene. The church building was constructed using funds from the Lottie Moon Christmas Offering®, and the first service in the building was held Dec. 8, 1957. Calvary’s first six pastors, who served over the course of 15 years, were sent and supported by the Foreign Mission Board. Calvary has since been led by local leaders.

Now Calvary has a Mandarin service, a Hokkien-language service, and two English services. The church has grown through the years from 30 chartered members to 700.

In 2011, through their contacts with Baptist Global Response and other missions organizations, leaders at Calvary connected with Katelyn, who serves in a Southeast Asian nation. Over time, through prayer and vision trips, Calvary’s partnership with Katelyn has developed.

Church leaders have made multiple trips to the country. Other teams, like the high schoolers, have also traveled to work alongside Katelyn, and more trips are in the works to come alongside Katelyn in ministry.

At a recent church fair, Calvary members sipped coffee from Katelyn’s farm as they meandered past booths and stalls with a booklet relaying information about the people group and how they can pray and be involved in making the gospel accessible to this community.

Katelyn recently visited Calvary to share about her work, and the church formally voted to join her in a long-term endeavor to see the people group grasp the Good News of the gospel.

In it for the long-haul

Calvary is diving deep into this partnership with a fortified missions strategy and an overall church education on how every church member has a role to play.

Calvary sees this as a generational commitment. Their desire isn’t to bounce from people group to people group, or from one strategy to another. They’re committed to this people group for the long run.

“We’re in it for generations. It’s not just one group of people. It’s the church moving through various generations [of members] to see how God is going to lead us into the work,” KC says.

Missions at your doorstep

Calvary’s goal is to integrate missions into their church’s identity so that missions becomes more holistic rather than compartmentalized.

“If we can learn what we need to do overseas, here, it is very natural for us to do the same [abroad],” KC says. “What you do at home, you must also do outside. And what you are doing in a foreign land, you must bring back. We need to get a mindset that says, ‘Missions is everywhere, and whether it’s at your doorstep, or you’re going somewhere else, we should all be missional.’”

As electric fans work hard to circulate air in the open-air dining area, three middle-aged businessmen share how they’ve been involved in their church’s missions efforts, both financially and through mission trips. The three friends believe they’ve been blessed for a purpose — to share the gospel and create opportunities for others to share the gospel. They are using their influence and resources in missions.

Singapore’s influence and resources have grown exponentially in the nation’s short history. Only 54 years ago, Singapore became their own country and quickly became a first-world nation. The country is now a financial powerhouse with the third-highest per-capita GDP in the world.

“We are an amazing generation, not because we are amazing, but because of the way the country has progressed,” KC says.

“We need to be out there,” KC says. “Our God is a big God. We serve out of that understanding.”

“It’s not just about the church,” KC adds, “but also [about] my own life. When God calls me to do something, it’s no matter of my convenience—what I want to do, my comfort zone. It’s a matter of obedience.”

Caroline Anderson is a writer with the IMB. She currently lives in Southeast Asia. Her childhood in Asia consisted of two important ingredients: braving hot chili peppers and telling people about Jesus.