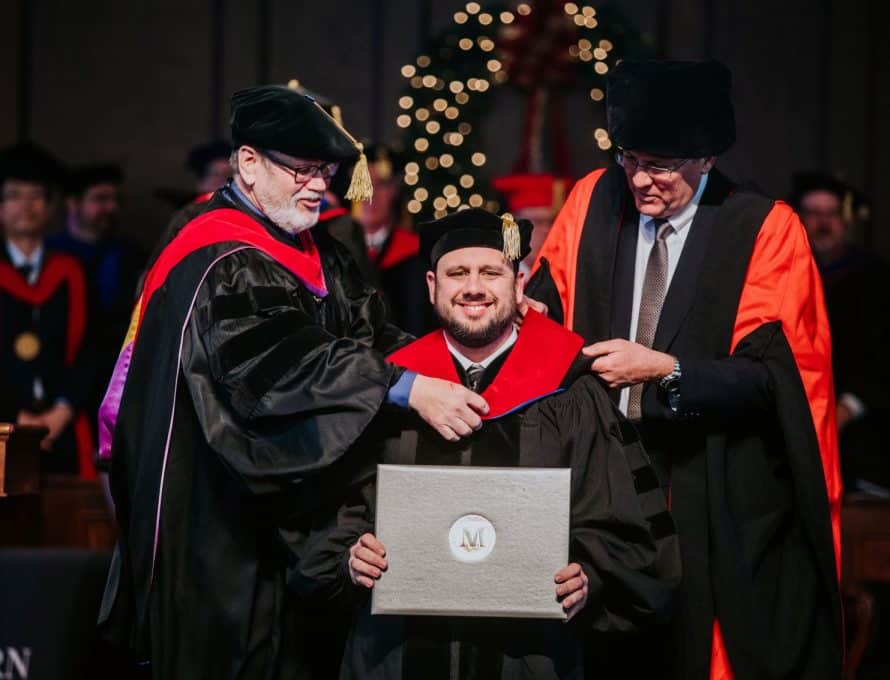 KANSAS CITY – In the same spirit and celebratory atmosphere of the Christmas season, the Midwestern Seminary community celebrated the culmination of its students’ hard work, dedication, and perseverance, as the school held its 66th commencement service, Dec. 6.

Additionally, President Jason Allen announced that the seminary will begin a series of messages—during graduation and convocation service addresses over the next couple of years—focusing on specific doctrinal topics of urgency and relevance.

Two hundred and five students were conferred 222 degrees and began their ministry service as the next generation of pastors, missionaries and ministry leaders. With the enrollment increases the school has made, now surpassing 4,000 students, the number of graduates has also increased, up from the 169 students who graduated this time last year.

Midwestern Seminary also celebrated a noteworthy milestone during the commencement ceremony, as 29 Spanish-speaking church planters earned their Church Planting Certificates. Two of those graduates also received their Master’s in Theological Studies with an emphasis on Pastoral Ministry.

Felix Cabrera, assistant professor of pastoral ministry and Spanish church relations coordinator, helped pioneer the certificate program in 2017. “What happened today is epic and historic. The pilot program is no longer a pilot,” Cabrera shared. “Ministerial experience combined with theological education is an ideal scenario for these pastors who serve in the Dominican Republic, Venezuela, Mexico, Paraguay, Nicaragua, and Puerto Rico.”

“We cannot be more pleased that these men have worked so hard and accomplished so much through our Spanish Language programs,” Allen said. “This is ‘for the Church’ in action, as they will now go and establish local churches and proclaim the gospel of Jesus Christ.”

Kicking off the 10-part graduation/convocation sermon series focusing on significant, urgent doctrinal issues—including topics such as the sufficiency of Scripture, the exclusivity of the gospel, and penal substitutionary atonement—Allen noted there’s no better place to begin than with biblical inerrancy. As such, he preached a message from Jude entitled, “Truths Worth Contending For: Biblical Inerrancy.”

Allen said that, as Southern Baptists, there is never a wrong time to reassert, cling to, and contend for one of our central and foundational truths.

He affirmed biblical inerrancy as the belief that the Bible is without error. “It’s an argument for the truthfulness of God’s word. It is divinely inspired, comprehensively truthful and, thus, authoritative for life and doctrine. It is from this inerrant Word that we can know our inerrant savior, Jesus Christ. …