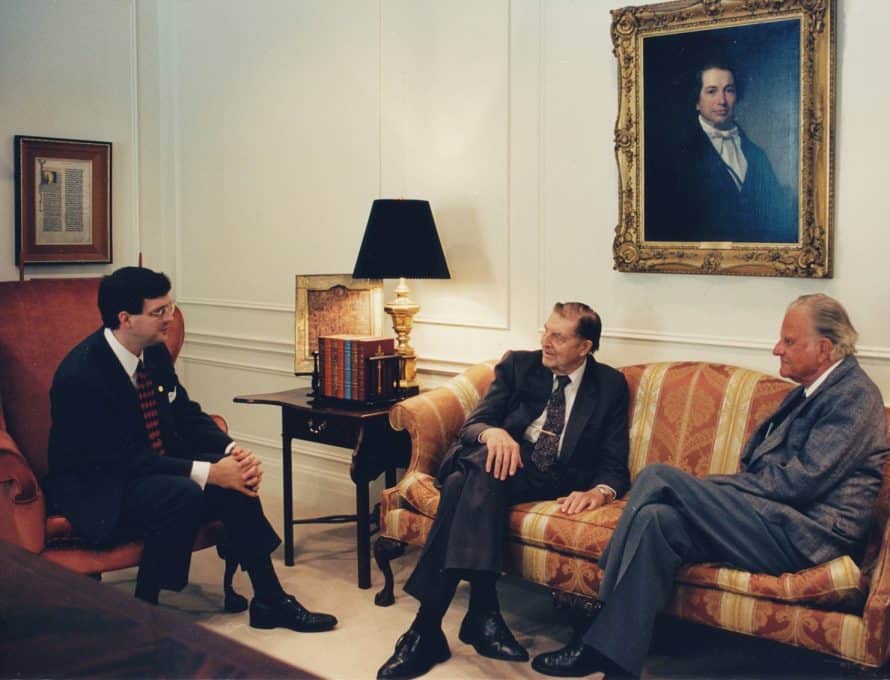 EDITOR’S NOTE: This is the final article in a year-long series, commemorating the history of the Conservative Resurgence of the Southern Baptist Convention (SBC) in honor of its 40th anniversary. To read previous articles, visit www.mbcpathway.com/ConservativeResurgence.

LOUISVILLE, Ky. – After nearly a decade of conservative presidential victories during the Southern Baptist Convention (SBC) annual meetings of the 1980s, the SBC’s trustee boards began to select new conservative entity heads who could lead the convention’s entities to affirm the inerrancy of Scripture.

In 1993, R. Albert Mohler, Jr., was among the conservative leaders chosen to head up an SBC entity – namely, the Southern Baptist Theological Seminary, where he continues to serve as president today.

A few years later, Mohler served as a member on an SBC committee tasked with recommending changes to the Baptist Faith & Message, which Southern Baptist messengers approved in the year 2000. The committee was chaired by Adrian Rogers (1931-2005), former pastor of Bellevue Baptist Church, Memphis, Tenn., whose election as SBC president in 1979 ignited the Conservative Resurgence.

Earlier this year, it was announced that Mohler will be nominated as a presidential candidate during the SBC’s 2020 annual meeting.

In an exclusive Pathway interview, Mohler shared about the significance of the Baptist Faith & Message 2000, about his experience of the Conservative Resurgence and about the legacy of this movement for Southern Baptists today:

You became the longtime president of the Southern Baptist Theological Seminary in the aftermath of the Conservative Resurgence, when newly elected conservative trustees sought a conservative leader for the school. What was it like to take such a position of leadership in the midst of this denominational conflict?

“Well, it wasn’t yet the aftermath of the Conservative Resurgence, though it came after the last big presidential election was contested in 1990. But when I was elected President of Southern Seminary, there were still a good many opposed to the Conservative Resurgence who were on the board of trustees, though conservatives had gained a majority. I understood that Southern Baptists had effectively issued a mandate for all Southern Baptist institutions and, in particular, for the six seminaries. My responsibility was to lead Southern Seminary in such a way that it reflected the conservative theology of the Southern Baptist Convention and did so without equivocation or apology.

“So it was a matter of entering into a debate and argument that I had been a part of for some time. I’d spent the previous four years as editor of the Christian Index in Atlanta. I was elected because people did know who I was and what I would do if I were elected president. So my job in assuming the office was to do precisely that, and, as you know, it was not an easy process. But thanks be to God now more than a quarter century later we can see how the Lord has brought reformation and renewal into the life of the Southern Baptist Convention.

“In the most crucial moment of crisis in the conservative recovery of Southern Seminary, there was a massive protest out on the seminary lawn even as our trustee meeting was beginning in April of 1995. That protest involved hundreds of students and the leadership of more liberal faculty and also attracted many people from the community. There were media helicopters overhead and national news coverage of the event, and it came down to this – and I’m sharing this particular moment because the issue is to whom does this seminary belong? That’s the key question. And that particular incident became crystallizing in pointing out that we don’t belong to the people on the lawn, we belong to the people in the churches. Our responsibility is to align this institution with the convictions of our churches, not with the convictions of the protestors on the lawn. They intended that protest to make a point, and I can assure you that it did, but for me and for the trustees of the institution, it was exactly the opposite of the point they intended to make.”

How extreme were the theological problems in the seminary prior to the Conservative Resurgence?

“Sadly, most Southern Baptists even today do not understand the depth of the problem confronted in our seminaries, and I’ll speak specifically of Southern Seminary. I’ll give just one example. We had a professor who had written a book in which he argued that Christianity needed to be completely reformatted and reformulated and that perhaps monotheism might be retained as a doctrine of this reformulated Christianity. Just imagine that. It was a virtual revolt against Christian orthodoxy. It is not true that all of the more liberal professors held to such extreme positions, but it is true that several of them did and did so publicly.”

You were a member of the committee that revised the Baptist Faith & Message, which SBC messengers adopted in 2000. Why do you feel it was important, in the aftermath of the Conservative Resurgence, to revisit Southern Baptists’ confession of faith?

“Well I think it’s important to recognize that every time the convention has acted on the Baptist Faith & Message, it has acted in a context of controversy. It’s the controversy that has required the confessional clarification. That was true in 1925 when the Southern Baptist Convention was experiencing controversy over evolution and early forms of theological liberalism. It was in response to those challenges that Southern Baptists adopted the Baptist Faith & Message, in the first place, in 1925.

Given all that has happened in our culture during the past two decades, how would you describe the continuing importance of the BFM 2000?

“Well, Baptists from the beginning have been a confessional people. We have been a movement, a denomination defined by certain definite beliefs that have been articulated in confessions of faith going all the way back to the 17th century. But looking at today’s challenges, how would we be able to say what Southern Baptists believe about the crucial doctrines of the day if we did not have a confession of faith? We are necessarily confessional. It’s not just a convenience, it’s not a contrivance, it’s an absolute necessity. To what else would we point when we tell professors you’re going to teach this and you’re not going to teach anything contrary to these beliefs? How would we tell new churches coming into the Southern Baptist Convention, this is what Southern Baptists believe? How would we teach our own church members or our own children what it is that Baptists believe, if we do not have a statement of Baptist beliefs? It’s really important that Southern Baptists have such a statement and stand on and by that statement.”

As Southern Baptists look toward the future, do you have a brief word of counsel about how we can best carry on the legacy of the Conservative Resurgence?

“I think the most important thing to realize is that the Conservative Resurgence, like the Protestant Reformation, is never over. It’s never accomplished. The church of Christ in our age will never be fully reformed and totally pure and faithful, and the same thing is true with the Southern Baptist Convention. We also face new challenges, new doctrinal questions, a newly secularized intellectual context. So it’s really important that Southern Baptists be ready to continue the process of making certain that our institutions, our seminaries, and our churches are faithful to the word of God. That’s going to be a necessity until Jesus comes.”