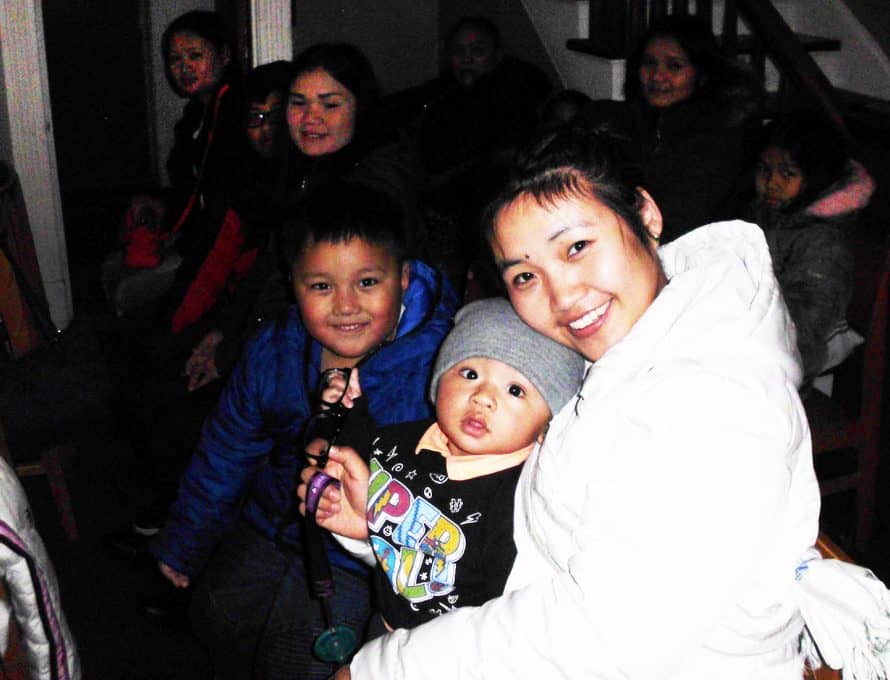 WORCHESTER, Mass. – Boe Paw De, whose family came to the U.S. as refugee from Myanmar, sits with a couple of children during worship services at Worcester Baptist Church, here. More than 20 refugees who attend the church come from Myanmar, a country first reached with the gospel by Baptist missions pioneer Adoniram Judson in the 1820s. Photo provided by Worcester Baptist Church

WORCESTER, Mass. (BP) – It has been 10 years since a group of refugees from Myanmar (formerly Burma) showed up on the doorsteps of Worcester Baptist Church in Worcester, Mass., wearing traditional Burmese clothing and having very little else. They had shown up at the local Southern Baptist church because they were Baptists and wanted a place to worship. The church welcomed the refugees into their worship service and into their lives over the next decade.

The refugees knew little about the United States when they arrived, but they knew one name – a man who had left the state of Massachusetts almost 200 years earlier.

“We didn’t really know anything about them or where they came from, but they knew about Adoniram Judson,” said Bree Cobbs, who now serves as the church’s worship leader. “He had been a missionary who moved to Burma and sacrificed a lot to spread the Gospel there. They celebrated ‘Judson Day.’ And so our church started celebrating ‘Judson Day.’”

On a typical Sunday, the church has about 40 people in attendance, around 20 of which are Burmese.

Judson, a Baptist, had been one of the first Protestant missionaries to Burma in the early 19th century. Besides beginning the first Baptist church in the country in 1827, he also translated the Bible into the Burmese language.

Today, according to the Christian History Institute, Myanmar has more than 2 million Baptists, the third most of any country in the world. Baptists in Myanmar continue to celebrate Judson’s 1813 arrival as “Judson Day” annually in July.

“As the years have gone on, they’ve continued to worship with us,” Cobbs said. “We’ve worked with them to try to help them get jobs. We’ve started ESL ministries. Recently, I’ve even helped some of them buy a home. So in a matter of 10 years they’ve been able to come to a country where they couldn’t speak the language. They’ve gotten jobs, and their kids are in college. They’re buying homes and cars. After everything they’ve been through, they continue to be a blessing to us. It’s been great to watch.”

Refugees from Myanmar, many of them Christian converts of the movement Judson started particularly among the Karen people, have been settling in communities around the United States since the 1960s.

Bernie Michaud came to Worcester Baptist Church as an interim pastor in 2017. He expected to stay for a few months until the church found a new pastor, but the church wanted him to consider becoming their full-time pastor. As he mulled the decision over, he and his wife took a trip to Maine. When the couple realized their hotel had a movie theater, they decided to check it out. To their surprise, the movie was “All Saints,” about a declining church that had become revitalized after incorporating a group of Burmese refugees.

“I’ve never seen a movie about a church, and I’ve never been in a church – other than the church I’m in now – that has Burmese people in it. I’m thinking, ‘Oh, this is just really, really strange,’” Michaud said.

Michaud eventually accepted a call to the church and has appreciated the congregation’s diversity – and its connection to a Baptist missions pioneer.

“I know this has happened probably because of [Judson’s] work,” Michaud said. “He reached a lot of people. There are a lot of Christians in Burma who are there because of his ministry.”

Since the original group of Myanmar refugees arrived at the church 10 years ago, additional Burmese residents have joined the church. Paw Wah and her family arrived in 2013, five years after they moved to Worcester.

As her family planned for the move, she was asked a simple question: “Which state do you want to go to?” Wah had never been to the United States. She and her family had been living in a United Nations refugee camp in Thailand and simply longed to find a permanent place to live. They had no preference, but they prayed God would help them find the right place. Eventually Wah and her family arrived in her new home state with a surprise. Wah realized that the “MA” she had seen in the destination address stood for Massachusetts.

“I told my caseworker that I had known Massachusetts my entire life because on July 2 every year we have a memorial service for Adoniram Judson and he lived in Massachusetts,” Wah said. “I told them, ‘You send me to Massachusetts.’”

Wak said the state’s connection to the man who helped her people hear the Gospel showed her that’s where God wanted her. Over the next few years, some of the refugees left Worcester and moved to other less expensive cities, but Wah believed God would provide for her so she stayed in the city.

Wak believes God did provide for her by introducing her to Worcester Baptist Church. She says she knew quickly the church was the place for her because after the first service when she told the pastor where she was from, he asked, “Oh, do you know Adoniram Judson?”

“The church loved my family and had choir for my kids,” Wah added. “My kids went to Sunday School, and my son became a deacon in the church.”