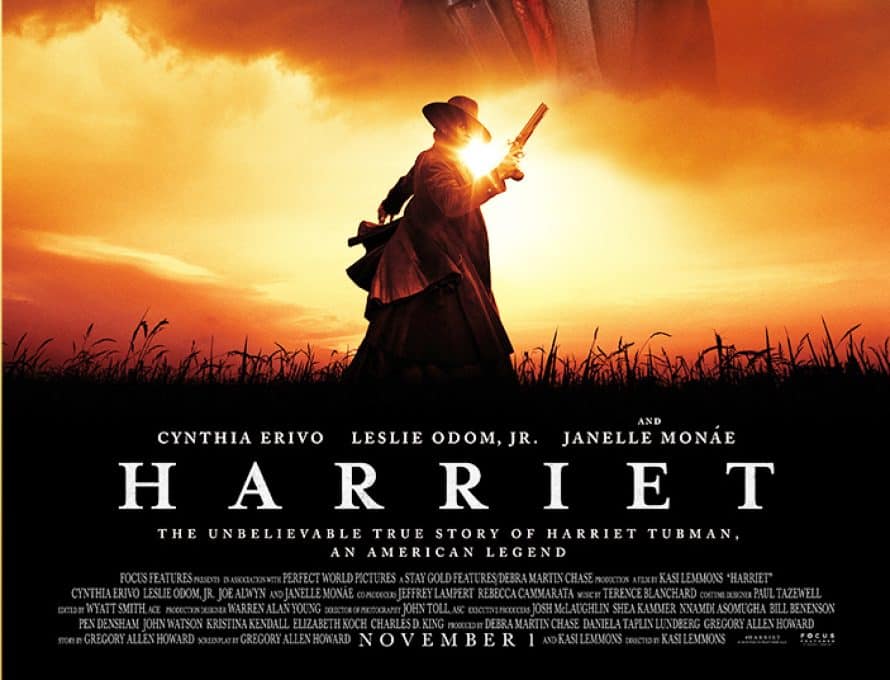 HOLLYWOOD – “Harriet” isn’t a “Christian” movie, but that doesn’t mean this biopic about Harriet Tubman and the Underground Railroad isn’t a movie full of Christian themes and content. Does your family need to get out of the house and get a breath of fresh air over Thanksgiving? You could do a lot worse than heading to the theater to see this uplifting and inspiring movie.

It seems odd to say a movie about slavery is inspiring, but it’s true.

Harriet begins with Minty, a slave woman abused and beaten by her owners. Injustices pile up as Minty – Harriet’s slave name – becomes more and more convinced that God didn’t intend for people to own other people. Ultimately, she runs away and works her way on foot 100 miles north to free Philadelphia. Once there, she refuses to simply enjoy her freedom alone; she insists on going back and shepherding other would-be runaways the way north.

That tension is part of what makes the movie interesting. It must have been tempting to stay safe and far from the slave-catchers and hounds her former owner used to hunt her, but our star – just like the real-life Harriet Tubman – says God has called her back to rescue her friends and family. Indeed, during a 10-year span, she made 19 trips back down south and escorted more than 300 slaves to freedom.

There’s more tension in the way Christianity is used in the film. It’s very clear that Harriet had a strong faith and that it informed her decision. When she makes it to Philadelphia alone, she very loudly and proudly gives God the credit and the glory. But the movie also shows the way Scripture can be twisted and used to support slavery. In one scene, a black preacher standing alongside the owners admonishes slaves to not run away and to be subservient. He pulls out of context Colossians 3:22: “Slaves, obey your human masters in everything. Don’t work only while being watched, as people-pleasers, but work wholeheartedly, fearing the Lord.” (It’s worth noting too many Southern Baptists would have misused this verse in the same way in the middle of the 1800s.) One suspects the preacher wouldn’t be bringing a sermon based out of Exodus or Galatians, at least not while the owners are standing watch.

Later, when Minty/Harriet runs away, it’s this same preacher who hides her in a secret room under the pulpit until he can get her supplies and instructions to the next stop on the Underground Railroad. After she gets to Philadelphia, she takes on the moniker of Moses, saying God has called her to “let my people go.” It’s a story about one woman successfully taking on the institution of slavery, but it’s also a story of how God worked in her life to bring about good.

Harriet is rated PG-13. As you would expect, it shows slavery in a very brutal light, but it’s not as graphic as it could be. We see beatings and blood, but it’s not gratuitous or too much for older children. There is strong language (we hear the n-word several times, and the f-word at least once), though it’s important to note it comes from the slave-owners and is presented in a very negative light.

Cynthia Erivo does a very good job giving life to Harriet Tubman, showing passion and determination when many – even fellow escaped slaves – think her crazy. The rest of the cast doesn’t stand out, but that’s fine. It’s Harriet’s story anyway.

It’s not perfect. We see a lot of Harriet running back and forth from her former plantation in Maryland to her new home in Philadelphia, but I wanted more of the ingenious ways the “conductors” of the underground railroad hid and smuggled those seeking freedom. If anything, her journeys seem too easy (just to be clear, I’m counting this against the movie, not the real Harriet Tubman). The main slave owner is a cartoonish villain who practically twirls his mustache and distracts some from the realism of the story. I suppose if there’s ever going to be a story with a one-dimensional antagonist, this is it.

There are too few movies that show a person integrating their faith so completely into their lives. The fact that Harriet Tubman’s story is as true as it is remarkable makes the movie worth seeing. Even if it can occasionally veer into cartoonish territory, Harriet will inspire you and give your family plenty to talk about.