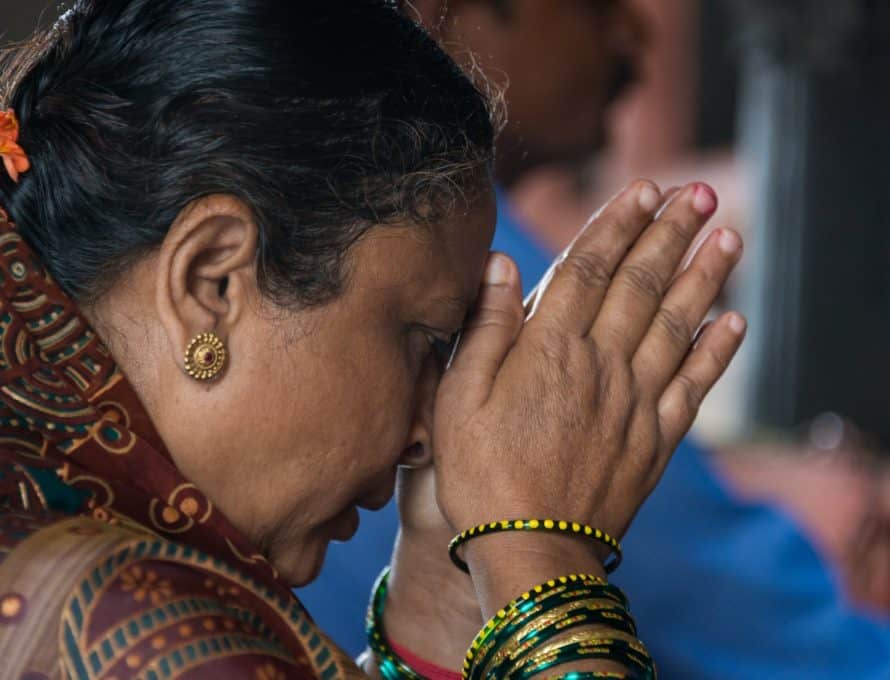 A woman offers prayer to an idol in a Hindu temple in South Asia. (IMB Photo)

SOUTH ASIA – Our translator asked the women to stand if they believed in Jesus. It was the second day of our evangelism training for women in South Asia, and to our surprise, one of the women who had said she was a Hindu the day before, stood on this day. The translator asked when she became a believer, and the lady responded, “Last night.” She said she had never heard the story of Jesus before our first training session, but after hearing about him all day, she went home that night and prayed, and now she believes in him.

At lunch, our translator spoke more with the lady. She found out that the woman decided to add Jesus to her list of gods that she worshiped, not accept Him as the one and only God. After lunch, we gathered the women together to clear the confusion. Our translator showed them in Scripture that we shall have no other gods before God, and when we believe in Jesus, He covers all of our sin, and He is enough. She explained that in order to accept Jesus, we have to reject all other gods.

At this point, tears formed in the woman’s eyes. She explained that her son was deathly ill, and she could not reject her gods because she promised them she would do three acts of worship if they would save her son. She said that she has one more act of worship to do and asked if she could do this third act and then follow Jesus. After the translator explained more, the woman asked if she could reject her gods but ask a family member to complete the acts of worship. She was terrified for her son’s life.

Our team shared the story of Jesus healing the paralyzed man, and we explained to the woman that God has the power not only to forgive sins, but also to heal, and she can trust Him. We also just hurt alongside the woman. I cannot imagine how scared she must have been.

Then we saw God’s power work in her heart. At the end of the conversation, she said, “Even if it means my son’s life, I reject those gods and follow Jesus.”

The proof of the Spirit became so evident in this woman. Immediately after this, the women were sent out to share the good news. We joined together afterward to discuss how it went. Our new sister eagerly stood up to tell us that her group had shared with several women. She even said that the next time she is with her friends, instead of gossiping, she wants to tell them about Jesus.