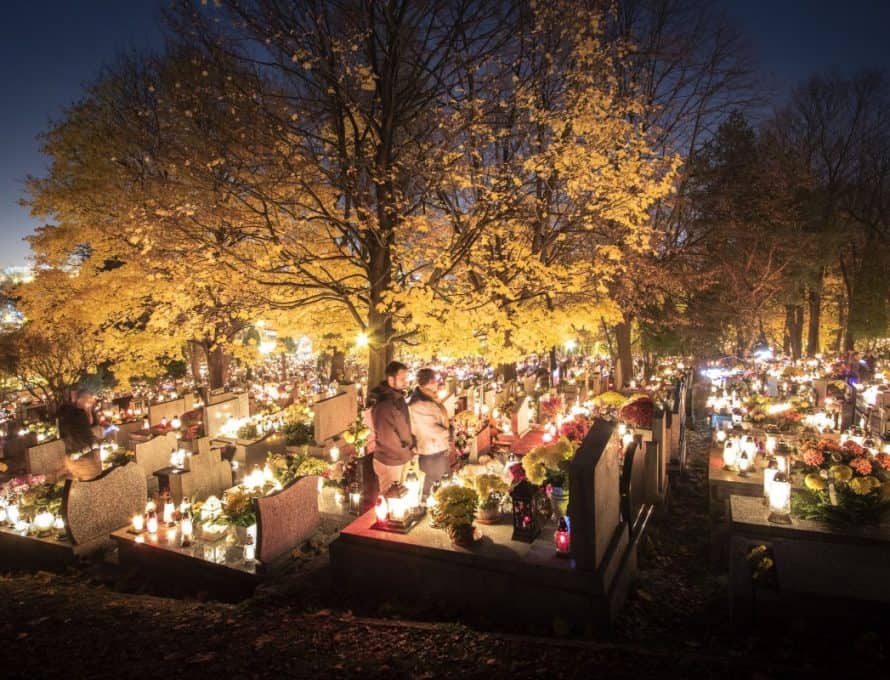 As evening falls on All Saints Day, the glow of thousands of candles spreads through Kraków, Poland’s New Podgórze Cemetery. Families leave candles on the hillside graves to continue a respectful holiday tradition and create a poignant memorial. (IMB Photo by Kelvin Joseph)

KRAKOW, Poland (BP) — I had no idea what All Saints Day celebrated. Two years ago my wife and I moved to Poland, a traditionally Catholic country. As night fell on November 1, the soft glow of thousands of candles spread over nearly silent crowd walking or standing near the graves of their loved ones and ancestors.

We joined a historical tour that took us to one of Kraków’s largest cemeteries. We stood shoulder-to-shoulder with the locals among the booths selling candles and flowers. Families jostled through the crowd on their respectful journeys to visit the deceased. And my heart for this city and its people was transformed.

“You see a lot of solemnness and a lot of emotionlessness, but emotionlessness in Poland is sadness,” a coworker in Kraków told me. “As a believer and someone who loves Poles, you don’t want this sadness to be the future of coming generations of Poles.”

These prayers for the deceased are offered in Catholic Masses and during visits to the graves of loved ones and famous saints. Flowers and candles are also left on the graves and shrines.

Many friends describe how the holiday means so much to their families. It could be the one time during the year that they return to the village where they were born and raised. The masses of people traveling to their home villages or to the large cemeteries in Polish cities make for crowded streets and public transportation on days when nearly every store and public service is closed.

Much of Poland is still rural, with homes bunched into villages between vibrant fields and forests. “We just meet and go to visit grandparents,” Anna said. “This is the only time of the year when people in my family talk about some people who have already passed away. But when we’ve already visited the graves, they remember things from the past, and you get to hear about when your parents were only ten.”

Even evangelical Poles observe the holiday by cleaning the graves of their ancestors and leaving flowers and candles. Using words that an American might use to describe mowing his lawn to keep his home attractive — but with tones signifying the depth of the respect they have for their history and their families — believing Poles mention how they enjoy teaching their children how to maintain the tradition of honoring family members who have passed away. But changing your beliefs about your traditions can be hard.

“I got saved and I realized this holiday doesn’t fit with the Bible. At first it was difficult,” a Polish Baptist friend named Mateusz told me. “Now I feel like I am free. Now I realize it is important to fight for the people who are still alive. Here Polish people are celebrating dead people, but they are not thinking about those who are alive.”

Mateusz described how, as he watches his father’s and his aunt’s health fail, he knows he will soon visit their graves, so he shares the gospel with them and prays for their salvation. He fights for them while they are still alive. But he also wants to teach his two young sons that while it is Polish tradition to respect and care for family who have passed away, this holiday is not important to him, as it once was when he was Catholic.

On top of the traditions of the holiday lies a newer dilemma between Halloween and All Saints Day. Poland is a traditional, conservative country. Only recently, with the help of the internet and globalization, has Halloween begun to be more popular around the world.

Many Catholic Poles still view Halloween not as the eve of All Saints Day, not simply costumes and trick-or-treating, but as something disturbing. “For us, this is still a foreign holiday,” my friend Anna said. “It’s about demons and monsters. …  All of the makeup and costumes are not funny, some of them are just disgusting! When we think about All Saints Day, we want to pray to people who are already in heaven, and Halloween is about scaring children for no reason!”

EDITOR’S NOTE: This article is by Kelvin Joseph, who has lived on the prairies of the American Midwest and in the mountains of Alaska, Asia, and California. Now he lives in Europe with his wife, Elizabeth.