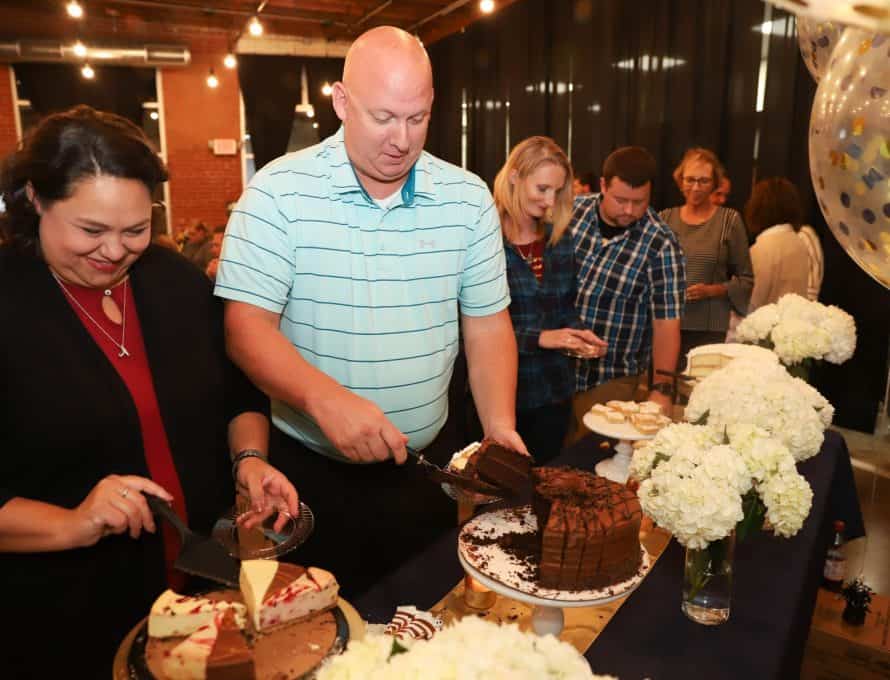 SPRINGFIELD – Springfield-area law enforcement officers and their spouses get dessert at Springhill Baptist Church’s “The Badge and the Bond of Marriage” event here, Oct. 11. Photos by Jen Martin

SPRINGFIELD – Twenty-five officers from six Springfield-area law enforcement agencies had a chance to invest in their marriages, Oct. 11, when Springhill Baptist Church here hosted a one-evening marriage retreat called “The Badge and the Bond of Marriage.”

“Ultimately, our goal was for them to know that they are not alone and that there are churches in our community that love them and are praying for them,” Pastor Jared Proctor told The Pathway. “We just want them to know that someone is in their corner, with their best interests in mind.”

During the evening, Springhill Baptist Church members treated officers and their spouses to a candle-lit dinner, and gave each family a gift package for a separate date night. As the couples ate dessert, Greg White – former Cole County sheriff and now a Missouri Baptist Convention Executive Board member – encouraged them with a message.

“He did a wonderful job sharing about how the Lord had worked in his life and the difficulties he walked through (as an officer),” Proctor said. White told the couples that, as sheep in God’s flock, they aren’t meant to bear the burdens that law enforcement officers often carry as a result of their daily work. Instead, they should hand over their burdens to the Lord.

“The officers, as far as we could tell, all walked away very encouraged and very, very grateful for the evening,” Proctor said. He added that the event encouraged three officers who are members at Springhill Baptist Church by giving them an opportunity to reach out to their colleagues.

“I thought it was an incredible outreach by the church to support law enforcement marriages,” White told The Pathway. “With law enforcement taking as many hits as it is across the nation, I think it’s good to let them know that they are supported.”

Ministry events like this are especially significant, White said, for all public servants – whether they be law enforcement, doctors, nurses, fire fighters, paramedics or other first responders. The demands required of these public servants often take a toll on their marriages.

“And I think,” White added, “that anything we do, from a Christian perspective, to help build the foundation of family and marriage is very positive.”

Proctor said that this ministry was inspired last year when he was speaking with officer and church member Blaine Kennard about the Minister’s Juggling Act, a marriage-retreat for pastors hosted by the MBC. Through the years, this and similar retreats have blessed Proctor’s marriage, so he asked Kennard if a similar ministry for law enforcement officers would be helpful. Kennard agreed it would. And, after the success of this first attempt, Proctor hopes it continues to bless officers’ marriages on an annual basis.