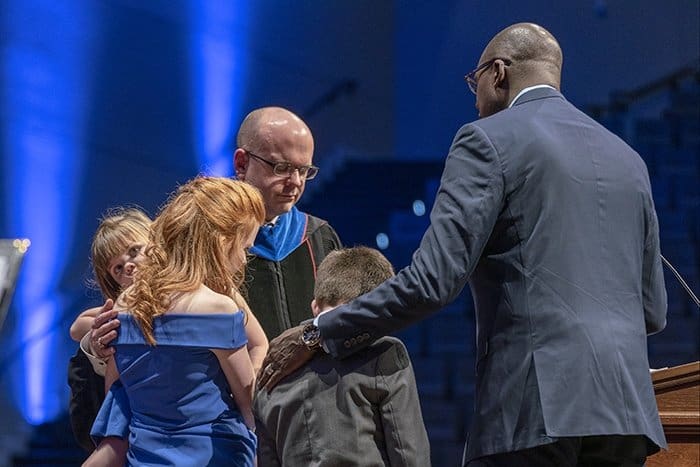 FORT WORTH – Four Southern Baptist Convention entity heads charged Adam W. Greenway to remain committed to a high view of Scripture, to confessional fidelity, to the Great Commission, and to cooperation during his inauguration as the ninth president of The Southwestern Baptist Theological Seminary, Oct. 21. These four elements represented the four pegs of Greenway’s vision for Southwestern Seminary as the “big-tent” seminary of the SBC.

O.S. Hawkins, president and CEO of GuideStone Financial Resources, delivered the first charge, exhorting Greenway to recognize his stewardship of Southwestern Seminary as “a sacred trust.” The institution, beloved by many, he said, has stood on the Word of God for more than 100 years.

“We look back tonight at the great and rich heritage we have of sending those multiplied thousands of people out with no doubts about the Word of God,” Hawkins said. “And we look forward to a bright future of once again seeing this faculty and those who will come to join it train future generations to do the same thing.”

“Paul said to Timothy, ‘Maintain the pattern of sound words,’” Mohler said, alluding to 2 Timothy 1:13. “The Christian church has learned by happy, joyous faithfulness and by the disaster of seeing doctrinal declension that there is no way to maintain biblical fidelity either as a congregation or as a denomination, much less as a theological seminary, than by writing down and stating publicly a commitment to that pattern of sound words. And our pattern of sound words goes back to the faith of the apostles handed to them by Christ and then through the history of the Christian church—all the great essential doctrines of the Christian faith are in our confession of faith as Southern Baptists, the Baptist Faith and Message.”

“On behalf of Southern Baptists, you have to do this for the rest of your life,” Mohler said to Greenway. “This is a life sentence to maintain the pattern of sound words, until one day, each in our own time, we each lay that burden down; and if we do our task well, and have handed on that pattern securely, then there will be another to take the place and to maintain that trust.”

Mohler added, speaking on behalf of the presidents of all the SBC seminaries, that though they woke up that morning as leaders of six different institutions “bearing the stewardship and responsibility to serve one great denomination of churches,” tonight, “all Southern Baptists are Southwesterners.”

“Because of the importance of this occasion and the meaning of this night,” Mohler said, “all Southern Baptists are with you in celebrating this occasion, and our hearts are beating as one. What a pleasure and honor it is to be here together.”

Following Mohler was Paul H. Chitwood, president of the International Mission Board, who encouraged Greenway to maintain a vision for raising up and sending out missionaries of the Gospel. Recalling his time as a trustee of the IMB beginning in 2002, he noted that nearly all IMB missionaries and leaders were Southwestern Seminary graduates at that time.

“The fact that Southwesterners were leading the largest Christian missionary-sending agency in the history of the church was not lost on me; it was all I needed to know about the vision of Southwestern Seminary,” Chitwood said. “… It was obvious that Southwestern had a Great Commission vision that knew no rival in Southern Baptist life.”

Based on this observation, Chitwood shared a “suggestion” with Greenway: “Whatever Southwestern Seminary was doing that resulted in thousands upon thousands of graduates packing a few belongings into a crate, kissing their parents and loved ones goodbye, and spending decades of their lives taking the Gospel to the unreached in Africa and Asia and Europe, Central and South America, do it again.”

He continued, “Whatever Southwestern Seminary was doing that resulted in those same graduates being willing to go to the field on ships and planes and return from the field in caskets, do it again.

“Whatever Southwestern Seminary was doing that resulted in those graduates being recognized as the most passionate evangelists and strategic missiologists, the most effective Great Commission leaders being produced by Southern Baptists, please, for the sake of the lost and dying world, for the sake of the 155,252 people today from the nations who will die and spend an eternity in hell, please, for their sake, Dr. Greenway, do it again.”

Ronnie Floyd, president and CEO of the Executive Committee of the SBC, delivered the final charge, speaking on the topic of cooperation.

“Dr. Greenway, we love you. We believe in you. We stand with you. And we cooperate with you and Southwestern Baptist Theological Seminary to ensure as much as it depends on us in our generation that this good news of the Kingdom will be proclaimed in all the world as a testimony to all nations. Therefore, Dr. Adam Greenway, now is the time to lead.”

Following these charges, James R. Womack, pastor of Destiny Church in Fort Worth, invited Greenway; his wife, Carla; and their two children, Wade and Caroline, to the stage, where he prayed a prayer of dedication over them. Womack specifically prayed for the Greenways as a family, that God would give them spiritual protection resulting in a strong marriage and a godly household.

“We see in Dr. Adam Greenway the evidence of God’s favor, not just toward Southwestern Seminary, but also to Southern Baptists nationwide,” said Greear in a pre-recorded video message. “He is giving you a very capable leader for a very incredible hour. [Dr. Greenway] is a man who loves the Gospel, who loves Southern Baptists, and who loves lost people. Somehow, he combines academic erudition with a genuine leadership intuition. … He is able to combine wicked smart and genuinely likeable, which is something that is very rare in leaders of his caliber.”

“I am praying that Southwestern would be a place where students are poured into and equipped so that they can be sent out into every part of the world,” Greear said, “because that is the vision of the Southern Baptist Convention and why we exist. I truly believe that Southwestern’s greatest days are ahead, and I think Dr. Greenway’s installment is evidence of that.”

“Dr. Greenway, we are so grateful that you have heard God’s call to come back home to the dome and to lead our seminary forward,” Graham said. “[God] has an unusual ability to take a generation in one hand and a future generation in another hand, and to bring us together. And God knows we need to be brought together in our nation and in our Southern Baptist Convention.”

James T. Draper, president emeritus for LifeWay Christian Resources and chairman of the Southwestern Advisory Council, delivered the final greeting, assuring Greenway that prayers were being lifted for him.

“We’re praying God will give you wisdom and grace,” Draper said. “We’re praying that He will open every door for you of favor wherever you go. We pray that God will use you to build the spirit of Southwestern and the spirit of those who founded it in the face of passion for evangelism and missions. And we believe that that’s where we’re headed, and the best days are ahead. So, we say thank you, welcome, God bless you.”

Following his presentation, Levant placed upon Greenway his presidential medallion, symbolizing the authority vested in him by the seminary’s board of trustees. The medallion features the iconic dome of the Memorial Building as well as the seminary’s historic location of Fort Worth, Texas.

“Dr. Greenway, as this medallion rests on your chest,” Levant said, “it will show the world what we already know to be true—that you hold Southwestern Seminary near and dear to your heart.”