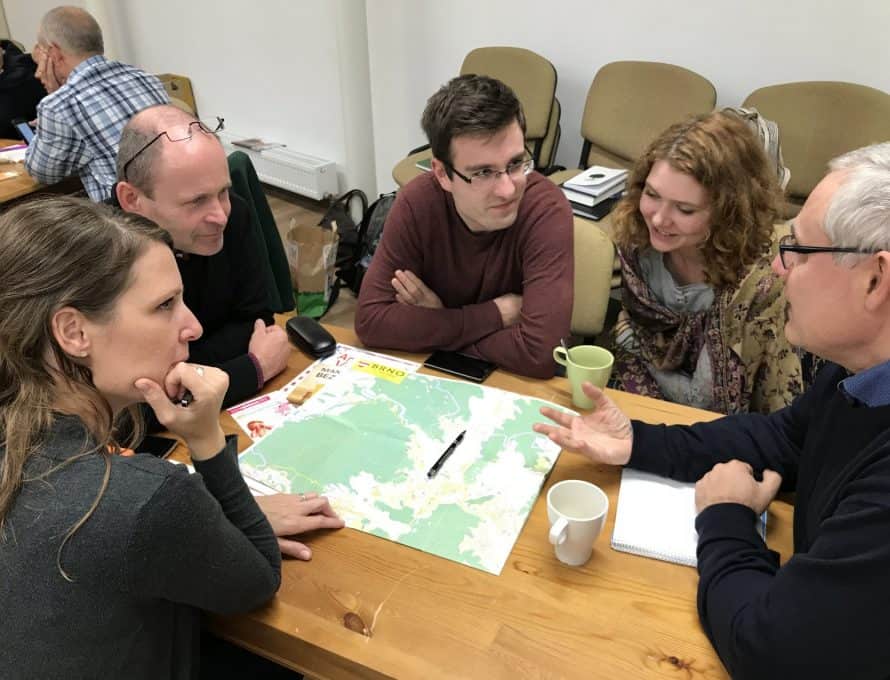 CZECH REPUBLIC – Tears of joy flooded Stan and Abbey Wilcox’s* eyes. It had been years since these IMB missionaries lived in the Czech Republic. Back then, the spiritual darkness had been so overwhelming at times. And now— Were they hearing this correctly? Were two people they had never met thanking God publicly for leading them to start a church where Stan and Abbey had prayed nearly a decade earlier?

Eight years ago, Stan and Abbey took a volunteer group of US teens to see what God was doing in the city of Brno, about an hour from where Stan and Abbey lived. The group spent a day in Bystrc, a district of Brno, where they picked up dog feces that littered the sidewalks and prayed over the area. They also sang, which drew curious looks from people who poked their heads out of their apartment windows to determine the source of the foreign music.

“Looking up at all the people, we just prayed that God would reach them, that he would do something in that area. Then we left,” Stan said.

A few years later, God led Stan and Abbey’s family to move to Italy. Their day in Bystrc was a distant memory—until they heard the story of fellow IMB missionaries Stephen and Jennifer Folker.

Stephen and Jennifer moved to Brno with their children in 2015. A year later they asked their local pastor about planting a church in another part of the city. Soon God directed them to Bystrc, an area with more than 25,000 people and no evangelical church.

In 2017 Stephen and Jennifer led a group from Brno Baptist Church in a study of the book of Acts, and together they began hosting outreach events in Bystrc. This small group of people took ownership of ministry opportunities and became their core ministry team with a vision to plant a church in Bystrc.

Then in 2018 the Folkers and another family from their local ministry team moved out to this part of Brno. They had no idea about Stan’s, Abbey’s, and the volunteers’ prayers in Bystrc until the Folkers shared their story with a crowd of IMB workers. They met Stan and Abbey afterward and responded with awe to God’s faithfulness.

“We are here [in Bystrc] working, propped up on the shoulders and prayers of those who have served God before us,” Jennifer says in an online prayer group where she recounts this experience. “Thanking God this morning for Christians who pray.”

Pavel Coufal, pastor of Brno Baptist Church, recalls the years of prayers he and other Christians have lifted up for the people of their city.

“Our Brno church has been praying for our city and suburbs (including Bystrc) for decades. For several years we had our AWANA ministry there,” he says in the online prayer group. “God has his own timing. He puts things together and opens a door. Let us pray even more.”

Join the many who have prayed for decades over the people of Bystrc, and all of Brno, Czech Republic.

“The prayers of national partners, churches in the US, [and] … those who participate in mission trips matter. These prayers are being heard and answered by the Lord,” Jennifer said. “We are thankful for their partnership and God’s work to bring the nations to know him.”

EDITOR’S NOTE: This article is by Libby Donaldson, who writes for the IMB from her home in Prague, Czech Republic.