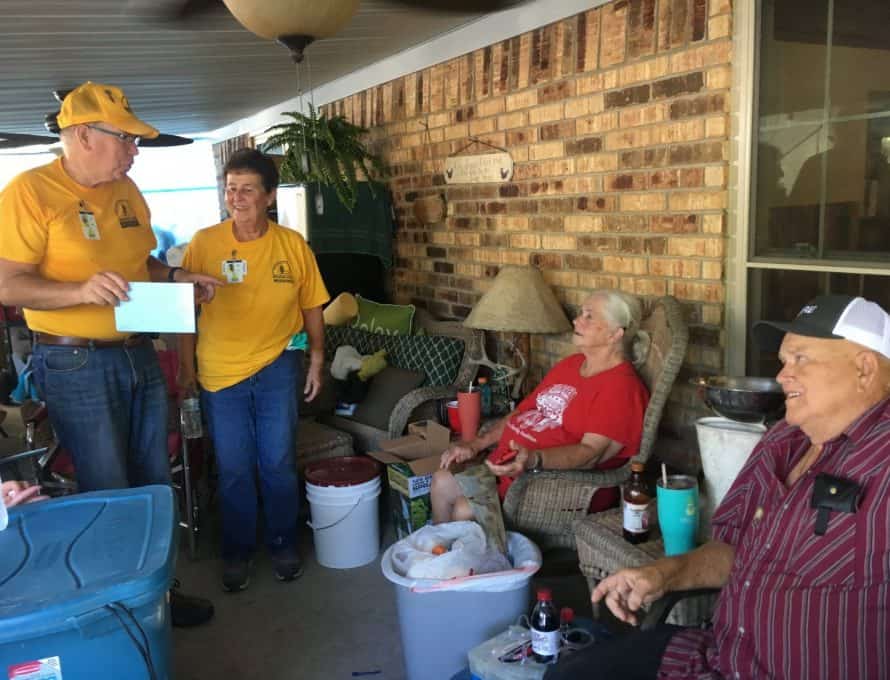 From left, Jon and Molly Rayner with Jackie and James

ORANGE, Texas – The traditional gift for a first anniversary is paper. Tenth is tin. By 50, a couple is up to gold and at 60, the supposed gift is diamond. And for one Texas couple, their 62nd wedding anniversary “gift” was 9 inches of water in their home.

James and Jackie’s home was flooded last month by Tropical  Storm Imelda, casting a damp cloud over what should have been nothing but a joyous celebration of their 62 years of marriage.

Fortunately, God had another gift planned for the long-time couple in the form of Missouri Baptist Disaster Relief.

Jon and Molly Rayner, who split their time between Ellisville and southwest Florida, were among a group of seven Missouri Baptist Disaster Relief volunteers who traveled to the Texas gulf to clean up and offer help, hope and healing last month. While there, the mudout team helped homeowners clean out and disinfect five homes. That’s how they met James and Jackie.

While working, they spent time getting to know the couple.

“Jackie in particular was just discouraged and down,” Jon said.

Molly, who serves as a DR chaplain, spent hours talking with and listening to Jackie, letting her vent the frustration of all the water-logged furniture and soggy insulation (and this just a few years after they had two feet of water inside during Hurricane Harvey).

“After two days of working there, their spirits were considerably brighter,” Jon said. “Jackie was smiling and she wasn’t smiling when we got there that first morning.”

When the team learned they were there on the couple’s wedding anniversary, they decided they needed to get the couple an anniversary card, which made it a special occasion not just for James and Jackie, but the Missouri DR team as well.

“By that time, they knew us and were smiling and happy,” Jon said. They were appreciative not only that we were doing flood relief, but taking an interest in their lives. That’s when we heard the story of how they got married when she was just 14. He had just gotten out of the Army and they had to get permission from her parents.”

Jon and Molly said it’s touching peoples’ lives, making this type of connection and pouring out God’s love that makes the hard work worth it to volunteers like the Rayners, whether it was flooding in Texas, mudout in South Dakota, or clearing out soggy basements in New York after Super Storm Sandy.

“We have been a lot of places and feel that this is what the Lord has called us to do.”

Though Missouri teams have all returned from Texas, other disasters keep Disaster Relief teams busy.

Four DR leaders from Missouri traveled Oct. 22 to the Bahamas to meet with local Baptist leaders in order to determine how volunteers can help them as they recover from Hurricane Dorian. Already Missouri Baptists have sent $10,000 to help with relief efforts.  Missouri Baptists can help by praying for the churches and DR volunteers as they serve those in need. Donations can be made online at mobaptist.org/disaster-relief-donation.